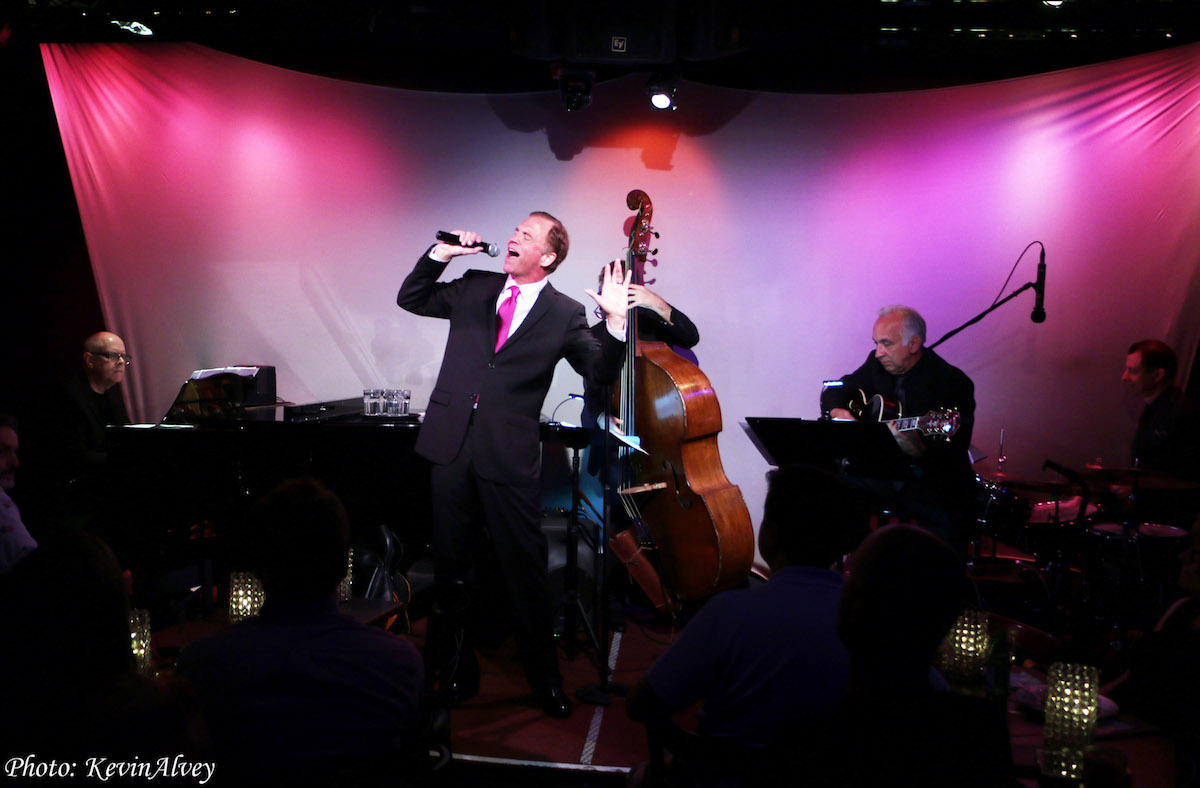 Roger Schmelzer may have come to singing belatedly, but during his New York debut at The Metropolitan Room he turned the songs he loves best – an amazingly diverse compilation – into a most enjoyable hour. Roger’s a very optimistic chap, slender and trim, traditionally and respectfully attired in a beautifully cut suit, starched white shirt and a red tie, as befits a man with an impressive day job as President & CEO of an organization whose members provide thousands of people whose insurance companies are bankrupt with timely payments for food, rent and medical care till the ends of their lives.

Roger’s also much handsomer in person than on his internet photos, especially the one of him in the cap and gown delivering the alumni commencement address to graduates of Indiana State University, his alma mater. The speech itself is well worth reading and thinking about. In it, he espouses his belief in “the power of and” which helped him recognize that his lifelong love of music is where he lives emotionally and that the greatest tribute we can give to one another is a full expression of who we are, who we want to become. In his spare time, Roger serves on the board of the Great American Songbook Foundation, founded by Michael Feinstein, and  helps fund a charity that funds promising research to cure childhood cancer. On stage, he’s confident, charming and original. He brings dedication and skill to his art. He quickly connects with his audience thanks to lively and lush arrangements of melodic tunes with clever or meaningful lyrics that span a time frame between last century and now. Roger brings a crisp, upbeat, fresh sound to neglected pop classics like “Pardon me, Haven’t We Met?” a lovely, lilting waltz dating back to the 1970’s when melody still mattered a lot.

Roger doesn’t dance, but his lithe body and the way he moves on stage reminds me of Fred Astaire and I easily imagine him packing one of the lounges on a Queen Mary transatlantic crossing, singing romantic ballads from his repertoire like “I Thought About You,” a Jimmy Van Heusen tune with lyrics by Johnny Mercer, The Southland’s Robert Frost, or the sophisticated full of longing “I See Your Face Before Me,” by that most sophisticated duo, Dietz and Schwartz. Then on to “Day by Day,” “But Beautiful,” “She Loves Me” and “Just in Time,” before admitting, “I’ve exhausted the romantic love thing.”

He talks briefly talks about himself. His father was a middle manager at Western Electric who loved to play and sing hymns at the chord organ in a white tee-shirt shirt and Jockey shorts. His father inspired him and he honors his father with Maltby and Shire’s, “If I Sing,” from Closer than Ever:

If I sing you are the music. If I love you taught me how.
Every day your heart is beating in the man that I am now.

He’s also concerned about children having to overcome challenges like bullying or responses that make them feel worthless, which he sings, to help counteract that kind of negativity called, “It’s Only One Person’s Opinion,”(written by Brian Gari) In the audience beaming like proud Moms were his longtime wife, Cindy Phillips, an actor, and Marilyn Maye, who directed this show. Marilyn Maye met Roger when he attended her master classes and has become a fan and mentor. Their devotion involved in creating this performance is very evident. It was a pleasure to see “the power of and” in musical motion.