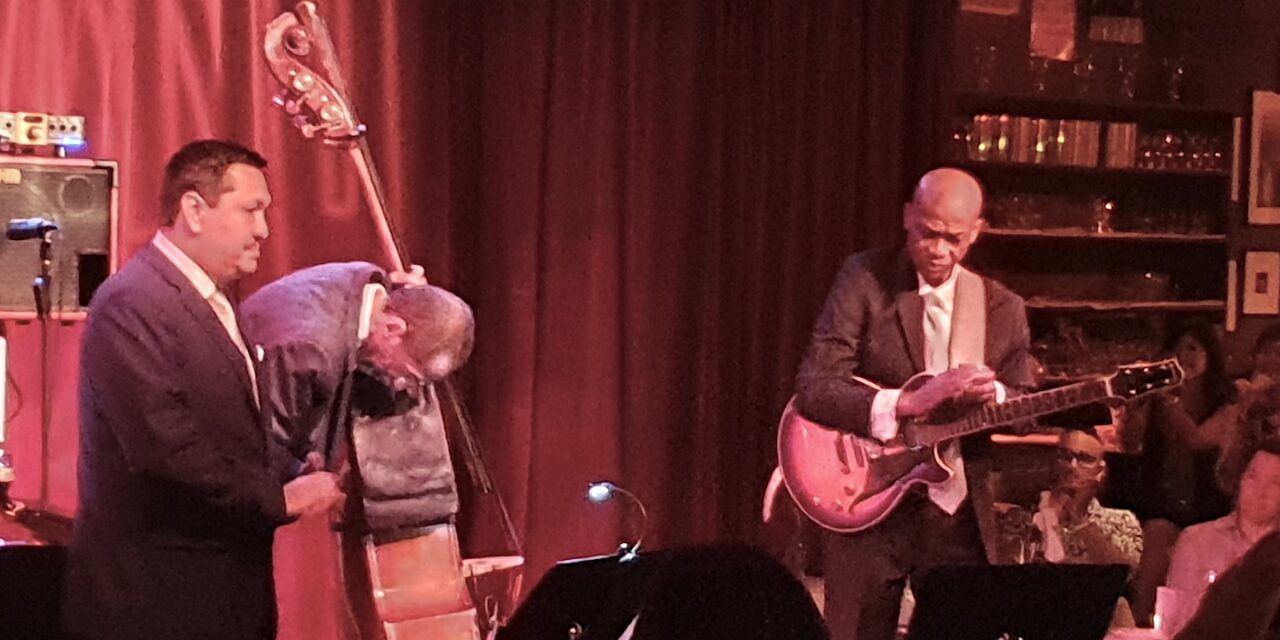 This was a serious night for jazz at Birdland on October 7th.  “No photos or videos,” the audience is implored.  It’s a rare night here to catch a top-billing jazz cat who was around when the original Birdland was still on 52nd Street.  “Legendary” is a bit overused these days, but Ron Carter, America’s most recorded bassist with some 2,221 credits to date, a member of Miles Davis’s “Second Great Quintet,” is a giant among giants.  At 84, he stands nearly as tall as his double bass, with a wise, regal bearing, dressed in a suit and tie, old school.  Carter, the “Golden Striker,” in the fourth night of a five-night stand at Birdland, commanded a full house for the first of his two separate sets.   Like most jazz greats, he drew other musicians who came to watch the master at work, including bassists Saadi Zain (who is a long-time student of Ron Carter) and Brandy Disterheft, who played in the previous set with the Birdland Big Band.  “He really sets a mood,” Brandy told me afterwards.

Fronting his “Golden Striker Trio” with pianist Donald Vega and guitarist Russell Malone, Carter plays with the energy of someone half his age.  His speaking voice, worn and weathered after a lifetime of club dates, was difficult to discern, and he kept any patter to a minimum.

Carter opened with his own composition, “Eddie’s Theme,” a long piece that started and ended with a pared-down George Shearing-like supper club sound.  Malone played a precise, single-note solo with heavy use of the plectrum before plucking a chord progression.  In the quieter moments, one could hear a pin drop thanks to the acoustics at Birdland, along with an attentive crowd.  When Malone wasn’t needed for solos, he largely played his hollow-body electric guitar with the sound off, so that one could hear just Malone’s pure rhythm driving the song.  Carter saved his own solo for last here.

A long-time fan of bossa nova great Antonio Carlos Jobim, Carter dedicated “Hold Us Fine” to him.  A bossa waltz, it doubled in time from 3/4 to 6/8.  The piece ended in what sounded like a heartbeat.

The only song older than Carter himself was the standard “I’m Confessin’” (Doc Daugherty/Ellis Reynolds /Al J. Neiburg).  He played the entirety of the melody on bass, followed by a playful exchange between bass and guitar.  Carter approached this song like a singer, even playing himself out with a tag.

“I challenge the first ten people to name this song.  Call it out.  But don’t embarrass yourself like someone did the other night!”  He played the melody to “My Funny Valentine” (Richard Rodgers/Lorenz Hart) but there was no trick.  He was just having a little fun with the audience.  The arrangement here provided several different approaches to the same song.  Carter and Vega played off each other like two sparring fighters with a bit of a counterpoint between their two instruments that seemed to push and pull their duet.  Malone provided a waterfall effect from his guitar to set up a sensational long solo by Vega while Carter and Malone looked on.  Vega combined jazz chords with what resembled a reimagination of the song as a Bach sonata, at times bringing a harpsichord-like tone to the piano.

“This is our thank you song,” Carter said, before launching into the most complex song of the set, Fletcher Henderson’s “Soft Winds.” The trio again took on the supper club jazz sound, playing in unison with stops.  The tempo doubled and then tripled to the pace of a chase scene in a noir movie.  One could almost see a sedan racing around the Hollywood hills.

The trio closed with a brief encore of “There Will Never Be Another You” (Harry Warren/Mack Gordon) that seemed apropos, as there will never be another Ron Carter.  Now that’s jazz! www.birdlandjazz.com