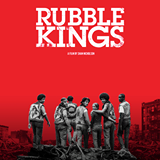 Narrated by John Leguizamo, the film depicts the tough neighborhoods of the Bronx, Brooklyn, and Harlem. As buildings collapse and arson is on the rise, neighborhoods are filled with rubble. The people who took to the streets (and made them their own) provide the through line in this 70 minute film about rage and fury.

Story after story, people like “Yellow” Benji Melendez and Afrika Bambaataa recall a time of gang rule, with warring factions and shattered dreams. Interviews from Former Mayor Ed Koch, Felipe Luciano, Harlem Cody, and Jazzy Jay round out a larger picture of the people and the times. It’s a world of jarring images, when rival leaders could cling to their own. The images on the screen bring us back to the sixties and South Bronx. What you say and do speaks to your credibility in the land of Rubble Kings. Bell bottoms, colors, and gang signs fly from the rooftops to the crowded sidewalks.

Who you choose for President, Vice-President, and Warlord speaks to your organization. In the film, cartoons intersect with real live people reminiscing about their early years. The one-to-one interviews, of men and women often divided as they decide how each area will rule, are more factual than alarming. Narration from John Legizamo is spare, and carefully woven throughout the film. Never too fierce or ferocious, his voice is a smooth and subtle presence in this documentary.

The subjects describe their late 60s and 70s, and what brought about a shift in the early 1980s. Change was in the air when all invited gangs were asked to speak at a local community organization. Forces allied, and differences were put aside. Through talks about shared experience, gang leaders addressed conflicts, and paved a way for a better New York. Filing the streets with hip-hop, they found a way through urban blight towards a better City. Music from Afrika Bambaataa and other leaders provided new options in a post 1980s world.

Though the end of the film is uplifting, it seems too easy. Music can save people’s lives, but missing from the screen is the through line of how those gang leaders achieved the impossible. The struggles toward creating peace are not found in the documentary. Filmmaker Shan Nicholson is quick to point out that people can leave their troubles behind and get up and dance, but there is no discussion of how the subjects worked with law enforcement to turn away from the violence.

It’s a great look at the New York streets, though, and a documentary worth seeing. Rubble Kings opens June 19, 2015 in New York (AMC EMPIRE 25), Los Angeles (AMC BURBANK 8), and Chicago (AMC COUNTRY CLUB HILLS 16), with a wider national release to follow. It is produced by Dito Montiel, Michael Aguilar, and Jim Carrey.