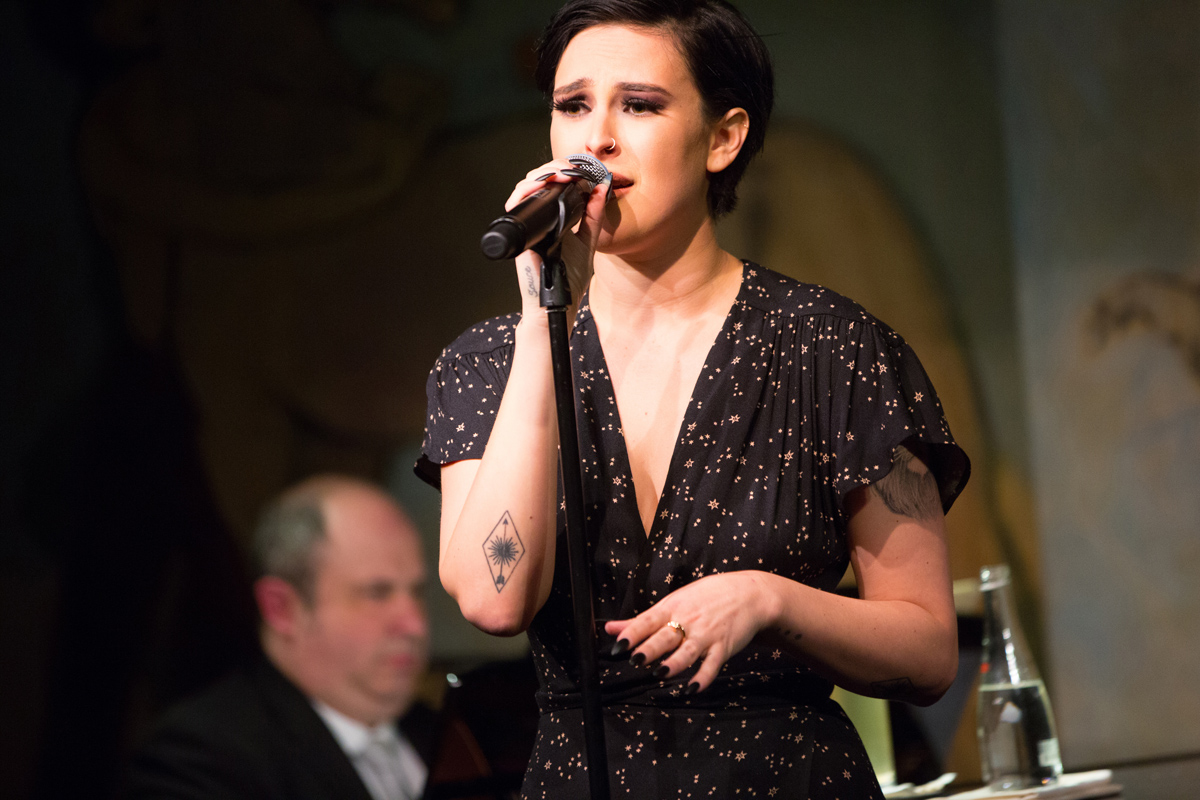 Audiences attending The Café Carlyle are in for a surprising treat this week. The Café, located inside the exceedingly elegant Carlyle, A Rosewood Hotel, has been the Upper East Side’s resident hot spot since 1955. Known for such talents as Woody Allen and Bobby Short, the venue has also hosted a slew of Broadway veterans, including Sutton Foster. Megan Hilty and the legendary Chita Rivera are upcoming stars scheduled for The Café. Understandably, Rumer Willis’s Café Carlyle debut certainly comes with a fair amount of pressure. Channeling a vibe in the spirit of Billie Holiday and Etta James, Ms. Willis relies on her sultry vocals and serene spirit, allowing her talent to shine through on her opening night.

Rumer started acting as a little girl in feature films such as Striptease and Now and Then, with her mother, Demi Moore. Moreover, many will recognize her as the 20th season winner of Dancing with the Stars, which paved the way to her starring role as Roxie, in Chicago on Broadway, for a limited engagement. At the young age of 28, Ms. Willis is no novice to the music scene. 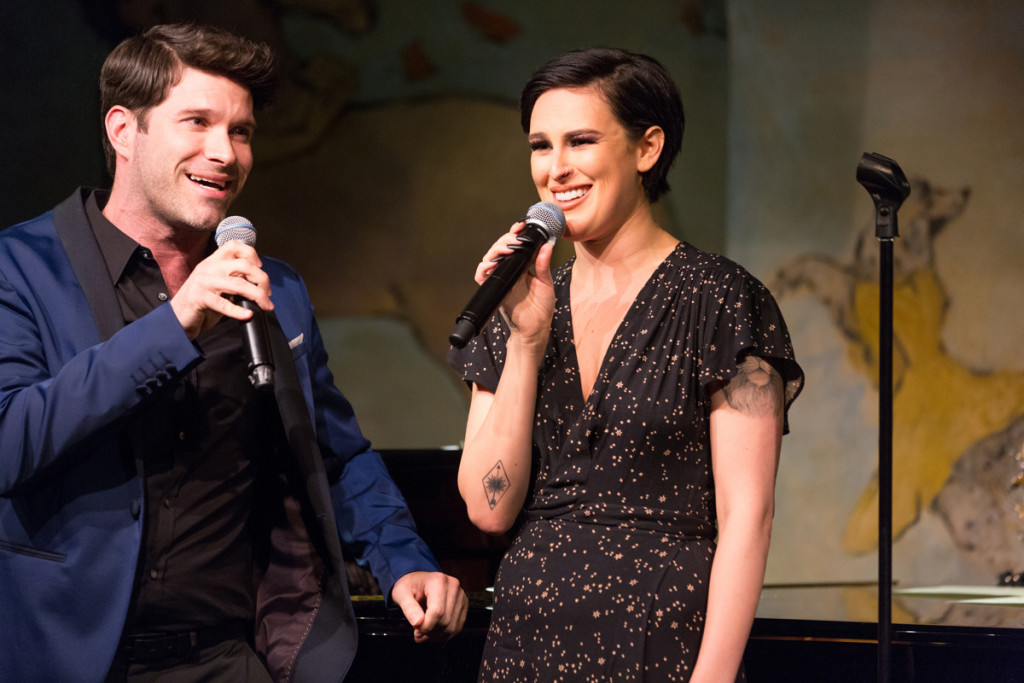 While her time on Broadway may have sparked an interest in the swagger of New York cabaret (including a stint last year at Feinstein’s/54 Below), she has made quite a name for herself on the West Coast. Rumer, alongside her band, had the opportunity of performing as artists in residence at The Sayer’s Club, one of Hollywood’s most prominent venues. Concurrently pursuing her music in Los Angeles, she appeared on TV shows Workaholics and Hawaii 5-0 and films House Bunny, Sorority Row, and Diary of Preston Plummer.

Nonetheless, I think Ms. Willis really came into herself and found her niche at the Café Carlyle. Surrounded by original murals by the French Marcel Vertes (Oscar-winning art director of Moulin Rouge), grand piano monogrammed with the Café Carlyle’s logo, and scrumptious food and drink flowing, Ms. Willis, in her black chiffon and V- neck gown with gold detailing, seemed to fit like a glove. 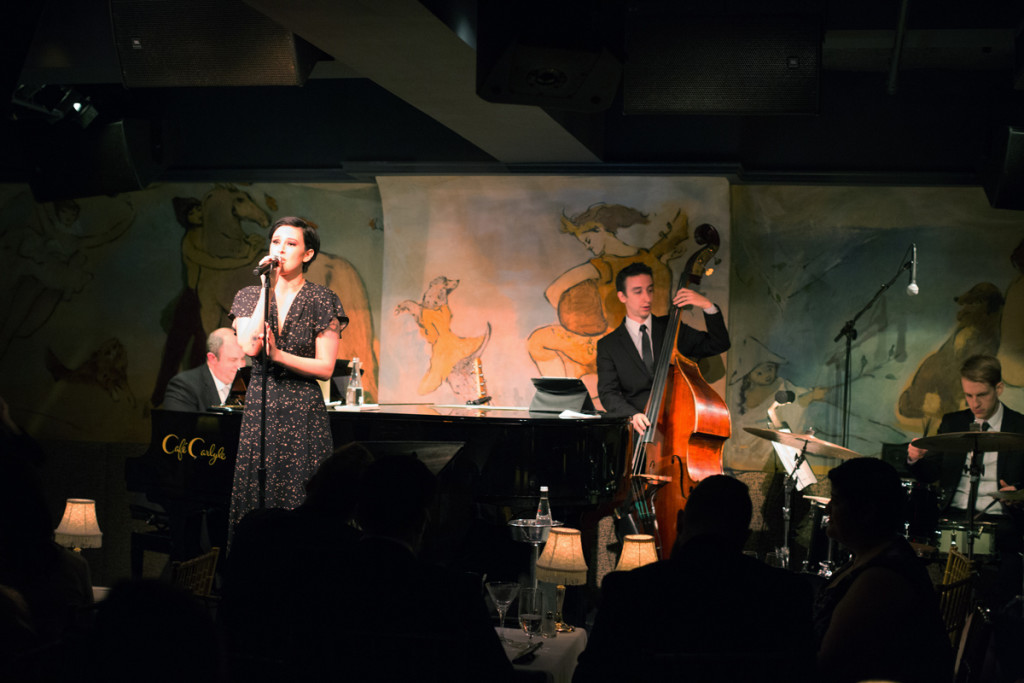 Leading with Kander and Ebb’s “Maybe This Time,” she approaches a little shy. There is an undeniable certain charm, however, that draws you in and leads you to hope for more. Ms. Willis reveals the thesis of her show as the trials and tribulations of love, which segues into the standard, “A Sunday Kind of Love.” In this and the subsequent Latin tune, “Sway,” she begins to open up, relaxing and having more fun with the audience. The only distracting aspect is that she could pull back from the microphone a touch on her money notes (which are so great!) Ms. Willis then takes us back with the slow and smooth Buddy Johnson song, “Since I Fell For You.”

Her personality ups the ante when she introduces her next song, Doris Day’s “Perhaps,” as the anthem for a millennial generation where courtship is indeed a game. It’s expressive, sexy, and smart, including a little singing in Spanish (also earlier in “Sway”). Then we flash forward to the Amy Winehouse hit, “You Know I’m No Good,” channeling the much missed smoke and mystique.

From the fun blend of Ruth Hall and Hank Penny’s “Bloodshot Eyes” and the vampy Fiona Apple smash “Criminal,” to a plucky tune addressing dating older men and the powerhouse Maria McKee number “If Love Is a Red Dress (Hang Me In Rags),” you would think Ms. Willis had covered all her bases. Yet another surprise follows as Tye Blue, her music producer and best friend, joins her for a duet of Chicago’s “Class.” Drawing to the closing number, she reminisces about how she was drawn to the song “God Bless the Child” years ago, although not realizing why until very recently. The resonance she articulates with music’s higher purpose is certainly profound in her work. In addition, she reveals her father, Bruce Willis, played Billie Holiday and Etta James for Rumer as a child, shedding light on her blend of sound.

The closing song is a jazzily percussive version of Hozier’s “Take Me to Church,” one of her favorite songs she danced to on Dancing With the Stars. Of course, she gives an encore: a pop/rock tune, “The Story,” by Phil Hanseroth – a variance from the overall genre of the evening yet a knockout in every sense of the word.

To see Ms. Willis in action, visit the Café Carlyle thru April 9 for a more than pleasant surprise.  She’s backed by some top notch musicians including Musical Director/Pianist James Sampliner, Danny Weller on Bass, Dan Berkery on Drums.  Arrangements by Christopher Lloyd Bratten.