Ruth Carlin: A Light in the Window – Songs by Judy Collins 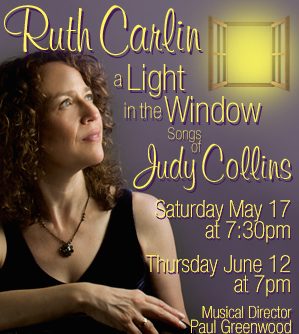 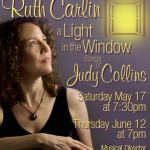 In November 2012, I reviewed and raved about Ruth Carlin’s last major cabaret show “Song/Moments” based upon her CD “Moon Song.” Carlin is an extraordinary actress-singer and each new show is an event. Her latest, “A Light in the Window – Songs by Judy Collins” (Laurie Beechman Theatre, June 12th), is an amazing and astonishing tribute to the woman who began as a folk singer in the Sixties and has crossed over into every musical field in her journey, most recently appearing at the White House and the Metropolitan Museum.

If I have to search for a word to describe Carlin’s very distinctive act, I would call it an art song cycle. Again, Carlin has surrounded herself with the best musicians in the business: Paul Greenwood is her musical director and arranger, Dick Sarpola who plays in the pit of “Alladdin” is her bass player, and John Redsecker is on drums. The act is flawlessly paced by Carlin, Greenwood, and her director, Scott Barnes.

The first song is Joni Mitchell’s “Chelsea Morning.” Carlin appears on stage in a classy stunning long dress which is tiered to her bodice with black lace on the bodice and on the long sleeves. She stands stage center and sings the words with dramatic meaning. She follows it immediately with “Maid of Constant Sorrow,” the traditional folk song that, when Collins heard it on the radio as a child, motivated her to go out and buy a guitar.

Carlin begins to tell us the background of each selection of Collins that she has chosen. We get “Since You Asked” melded with Carlin’s own “Ghosts of Love,” Leonard Cohen’s tender “Suzanne,” and Collin’s own “Secret Gardens.” The series of ballads are broken by a rocking country western styled “Pack Up Your Sorrows,” Richard Farina’s signature song which the band rocked on.

It is followed by songs by two songwriters named Stephen. Although several singers had recorded the song from “A Little Night Music,“ Judy Collins recorded “Send In The Clowns” and her recording was the first Stephen Sondheim song to make the top of the Billboard charts. It is paired with Stephen Sills “So Begins the Task” and Greenwood’s arrangements perfectly complemented Carlin’s rueful performance.

Carlin states Collins was introduced to Duke Ellington’s music when her blind disc jockey father played “I Don’t Know About You” on his radio show. Carlin lightly swings this standard and she is smart enough on this song, as well as all the others, to include the seldom sung verses.

Another theatre song that Collins recorded and Carlin delivers with a stunning performance is “Pirate Jenny.” Carlin’s acting and singing brought bravos from the audience.

The title of the show is from Judy Collins’ bleak song with hope at the end, “The Blizzard.” It’s a striking rarity and Carlin’s interpretation was a revelation of despair and hope.

Of course, the penultimate number was “Clouds: Both Sides Now” by Joni Mitchell . Mitchell was an unknown when Collins recorded it. Carlin sang it tenderly and meaningfully, making you think you had never heard all those great lyrics ever before.

The last song? John Lennon and Paul McCartney’s “In My Life” sung simply and effectively.

At one point in her patter, Carlin discussed Collins’ universal taste in music and called her not a folk singer, not a pop singer, not a rock singer but a “Universal Singer.” Ruth Carlin certainly demonstrated that. Watch for future dates and I do hope this show will be recorded. It is unquestionably one of the best cabaret shows of the year.