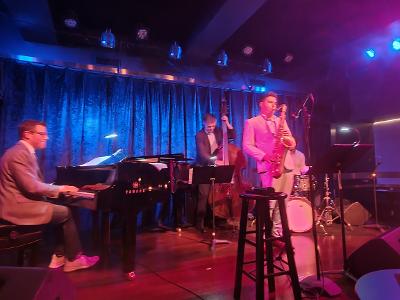 The Sam Dillon Quartet took the stage at the Birdland Theater for a seven-song, 90-minute one-night stand. In what was Sam’s first time back to Birdland since the pandemic, Monday’s lineup had Steven Feifke on piano, Peter Slavov on bass, and Charles Goold on drums.  Sam, a saxophonist with movie-star good looks, smartly attired in a pale gray suit and a sky-blue shirt with no tie, came out swinging with “Secret Love” (Sammy Fain/Paul Francis Lester).  The quartet traded solos and moved through multiple rhythmic shifts.

Sam told the sizable crowd that one thing he learned during the pandemic was how much he loved jazz standards.  While they did perform several songs from the Great American Songbook, half the show was devoted to the compositions or covers by jazz icon John Coltrane, whom Sam credits as “the only reason I’m standing in front of you today.”  On Coltrane’s “Giant Steps,” drummer Charles Goold’s giant steps were like those of a very athletic tap dancer.  Sam’s playing was at times fast and furious, with impressive runs of 16th and 32nd notes.  His long, breathy sax solo to introduce Ellington’s “In A Sentimental Mood” reached breakneck speed before slowing to a sultry pace for the rest of the song.  The band’s take on “Love Thy Neighbor” (Mack Gordon/Harry Revel), influenced by Coltrane’s cover, had great interplay, with the musicians clearly enjoying themselves.

It is sometimes as much fun to spot musical quotes (short, recognizable phrases from unrelated songs) in jazz as it is to “find the Ninas” in a Hirschfeld etching.  The earnest and preppy Steven Feifke, a young and accomplished musician and orchestra leader, who leads his own band, made great use of many clever quotes, including “Salt Peanuts,” “I’ve Got Rhythm” and “Ain’t Misbehavin’.”

Feifke showed off his considerable chops for the quartet’s penultimate piece, the Miles Davis composition “Blue in Green,” from his seminal 1959 “Kind of Blue” album.  Here, Feifke played a lengthy and beautiful piece of unrelated music, alone, before Goold kicked off the song in a bossa nova tempo quite different than the moody Davis arrangement.

Throughout, Peter Slavov powered through his bass solos with a melodic and muscular ferocity matched by the innovative drumming of Charles Goold (who’s father is the legendary saxophonist Ned Goold), together driving the uptempo portions of the program.

It was a good night for instrumental jazz at Birdland.