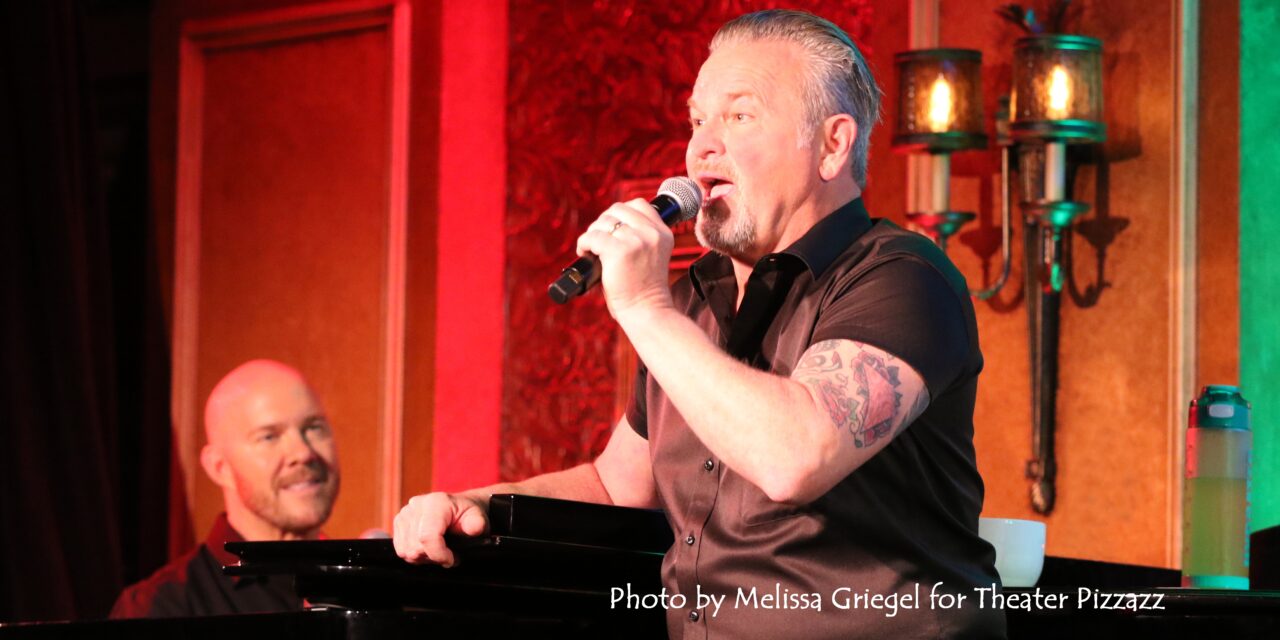 For the first time in my career as a reviewer, I can start off my review with “I laughed; I cried.” I laughed so hard that, at times, I felt like I was at stand-up comedy show, not a musical cabaret. And I cried so deeply, I had tears streaming down my face and had to reach for my pocket tissues. Such was the emotional roller coaster that was Sam Harris’s March 17th show “Openly Gray!” at Feinstein’s/54 Below. Sam Harris burst onto the screen at age 22 as the Grand Champion singer of the premiere season of “Star Search” in 1983-1984. He then went on to be a multi-million selling record artist with nine studio records, a Tony-Nominated actor appearing in The Life, The Producers, Grease, and other Broadway shows, and in 2014, an author of a collection of autobiographical essays and stories entitled Ham – Slices of a Life.

Harris started off quietly singing “Happy Days are Here Again” a Capella and slowly built up the song as music director Todd Schroeder added in piano and the song rose to a crescendo. This was followed by a funky, jazzy version of “Crazy,” ending with a dramatic blackout on stage. “I am SO happy to be here; you have no idea,” Harris told us. “Last time I was here it was 2019, moments before the apocalypse. It’s only fitting to be in the same space.” He then launched into one of the funniest COVID/pandemic rants I have ever heard; and I have heard a lot. While he touched on familiar topics (gaining weight, hoarding toilet paper, making bread, and spending way too much time with loved ones), he did it in such a relatable and humorous way, the entire room was filled with uproarious laughter and nods of agreement.

He asked the patrons if there were any Gershwin fans in the room. After a round of approving applause, he laughed and said, “That’s nice. Well, I am not going to sing Gershwin. I am going to sing Sondheim!” This got even more applause, as he began “You Could Drive a Person Crazy” from Company, with some additional lyrics he added to the song. For this piece, he sat at the piano and accompanied himself, as the stage lights dimmed and spotlighted Harris at the keys. Schroeder returned to the piano to play the soft notes for “Jesse,” which Harris sang slowly and full of emotion to a silent room with attentive ears. A master of great timing, Harris knew it was time to lift the show up and add in some comic relief with the absolutely hysterical “Making Love Alone”.

Harris opened up very honestly about his struggles with stage fright, losing joy, and injuring his vocal cords. His deeply emotional stories are also peppered with immensely funny bits, showing off his talent as a raconteur. The most personal and moving story he told, was one that made me openly weep – a story from his childhood about his friend Charlie. His friend was a gifted photographer and a great friend that struggled with family issues and, unbeknownst to Harris, depression. The story he told about 16-year-old Charlie’s last day on earth was as beautiful as it was sad and moved everyone to quietly listen to his musical tribute to his friend.

The loud, fun, enthusiastic moments of the show included “Proud Mary,” made famous by Tina Turner, “Use What You Got” from The Life, and “Don’t Rain on My Parade” from Funny Girl, a show about to open as a revival on Broadway. Schroeder sang along to “Proud Mary” as Harris twirled and danced on the stage. His rendition of the Beatles song “Help” received a standing ovation. He ended the show on a perfect note, with the song that won him the “Star Search” title and launched his career: his unique and stylized version of “Over the Rainbow.” Throughout the evening, Harris showed us, over and over again, what makes him a star. His story-telling, comedic timing, personality and, of course, his singing, makes him the perfect fit for a cabaret show.