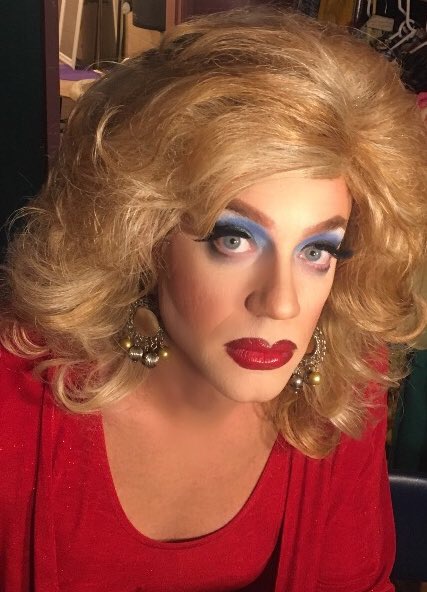 When you first step into the Laurie Beechman Theatre, and spy the grand piano positioned stage left, atop which sits a martini and glass of water, while ’70s easy listening standards play over the loudspeaker, you think you know what you’re in for. After all, you did pay for a ticket to see Sam Pancake, acclaimed comic actor, known for pop-up appearances on Friends, Cougar Town, and King of Queens, and “meatier” recurring roles on Gilmore Girls, Will & Grace, and Arrested Development.

But the moment the lights dim and he makes his first entrance, you find it’s, in fact, not Sam Pancake at all, but rather, the actor masquerading as one of three different drag personalities at a clip, each one gaudier than the last. Essentially, what appears at first to be your average park-and-bark cabaret is actually a cute-and-kitschy romp, complete with a healthy heaping of lipstick, wig changes, and crude humor galore, with a host that colors way outside the lines — no matter the character of which he’s portraying.

To further add to the wackiness that ensues, the eponymous evening is subtitled “Hot, Sweet, and Sticky,” presumably referencing the personified personalities of these respective “queens.” And while that’s indeed not quite a proven fact, with just a glimpse at each of the three characters, you’ll soon see why such an assumption isn’t too far-fetched.

Again, the evening screams campy ridiculousness from start to finish… and at times, the formula works better than others. The first of our characters, Helluva Bottom Carter (yes, and that’s just the beginning), is hosting the Southern State Sassy Sweethearts of Drag pageant, and reads off a slew of (faux) competition finalists — Miss Carriage, Crystal Mess and Blanche DuBoys (not DuBois, “cause she do boys!”) among them — while giving a detailed overview of the pageant’s history and mourning its founder Tallulah Stankhead.

The second, Peggy Wooten-Heifen-Smythe, seasoned Grand Dame of the British theatre (think Dame Edna meets Mrs. Doubtfire), brings us to an actual cabaret setting, mid-Smythe’s famed act, which she concludes with her off-kilter rendition of a Noel Coward oldie-but-goodie, complete with a cockamamie trot around the microphone that is neither explained nor seemingly thought-through. Here, too, she’s joined by musical director Steven Wishnoff, in character as kooky nephew Pipsy, and his unnecessary slugging across the stage — a move, while funny to some, ends up seriously slowing the pace of the scene, and adding to the confusion.

The third persona, octogenarian Fritzie Zimmer — a male, yes, but every bit exaggeratedly flamboyant — in the final moments of his, Zimmer’s, one-man show, “What’s Left of Me,” while undoubtedly the most outlandish of the three (think jokes about bedpans and Prep H; hence: “sticky”) actually has its merits, if only because it allows Pancake to showcase his natural (and impeccable!) tap abilities, without the mask of any of his characters. That is, in his tap, he’s not buried behind the accents of his quirky cast of characters nor is he intentionally mucking up the routine for comic effect (see his delivery on the aforementioned Noel Coward song, or Wishnoff’s mindless clunking on the piano)… it’s just pure, raw, show-biz goodness. Sure, it’s in character and peppered with a few crass, cringeworthy zingers, but it’s still much more of Pancake as Pancake than we’ve seen up to this point and, by that token, it’s a welcome, refreshing change. (The song he’s tappin’ to ain’t bad, either) Bummer that it’s coupled with Wishnoff, who returns, this time as ex-husband #7/current roommate, Giacomo, to begrudgingly drag himself (and the pace of the scene) across the stage.

On that note, interspersed among the vivacious live acts are a variety of pre-taped viral videos, featuring Pancake (as Pancake) and his friends, which, while amusing and popular in viewership as standalone entertainment, are seemingly out of place within the context of the show; jammed in just for the hell of it… victimized as a pawn in the overstuffed menagerie of nonsensical hijinks the evening encompasses.

The show, therefore, to say the least, is a mixed bag. Pancake deserves praise for where he gets it right: on one hand, minus the puzzling middle, the choice of song — albeit, lip-synched entirely in presentation — was inspiring. In the first act, Carter gives us “I’m Here,” from The Color Purple in light of all the goings-on in our government, and despite the over-exaggerated facial tics and arm movements, you could tell the message was clear and true — emphasizing the need for us all to stand tall and proud despite our differences AND celebrate those differences within one another. Now is the time. Similarly, Zimmer’s final hurrah (with the aforementioned tap routine, to boot), declares that while life is short, we can make the most of it by living it to the fullest — another incredibly significant notion to consider amid this tumultuous political climate. And, to his credit, there are a few ROFL quips here and there: as Carter, he says he understands the Jewish religion from playing Motel Kamzoil in a youth production of Fiddler; as Peggy, basking in the spotlight, he deadpans, “I wish it were hotter up here!”

But overall, it’s quite messy and jumbled, greatly suffering from a thinly veiled throughline and forced jokes that don’t land — a move not aided in the least by the pair’s awkward attempt to stifle their uncontrollable laughter upon seeing each other in their respective get-up. In short, a valiant effort (and perhaps a night’s perfect entertainment for the right crowd), but for this writer, Pancake needed a little less sugar and syrup, and a little more time on the griddle.

Sam Pancake: Hot, Sweet and Sticky played the Laurie Beechman Theatre (under the West Bank Café, at 407 W. 42nd Street) on May 19th and 20th. For more information on tickets for future shows, visit www.westbankcafe.com/laurie-beechman-theatre.