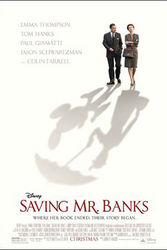 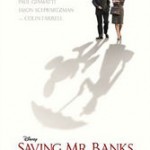 I went into Disney’s Saving Mr. Banks, a dramatized account of production meetings leading to the creation of one of their most beloved films, Mary Poppins, expecting to hate it. As someone who is fascinated by the life of PL Travers, the bisexual, hypochondriac mystic who wrote the Mary Poppins books, I knew that this new film would amount to nothing more than character assassination in service to the messianic legacy of the anti-Semitic and misogynist Walt Disney. I was not disappointed. It’s a terrible film, for sure, though I was surprised at how downright campy it was. Kelly Marcel’s blatantly false script, John Lee Hancock’s schmaltzy direction, and career-worst performances from Emma Thompson and Tom Hanks provided for a kamikaze of a film designed to squeeze tears from the most willing of participants while skeptics smack their heads. An hour in, I stopped pulling my hair and started smiling at every manipulative move from the creative team.

Emma Thompson should be ashamed of herself for playing PL Travers as a mildly complex but mostly priggish woman who annoys every man with whom she comes into contact. There is no show of skill in this stock performance, though a crying scene that closes the film is so comically awful that she won me over. Tom Hanks deserves most of the credit for my enjoyment. His performance is consistently terrible as he settles into a monotonous Disney-esque speech pattern that makes Mr. Rogers seem like a coke-fiend in comparison. Hanks is getting steadily worse and watching him trudge along on the goodwill he built up in the 80s is often a filthy joy.

If there’s justice in the world, Kelly Marcel will never again write the definitive account of anyone’s major life moments for the screen, though given her striking inability to tell a story with dramatic weight, I can’t help but be excited for her future screenwriting endeavors. She recently completed the screenplay for the film adaptation of mommy porn 50 Shades of Grey. The book is the kind of source material that is already so trashy and shapeless that her ludicrous construction of it could make for highly entertaining film going. If only she hadn’t gotten that lucrative assignment by having PL Travers roll in her grave.