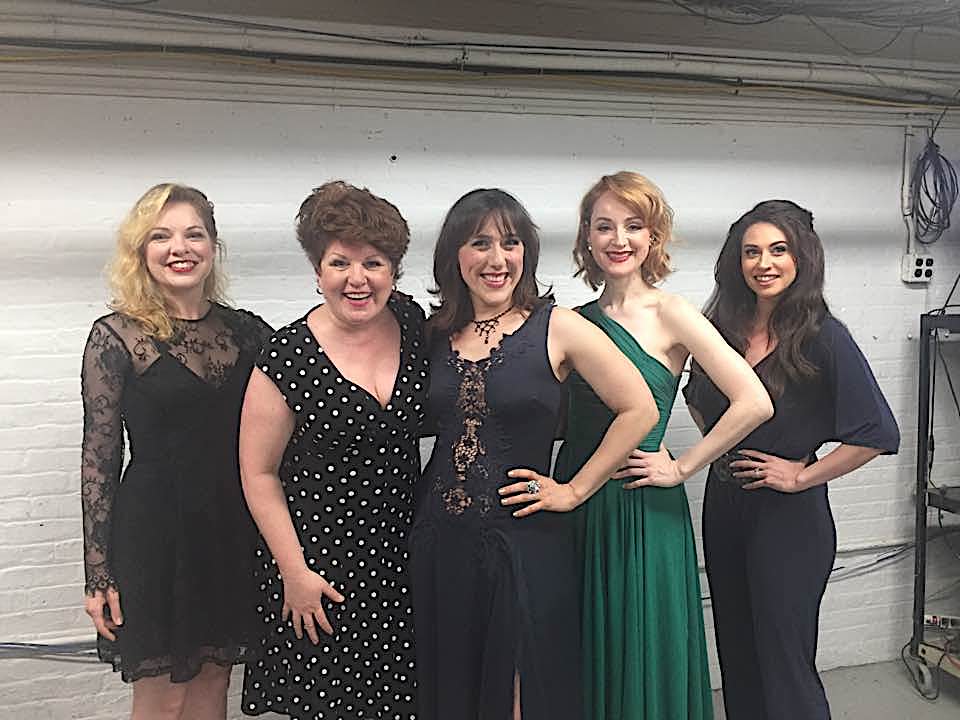 Those of us who remember going to a Broadway musical back in the good old days know that singers like John Raitt and Patricia Morison performed without amplification.  Their pure voices reached the back of the house.  Scott Siegel’s annual Broadway Unplugged show on The Town Hall stage is a reminder of those times.  For the 15th year, today’s singers, many who never sang unamplified in a theater-sized hall, were challenged to sing out loud and clear, no electronic enhancement.  Accompanied by pianist Ross Patterson’s Little Big Band with Randy Landau on bass and Mairi Dorman-Peneuf on cello, they accepted the challenge.

Show biz doesn’t have the indomitable pipes of  Ethel Merman anymore, but we do have Klea Blackhurst, who has her own brass and sass, selling the Annie Get Your Gun favorite, “You Can’t Get a Man With a Gun.”  Maxine Linehan, actress and singer, was authoritative with Evita‘s anthem, “Don’t Cry For Me Argentina” as she looked out at the people at her feet.

Siegel’s taste in choosing the songs for this program is impressive.  We went back to the long-ago genre of operetta as Douglas Ladnier sang a sumptuous “One Alone” from The Desert Song.  Also from the world of operetta, Brian Charles Rooney delivered a passionate ballad from The New Moon, “Lover, Come Back to Me.” Ben Davis was celestial with Javert’s determined vow, “Stars”  from Les Misérables.  Davis also joined Erin Davie in one of the most romantic ballads, “All the Things You Are” (Very Warm for May).  Farah Alvin, who sang a heartfelt “Maybe This Time” from Cabaret, returned to close Act I in a fierce duet with Rooney with “You’ve Lost That Lovin’ Feelin'”  from Beautiful as well as the Billboard pop charts.  Another impassioned pop hit, this one originally from Italy, was a knock-out by Jillian Louis, “I (Who Have Nothing)” included in Smokey Joe’s Cafe.  Louis later joined with Lanier for another landmark duet “If I Loved You,” this one from Carousel. Lovely songs from other Broadway plays include a nuanced “Where I Want to Be” from Chess, sung by Jeremy Kushnier and The Secret Garden’s “Come to My Garden” tenderly sung by Jill Paice.  Close to the end of the show, Judy McLane left her Mamma Mia! Greek island for Showboat‘s “Can’t Help Lovin’ that Man.”  Kyle Scatliffe ambled on stage with a big voice to sing “Big News” from Parade and Emily Skinner morphed Mama Rose for Gypsy‘s “Some People.” Bill Daugherty, who has been featured in every Unplugged show, showed us why he is such a favorite with his dual renditions of “Mad About the Boy” (introduced in Words and Music). The first version referred to women (and Noel Coward) swooning over Douglas Fairbanks on the screen.  A later version stated more campy references. With energy and humor, Max Von Essen reprised his show-stopper in American in Paris, “I’ll Build a Stairway to Paradise.”  To close this show, the Broadway by the Year Chorus lined up to deliver “What I Did For Love” from A Chorus Line.