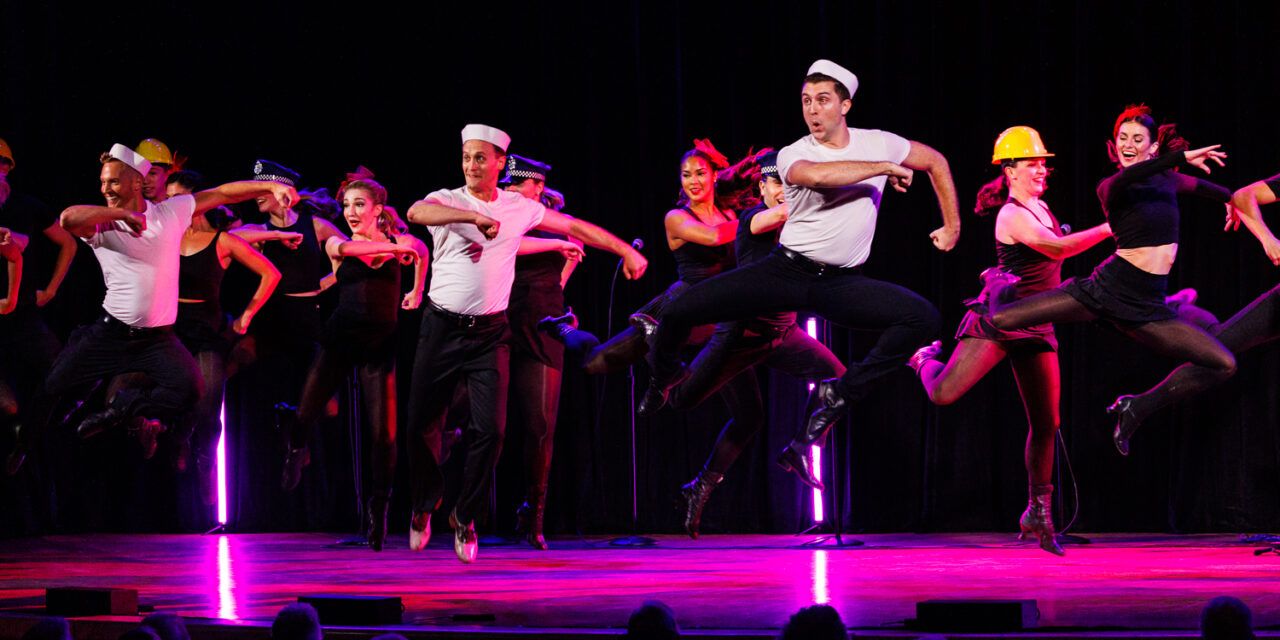 At Town Hall on September 19, 2022, Scott Siegel’s renowned series, Broadway By The Year, closed its 21st season with a “One Night Only History of Broadway Song & Dance.” It is remarkable that Scott who creates, writes, directs, and hosts these shows celebrating Broadway, has managed to keep these evenings fresh, is able to come up with new ideas and themes, and books exceptional and exciting talent. The evening was performed without intermission and that kept the energy going. Ross Paterson has been the Musical Director from the start, and for this evening, Don Falzone on bass and Eric Halvorson on drums played at the very first BBTY.

The show opened with “New York, New York” from On The Town (Comden & Green) as Danny Gardner, Zach Frank, Chris McNiff came out in sailor hats recreating the great number from that show along with the BBTY Dance Troupe. All the incredible dance numbers were choreographed by the brilliant Danny Gardner who dazzled us with his talent and performances, especially his solo of “Give My Regards to Broadway” from George M. Cohan’s Little Jonny Jones. Scott considered Cohan the “father of the American musical” as he wrote, produced, and appeared in more than three dozen Broadway shows. This concert highlighted the contributions of great performers and choreographers such as Fred and Adele Astaire, Agnes DeMille, Jerome Robbins, Bob Fosse, Michael Bennett, Tommy Tune, Susan Stroman, Andy Blankenbuehler, Sergio Trujillo, Jerry Mitchill and others.

Kendrick Jones, a renowned and amazing tap dancer, performed “Dr. Jazz” (Jelly’s Last Jam) along with giving a  “master class” from “Where’s the Beat?” (Bring in ‘da Noise, Bring in ‘da Funk) displaying the different styles and steps of great tappers from the past. Another fabulous dancer is Luke Hawkins who dazzled with his performance of  “I Can Do That” (A Chorus Line), and then when Jeannette Bayardelle sang “Dancing Queen” (Abba) from (Priscilla, Queen of the Desert), he performed a terrific and fun dance number to her song. Then Jeannette came out in a sexy white dress, in a tribute to Whitney Houston, and wowed the audience with “I Wanna Dance With Somebody.”

The beautiful Kelli Barrett sang a lovely rendition of “I Could Have Danced All Night” (My Fair Lady) and her husband Jarrod Spector sang “Can’t Take My Eyes Off Of You (Jersey Boys) with the BBTY Dance Troupe. Together they dueted on a romantic “The Best Things Happen While You’re Dancing” (Irving Berlin’s White Christmas) with Danny and LaTarika Pierce dancing to their song. A last minute surprise was Jillian Louis singing a moving version of “The Music That Makes Me Dance” from Funny Girl.

Many of the group numbers were simply thrilling as when Rema Webb sang “Bye Bye Blackbird” with the BBTY Dance Troupe performing a marvelous Fosse routine behind her, capturing his unique style and moves. In an evening of highlights, another one was “The Room Where It Happened” from Hamilton that was wonderfully choreographed by Danny Gardner with Adan Gallegos as Burr, Luana Psaros as Hamilton, Pedro Coppeti as Jefferson, Matthew Carter as Madison with the BBTY Dance Troupe and BBTY Chorus providing musical support. Adan was terrific as Burr, and oddly enough, is working as an usher at the show but hopefully he will  one day join the cast.  The closing number tied the whole production together as Danny led the huge cast in “I Got Rhythm” (Anything Goes) and the audience could not help but sing along and applaud wildly for this impressive evening of song, dance, and magnificent talent.

Broadway By The Year Chorus

Broadway By The Year Dance Troupe