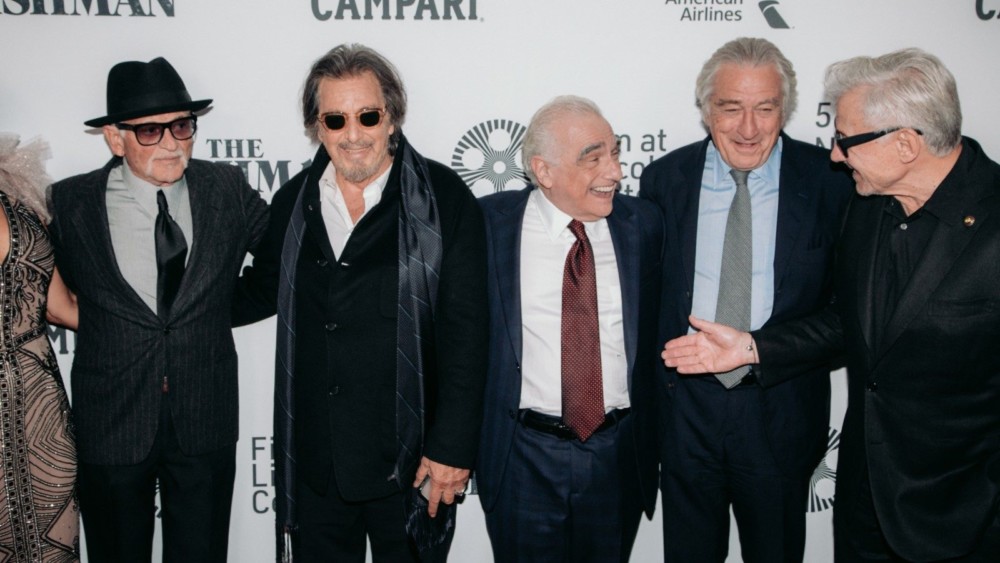 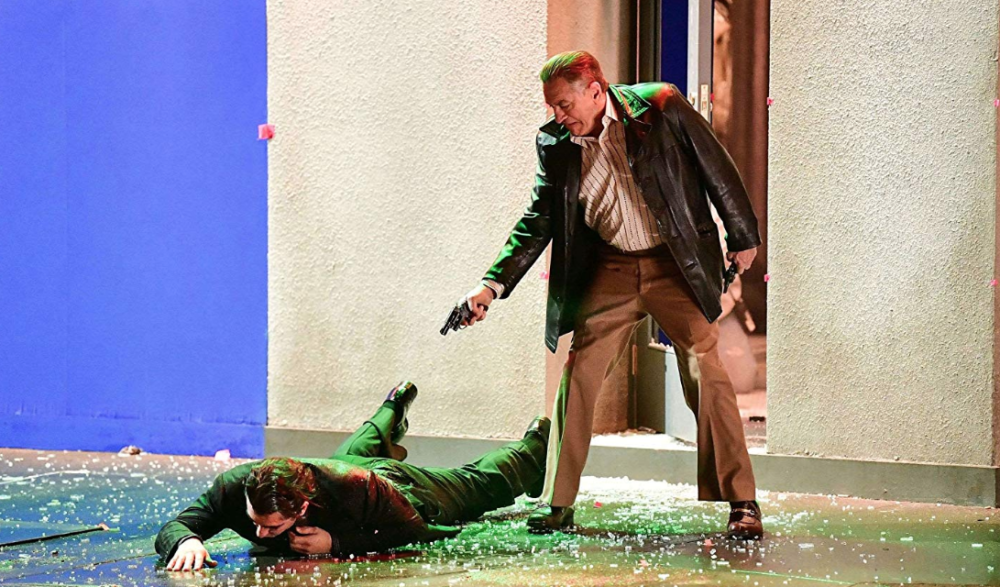 MORE BANG FOR YOUR BUCK: Streets seem much meaner today than they were back in 1973 when Martin Scorsese, Harvey Keitel and Robert De Niro follow Mean Streets right into their first New York Film Festival. The trio’s latest, which just opened the 57 New York Film Festival—not with a bang, but with a sustained symphony of bangs—spans 50 years of a prolific killing career and amasses an incredible body-count. The camera will occasionally stop-motion over a capo cameo, and we get a forecast of the poor guy’s violent demise: “Shot in the face twice,” “Killed on his front porch,” etc. One lucky goodfella was “Well liked by all” and “Died of natural causes at age 80.” . . . This gangland cavalcade is right down Scorsese’s dark alley. Through sheer repetition, he practically owns the crime genre (Goodfellas, Casino, Gangs of New York and his lamer, but Oscar-winning, The Departed), and he could be capping himself here in telling the true story of Frank Sheeran, who learned to kill Italians in World War II and put that to use in peacetime as a labor union official and exterminator. Two of his highest-profile hits have already been movies: Crazy Joe Gallo (Peter Boyle) and Hoffa (Jack Nicholson). . . . To play on such a sprawling canvas, De Niro and Joe Pesci, both 76, and Al Pacino, 79, availed themselves of a digital de-aging device, the same that reduced Brad Pitt’s Benjamin Button to a glint in his father’s eye. (The work done on advancing their age, it has to be said, is far more effective.). . . . In 2007, Scorsese suddenly realized he hadn’t worked with De Niro or Pesci since 1995’s Casino, so he started shopping around for a likely project. Initially, that was to be The Winter of Frankie Machine, a thriller novel by Don Winslow about a retired San Diego mafia hitman named Frank Machianno (and nicknamed after the heroin addict Frank Sinatra played in The Man With the Golden Arm). If the subject was Retired Hitman, De Niro suggested instead the book he was reading—the Sheeran biography by Charles Brandt. “I could see he was very strongly attached to the character,” Scorsese said at the press conference following the screening. “We didn’t have to say much.” (Good thing: the real Sheeran was 6’4” and 300 pounds.) . . . “I Heard You Paint Houses,” the first words Jimmy Hoffa ever spoke to his friend and eventual assassin, Sheeran, was the book’s title, and De Niro wanted it to be the movie title as well. It’s mob-speak for committing murder (i.e., the “paint” is blood splattered all over the walls and floors of a mob hit). Certainly, it’s a better, tangier title that what the movie producers came up with. The Irishman is about as Irish as the Festival of San Gennaro. In point of fact, there are no Irish actors in this film. . . . Pesci contributed zip to the press conference, but darn if he doesn’t steal the picture, shelving his tics and tricks to play a senior-statesman of mobsters, Russell Bufalion, who brought Sheeran into the crime-family fold and tried to keep the impossibly volatile Hoffa in line. He may just wind up with a companion piece for his Goodfellas Oscar. The irony is that Pesci officially and emphatically retired with Love Ranch in 2010, and it took multiple offers (some say 50) to coax him back in front to the cameras. . . . His competition for Best Supporting Actor could come from Pacino, who starts late in the film but makes his bombastic presence known. “The train had already left the station, so I hopped on,” he said. “If you go into a film that is in motion, you could feel like an outsider, but I didn’t. I didn’t at all. . . . I don’t know if I could have done it without these people because they made me comfortable.”. . . At three and a half hours, The Irishman is the longest mainstream film released in more than 20 years. Its rough cut is said to have exceeded four hours. At 108 days, it was Scorsese’s longest shoot. There were 117 locations and 309 scenes, which meant sometimes there were two or three moves a day. . . . Paramount lost confidence in the film when it went beyond its $100 million budget, and Netflix stepped up with enough funds to finish the film—a compromise for Scorsese, who’s vehemently opposed to watching feature films on a TV screen. It will be released to select theaters on Nov. 1 before premiering Nov. 27 on Netflix. . . . Some have said the cost of the picture spiraled upward to somewhere between $175 million and $209 million. Remember when $20 million seemed excessive for Heaven’s Gate? Quaint. 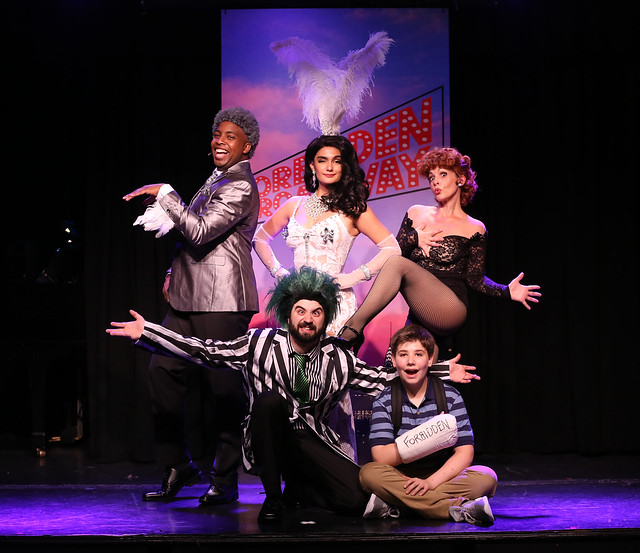 BOILING AND BUBBLING: He’s baaack’s—“Peck’s Bad Boy of Broadway,” Gerard Alessandrini—and you can imagine, after an interminable intermission of five years, how that fevered brain behind Forbidden Broadway is positively Vesuvius at this point, ready to erupt into a brand-new edition of show spoofs. There may even be a little telltale lava outside The Triad on West 72nd where he’s currently previewing for an Oct. 16 opening—and where all these madcap capers began 37 years ago. . . . He’s calling this new installment (No. 27, for those who keep score) Forbidden Broadway: The Next Generation “because so many shows on Broadway include young actors or teenagers and appeal to family audiences. There are good things about that and bad things about that, but many funny things about that.” Just for instance, there’s one sketch that questions why they keep casting Evan Hanson younger and younger. . . . He may have taken off five years, but he took notes. “It has almost more than we can actually handle. We’re not repeating any numbers. It’s all new.” Among his shiny new targets are Moulin Rouge’s Karen Olivio, Beetlejuice’s Alex Brightman, Tootsie’s Santino Fontana, the begowned Billy Porter. Occasionally, he’ll stray outrageously onto straight-play turf and mess with it (The Ferryman and What the Constitution Means to Me). . . . For structure, Andre de Shields undulates liquid-like through the proceedings as the guide through the Hades of Forbidden Broadway Underground. Kelli O’Hara swoops by in her massive Miss Anna hoopskirt, asserting she’s the Queen of the Revivals and intends to stay so. Alessandrini takes a deep dive into the dark Oklahoma! but admits privately he’s fond of the show (“I really liked what they mined from  it. I think it was all there in the script.”). For the Jewish Fiddler, he claims he’s “been boning up on my Yiddish to do justice to it.” (Italian irony, perhaps.) . . . The musical mischief isn’t just confided to the borders of Broadway: One sketch takes after the Emmy-winning Fosse/Verdon where Bob Fosse and Gwen Verdon compete for top billing to the tunes of “Whatever Lola Wants” and “Two Lost Souls.” Emily Blunt’s Mary Poppins makes a landing on the Triad stage at one point, does a bit about movie musicals and then blithely seques into Broadway ones. That film’s song, “The Place Where the Lost Things Go,” is turned into “The Place Where the Lost Shows Go,” and off we go, leap-frogging willy-nilly through a history of the flop shows on Broadway.  For this skit, Alessandrini even sacrifices his record covers from ‘60s-vintage flop shows. “That was fun to do. You’ll see some old album covers that nobody has ever seen.” . . . Clearly, he’s been researching this show a long time. . . . For accomplices, he’s handpicked some first-class farceurs (Immannuel Houston, Chris Collins-Pisano, Aline Mayagoitia, Jenny Lee Stern and Joshua Turchin), and the piano is manned (as it has been from the beginning through Spamilton) by Fred Barton. 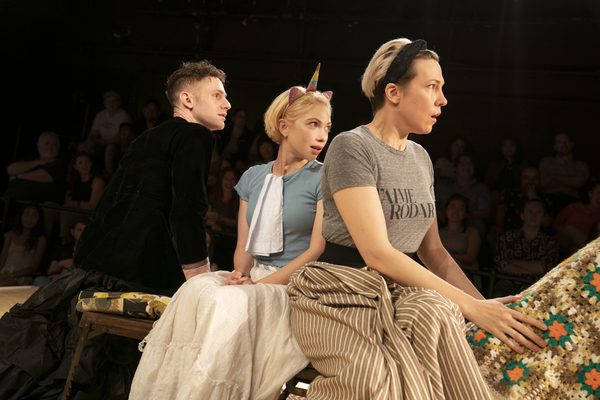 TOO BAD, WE CAN’T GO BACK TO MOSCOW: ‘Tis the season when we’ll have three—three—three—Three Sisters wishing and whining and wailing for a change of address. . . . MCC got this ball rolling with some midsummer madness from Halley Feiffer called Moscow Moscow Moscow Moscow Moscow Moscow, broadly broadsiding Chekhov’s tragic comedy about a loudly discontent, dysfunctional Russian clan of 1901. Chris Perfetti, whose range reaches from The Tempest’s Ariel to the Picnic paperboy, donned a black gown and flounced about as a gender-bent sister, the willful Masha. . . . Brazilian director Christian Jatahy will phrase the play as a question Oct. 23-27 at BAM—What if they went to Moscow?—and will answer it in two different mediums, film and theater. Audiences will file into the BAM Fisher and the BAM Rose Cinema to see the same performance and then, at intermission, switch places to finish the job. . . . New York Theater Workshop will conclude its 2019-2020 season with its own Three Sisters, starring the real-life Lady Bird, writer-director Greta Gerwig, and a former Hamlet and Romeo, Oscar Issacs. It seems to be the traditional version, save for the fact it’s directed by a hot-shot young director who likes to affix his own personal, often disfiguring mark on the classics: the Lear-tarnished Sam Gold. . . . Gerwig’s hubby–Noah Baumbach, also a writer-director of note—will be spilling his Marriage Story at the New York Film Festival in its prestigious Centerpiece selection slot this Friday. The picture picked up a Golden Lion nomination for Best Film in August  at the Venice Film Festival and won more praise last month at Toronto’s. Look for it to put Netflix back in the Oscar race, along with the film’s two leads. The plot—about a director (Adam Driver) and an actress (Scarlett Johansson) in the throes of a grueling, coast-to-coast divorce—just came to Baumbach following his divorce from actress Jennifer Jason Leigh. Imitation of life? . . . Perfetti’s best bud, Micah Stock, who swept into theaters in a couple of Terrence McNally plays (And Away We Go and It’s Only a Play, earning a Tony nomination and a Theater World Award for the latter)—is making great headway in films as well. He’s one of several fresh-and-funny young unknowns who shine exactly like stars in Sundance’s breakout hit, Brittany Runs a Marathon. Playwright Paul Downs Colaizzo turned first-time screenwriter-director to tell this smart, heart-swelling story of what a friend of his went through to regain her health, attractiveness and self-esteem. He even spaced filming so title player Jillian Bell could show the 40 pounds she shed doing the New York Marathon. 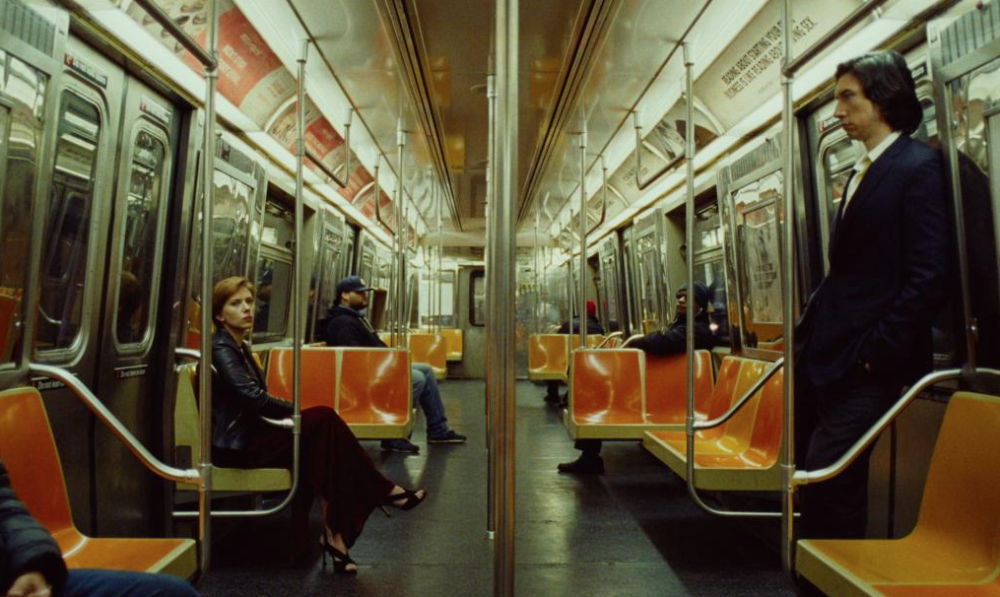 Scarlett Johannson, Adam Driver – Can this marriage be saved 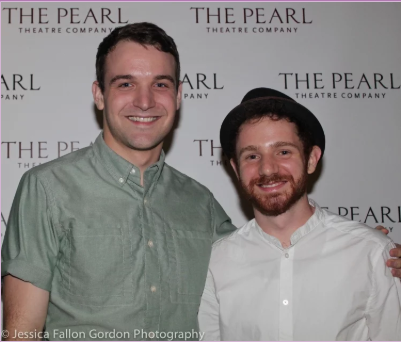