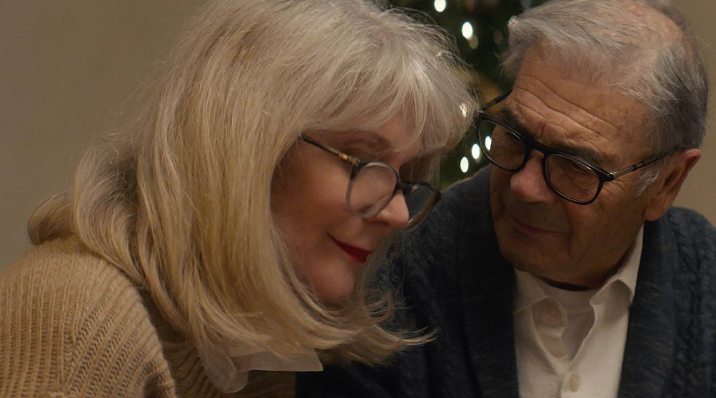 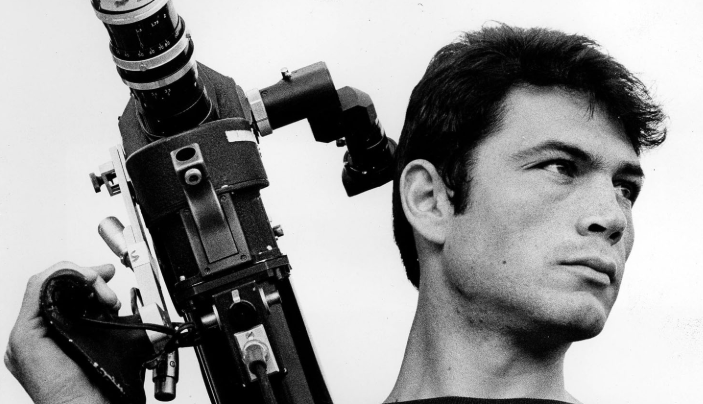 Blythe Danner and Robert Forster in What They Had: someone to watch over her 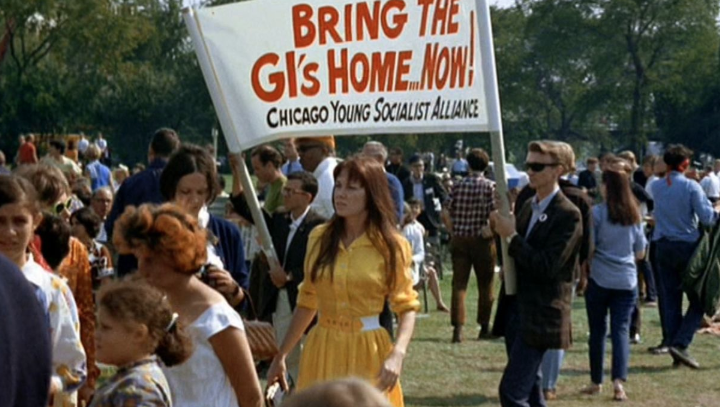 CAN’T SEE FORSTER FOR THE TREES: He arrived in movies on a horse bareback—bare everything, in fact–an object of festering obsession for Marlon Brando in John Huston’s 1967 Reflections in a Golden Eye, and he should have been a major player in the Hollywood firmament, but, when Robert Forster died last month of brain cancer at the age of 78, that brass ring had eluded him. For more than five decades, he swaggered through 200 film and TV credits with unassailable maleness but utterly untouched by any kind of transformative Stardom. Mostly, his was crushed by the movies themselves, an avalanche of mediocrity—indeed, one of them was actually called Avalanche. . . . He got the acting bug in his hometown of Rochester, and landing the lead in a community-theater West Side Story inflamed him enough to try his luck in New York where, right off, he was cast opposite Arlene Francis in a two-character play that went to Broadway, Mrs. Dally Has a Lover. Characteristic of things to come, it provided no career momentum so he boomeranged back to Rochester to be a substitute teacher and construction worker. A Fox talent scout found him there and pointed him toward Hollywood. The only time he ever returned to Broadway was to replace James Farentino in Brando’s arrival role, Stanley Kowalski in A Streetcar Named Desire. . . . After a downward spiral of 27 years on screen, a Supporting Actor Oscar nomination suddenly popped up and spared him the abyss. He earned it the hard way—in a blaxploitation flick called Jackie Brown as Max Cherry, protector and bail bondsman for title player Pam Grier. The role was a gift from Quentin Tarantino, a fan of the mediocrity Forster often found himself mired in. The actor auditioned for Tarantino’s Reservoir Dogs but didn’t pass the Q.T. test. Eventually, he did for Jackie Brown–after a seven-hour audition. . . . The definitive Robert Forster performance, of course, was the TV cameraman caught up in the violence of the 1968 Democratic National Convention in Chicago in Haskell Wexler’s classic indie, Medium Cool. On Saturday, Nov. 23, at 2:30 p.m., at Metrograph (7 Ludlow), The Motion Picture Academy is hosting a 50th anniversary screening of that film, dedicated to Forster. John Sayles, an ace indie director himself (Return of the Secaucus 7, Matewan), will do the introductory notes. . . . If given a good role and half a chance, Forster could deliver a wonderful, award-worthy performance, like the testy, short-fused grandpa who pops a smart-aleck teenager in the face in Alexander Payne’s 2011 The Descendants, or the hard-nosed head-of-the-house coping with wife Blythe Danner’s Alzheimer’s and the conflicting solutions of their children (Hilary Swank and Michael Shannon) in Elizabeth Chomko’s 2018’s What They Had. . . . Early in his career, he had a few fast flings at TV series (Banyon, Nakia) that went nowhere—except, at one point, to a 21-month-long unemployment line—but, as he matured, he guest-shot on series with more accuracy and authority. His best was an enigma named Ed on Breaking Bad; they also called him The Disappearer because he could create new identities for people on the run, like the character Bryan Cranston played. . . . These two first crossed paths 40 years earlier—Forster as the star, Cranston as a special-effects assistant on Sayles’ Alligator. “A lovely man and a consummate actor,” Cranston said at Forster’s passing. “I never forgot how kind and generous he was to a young kid just starting out in Hollywood.” . . . Forster reprised The Disappearer in El Camino: A Breaking Bad Movie, which was released on Netflix and in select theaters the day after his death. . . . Robert Forster (1941-2019) seems destined to go down as The Star Who Got Away. . . . Verna Bloom, Medium Cool’s leading lady, made her film debut here, risking life and limb milling among the melee of the DNC with Forster and the camera-wheeling Wexler. “Look out, Haskell, it’s real!”–a line actually dubbed in after the shooting–was what writer-director Wexler was thinking as he photographed the bloody chaos, so he included it. Bloom was cast after her vivid, high-voltage work replacing Glenda Jackson on Broadway as Marat/Sade’s assassin, Charlotte Corday. The film career that followed, though shorter, had more high spots than Forster’s, ranging from the randy dean’s wife in National Lampoon’s Animal House to Mary, mother of Jesus, in The Last Temptation of Christ, her tenth and final feature film.   Until her death last January from complications of dementia, she was the wife of Jay Cocks, the Time critic who turned Oscar-nominated scripter for Martin Scorsese movies (The Age of Innocence and Gangs of New York). 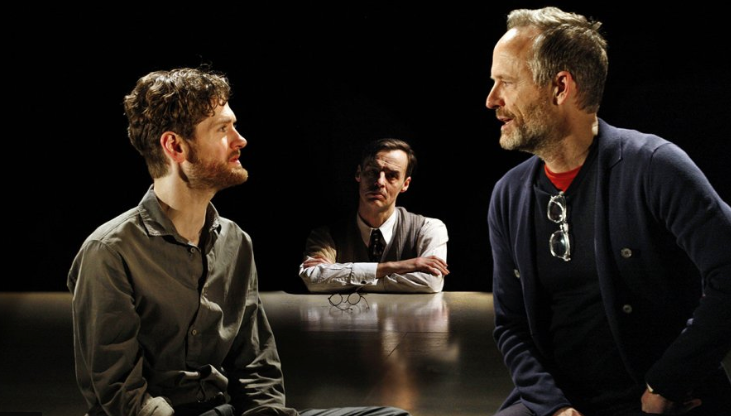 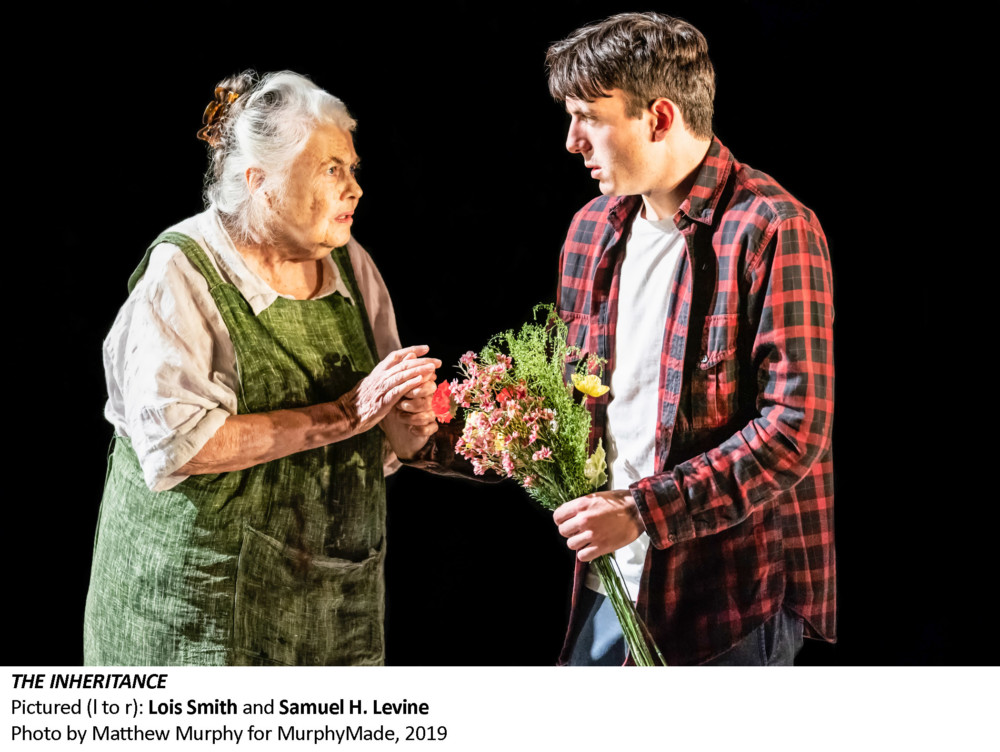 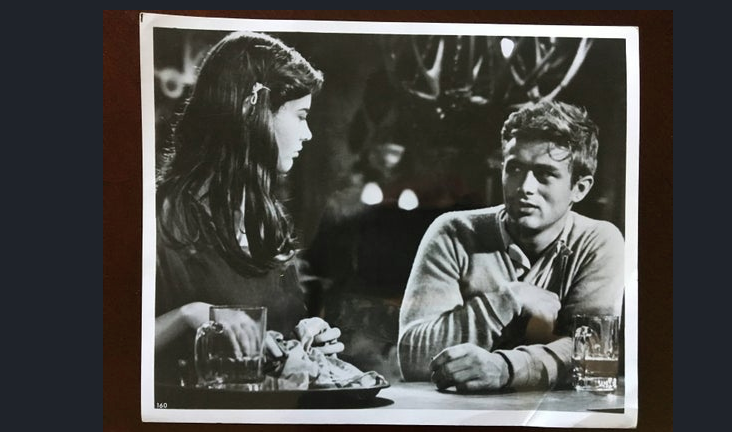 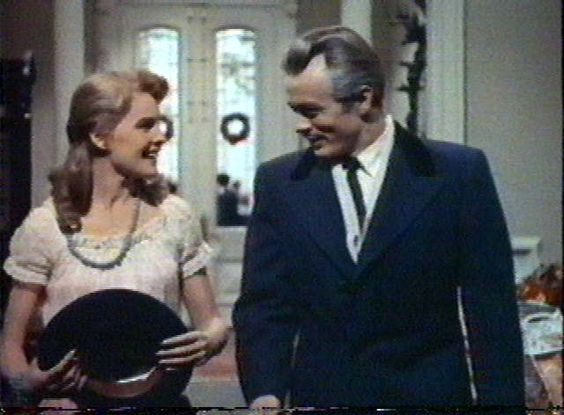 Carroll Baker and James Dean in Giant – faking a May-September 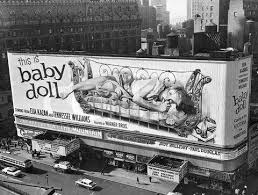 The block-long Baby Doll: our lust is here to stay

ANOTHER FORSTER HEARD FROM: The Inheritance, opening Sunday at the Ethel Barrymore after an Olivier Award-winning world-premiere in London, is Matthew Lopez’s thought-filled attempt to portray contemporary gay life (2015-2018) through the prism of E.M. Forster’s masterpiece, Howards End. This takes six acts and seven hours. . . . You could practically fill out a whole Tony category from the performances here. It’s a young man’s game, and director Stephen Daldry raided Yale and Juilliard for the prerequisite ten he took to London. Three in particular (Andrew Burnap, Samuel H. Levine and Olivier Award-winner Kyle Soller) pull the massive narrative along with surprising swiftness—but it’s the seniors-on-the-sidelines who bring a real emotional fullness to The Inheritance. First and foremost, the heart and soul of the piece are centrally located in the performance(s) of the lone Brit in the cast, Paul Hilton, Broadway-bowing at 49. By simply adjusting his eyewear and his accent, he completely owns two roles simultaneously–the polite but precise Forster, offering up his Howards End as a template to house a modern story, and an American alcoholic named Walter, the unloved lover of a wealthy, Trumpian Republican. That role is sturdily asserted by John Benjamin Hickey, 56, with vocal vigor and force. And finally, arriving late in the sixth and final act is a woman’s presence, provided by the astonishing Lois Smith, playing the mother of an AIDS victim. Howards End star Vanessa Redgrave, who originated the role in London, passed on reprising it here, contending that it was too much of a bear to take on twice; Smith battles it beautifully. . . . The superb Merchant Ivory film of ’92 is recommended viewing prior to attending this play. It’s not essential, but the parallels are there. The trick is to try and snag a copy. A few from The Criterion Collection can be found on Amazon at premium prices; if you can wait, The 25th Anniversary 4K Restoration that’s available now in Europe and Australia is due in the U.S. as a Blu-Ray release in 2020. . . . The last time Howards End played a New York movie theater was a few years back when Film Forum arranged an evening with its director James Ivory. He subsequently went on to become the oldest winner of a competitive Academy Award ever (89 in 2018 when he was citied for his screen adaptation of Call Me by Your Name). . . . Lois Smith, who turned 89 herself this month, is one of two living actresses who played substantial movie scenes with James Dean. She was the whorehouse waif who helped him slip into the office of his mother/madam, Jo Van Fleet, in East of Eden. The other actress with this Dean distinction is Carroll Baker, who, as the misguided offspring of Rock Hudson and Elizabeth Taylor in Giant, thought she was in love with the much-older Dean. (They were actually the same age, but he had phony streaks of zinc oxide in his hair.) . . . These days, Baker is 88 and the author of mystery novels. Who Killed Big Al? is her latest, and she’ll be autographing it in the Film Forum lobby Dec. 11 after the 7:20 screening of Baby Doll and a subsequent interrogation by film historian Foster Hirsch. “Possibly the dirtiest American-made motion picture that has been legally exhibited” was Time magazine’s ruling on Baby Doll. The film got a C-rating—Condemned!–from the Catholic Legion of Decency and was banned by many movie houses during its 1956 release. Studio infidels countered this with a block-long Times Square ad showing Baker as a thumb-sucking child bride in a crib. The role of Baby Doll made her a star and earned Baker her one and only Oscar nomination. Interestingly, when it was last done as a play—Tennessee Williams’ 27 Wagons Full of Cotton—the part got Meryl Streep her one and only Tony nomination. 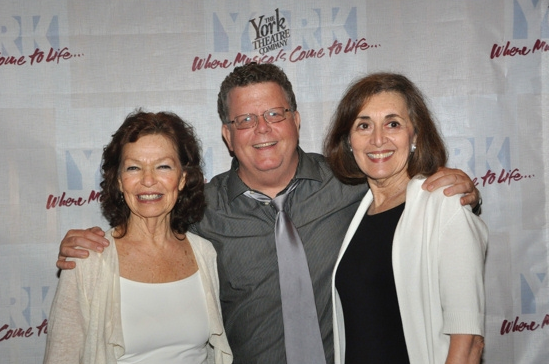 Gretchen Cryer, James Morgan, Nancy Ford – still getting it together 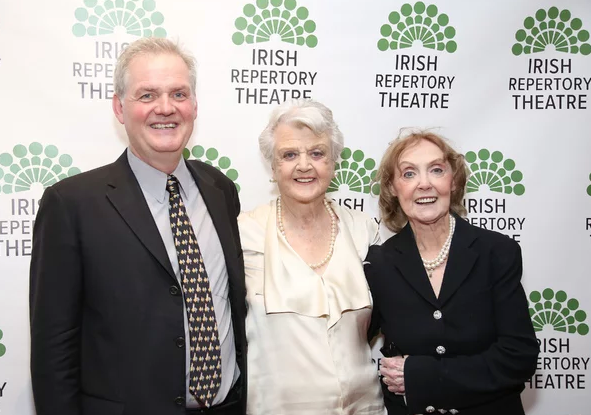 MORE MONDAY MADNESS: Like last Monday, this Monday bulges with benefits. The biggest original cast reunion campaigning for your entertainment dollar is still Charles Busch’s The Tale of the Allergist’s Wife at the Samuel J. Friedman. Michele Lee, Tony Roberts and Anil Kumar will be back in their old roles, but Linda Lavin will be playing her own mother—a part originated by the late Shirl Bernheim—and has left her title role to the playwright. All to benefit The Actors Fund. . . . A smaller cast reunion will come together at 7 at York Theater when Gretchen Cryer (book and lyrics) and Nancy Ford (music) brush up a 40-year-old act they now call I’m Still Getting My Act Together and Taking It on the Road. Giving ‘em a hand, for one night only, are Britt Swanson Cryer, John Hillner, David Ippolito, Jillian Louis, Dan Paccione and Jennifer Leigh Warren. . . . Even The Paley Center is getting into these Monday Night Fights. MSNBC’s Morning Joe Scarborough will host “And in the End”: The Beatles Fifty Years Later. His panel of experts: Peter Brown, manager of The Beatles in 1969; Rob Sheffield, author of Dreaming the Beatles: The Love Story of One Band and the Whole World, and Max Weinberg, drummer for Bruce Springsteen. . . . Two theater companies will do readings of potential attractions: At the Vineyard at 3, the Abingdon Theater Company will present Rebound, a comedy about competitive actors, written by (and performed by) Dan Halt and David Logan Rankin–while at the Lortel, at 7:30, the Red Bull Theater will kick off its regular Revelation Readings with James Shirley’s big hit of 1630, The Traitor. . . . For unabashed elegance, how do you top Angela Lansbury leading a stylish cast (Hamish Linklater, Lily Rabe, Simon Jones, Jayne Houdyshell, Daniel Davis, Annaleigh Ashford, John Glover, among others) through Oscar Wilde’s The Importance of Being Earnest? The Roundabout benefit will take place at its American Airlines Theater at 7:30. . . . The 94-year-old Lansbury easily filled Lincoln Center’s Bruno Walter Auditorium Wednesday when she was quizzed about her career by Irish Repertory Theater’s Artistic Director, Charlotte Moore, for a Women’s Project taping. “She was funny and fast and told me I could ask her about anything,” reported her interviewer. . . . On Tuesday, Moore and her Producing Director, Ciaran O’Reilly, fly to Ireland to pick up a little bauble from Michael D. Higgins, the President of Ireland. “Every year he gives prizes to people of Irish extraction for excellence outside of Ireland,” she explained. “Ciaran and I are being honored for our 30 years of running Irish Rep. The award is given Wednesday, and I’ll be back the next day because I’m directing our next show at Irish Rep, London Assurance, but Ciaran has a huge family left over there so he’ll linger a while.” . . . Stephen Sondheim, nearing 90, also came in for an international tribute—a honorary fellowship from the Royal Academy of Dramatic Arts. RADA Director Edward Kemp laid it on so thick in his presentation Sondheim wanted to have the speech framed. “In our training at RADA,” Kemp said, the composer “is most often compared to Shakespeare and to Mozart.” A disbelieving Sondheim had to ask: “Favorably?”