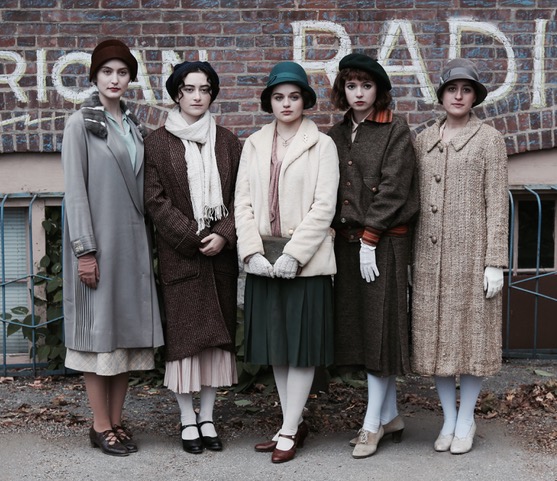 Rosamund Pike and Sam Riley in Radioactive: The Curies at work

ALL AGLOW AGAIN: Radium Girls is the title of not one but two fact-based dramas about female factory workers at United States Radium plants in the decade after World War I. Told the paint was harmless, they contracted radiation poisoning from painting glow-in-the-dark watch dials with self-luminous paint, ingesting deadly amounts of radium to make a fine point on their brushes with their lips. Yes, they sued–and some of them actually lived to see that great day in 1939 when the Supreme Court ruled in their favor, assuring safe workplaces for generations who followed. These women have been lionized in poems, tunes, fiction and non-fiction books, animated films, short stories, punk-rock songs, Young Adult novels—and now Radium Girls is showing up in an Off-Off-Broadway house and as movie fare. Both are in coronavirus limbo right now, but they should be the first out of the hopper, when and if. . . . The Obie-winning Metropolitan Playhouse will be presenting the New York premiere of D.W. Gregory’s Radium Girls 20 years after its initial launching at the Playwrights Theater of New Jersey. Holly Gould as Grace Fryer, the Orange, N.J. firebrand leading the charge, and Kelly Dean Cooper as Arthur Roeder, the US Radium CEO standing his ground, co-star. Laura Livingston referees/directs. . . . The cinematic Radium Girls, which lifted off at the 2018 Tribeca Film Festival and only now has been acquired for theatrical distribution, marks the double directorial debuts of two producers—Emmy winner Lydia Dean Pilcher and Ginny Mohler, who concocted (with Brittany Shaw) an original screenplay out of cold hard facts. Here, John Bedford Lloyd’s CEO Roeder is sandbagged by a pair of determined sisters (Joey King and Abby Quinn). A lovely assortment of stage names has been tapped to lend support: Cara Seymour, Joe Grifasi, Veanne Cox, Neal Huff, Susan Heyward, Greg Hildreth, Steven Hauck, Adam LeFevre, Tom Galantich and Scott Shepherd. 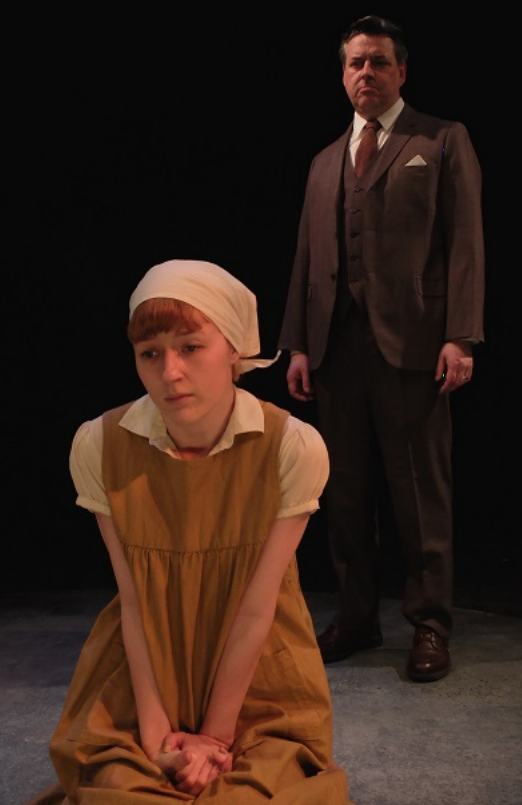 HOT SPOT: Radioactive, which Jack Thorne (known on Broadway for his King Kong–Harry Potter romps) screen-scripted from Lauren Redniss’s graphic novel, qualifies as a kind of origin story for Radium Girls, occurring a couple of decades before when a Polish scientist, Marie Sklodowska, and her husband, Pierre Curie, proved the existence of “radioactivity” (her word) by discovering radium and polonium. This laid the foundation for atomic energy. Rosamund Pike, the former Gone Girl, and Sam Riley play these pioneering scientists who, dabbling in dangers they know nothing about, ushered us into this brave new world. The only performances to make a dent in these labors are by Anya Taylor-Joy as their daughter, Irene (herself a Nobel Prize-winner-in-the-making) and Simon Russell Beale, putting up some stuffy, chauvinistic resistance to Marie’s invading the (then) all-male world of science. (Expect a much bigger Beale display if The Lehman Trilogy actually gets to Broadway this year.) . . . Admittedly, there’s a certain Thorne-in-its-side epic quality to this Curie saga, and the writer doesn’t hesitate to flash-forward beyond his story proper to show the extreme good and bad of what the Curies hath wrought. Hiroshima and Chernobyl rate special stops, as does Nevada’s 1961 nuclear-testing. . . . Not mentioned were the 11 nuclear tests done in Utah two years later. Like United States Radium, the Atomic Energy Commission assured one and all the area was safe, so producer Howard Hughes green-lighted John Wayne to go forth and plunder as Genghis Khan. The Conqueror, a.k.a. “RKO’s Radioactive Picture,” even transported tons of turf contaminated by nuclear fallout back to the studio for retakes. Over the next three decades, 91 of the 220 cast-and-crew members came down with a form of cancer. Forty-seven died, including Wayne, his son Michael, Susan Hayward, Agnes Moorehead, John Hoyt and director Dick Powell; on learning he had cancer, Pedro Armendariz committed suicide, and Lee Van Cleef was suffering from throat cancer when he died of a heart attack. Not making the count were hundreds of local Navajos employed as Mongol extras. RKO Radio Pictures also died—from the picture’s crippling box-office bust.

Susan Hayward, Agnes Moorehead, John Wayne  in The Conqueror: Khan with the wind

GIRL GONE: Madame Curie was one of two title roles Metro-Goldwyn-Mayer cooked up for Greta Garbo to keep her on the screen after she announced her premature, self-induced, non-negotiable retirement in 1941 (the other film was The Picture of Dorian Gray, which wound up being played, with a certain anatomical correctness, by Hurd Hatfield). Even when the studio offered Spencer Tracy as a sacrificial co-star, Garbo recoiled at Curie–then M-G-M realized it already had its own screen team going. Madame Curie is the third of eight movies that paired Greer Garson and Walter Pidgeon. It even advertised itself as “MR. and MRS. MINIVER together again.” . . . When these eight went to television, a second tier of devoted admirers emerged and proved quite warming to the two stars after their film fame had faded. Garson once forwarded a fan letter to Pidgeon, adding a little note of her own:

This woman thinks we go together like ham and eggs.

What does she mean? 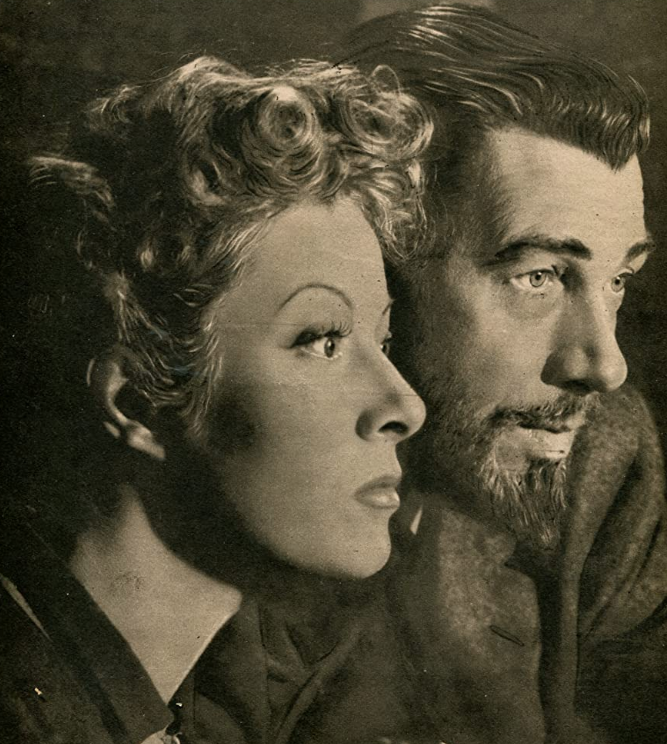 Greer Garson and Walter Pidgeon in Madame Curie: The (early) Curies at work

CLASH OF TITLES: ‘Tis the season of dueling movie marquees: On one are the words Never Rarely Sometimes Always; on the other is something called Sometimes Always Never. . . . Title One refers to the four possible answers of a multiple-choice questionnaire about sexual history. It comes up when a couple of Pennsylvania teenagers (Sidney Flanigan and Talia Ryder) troll New York City for an abortion. Writer-director Eliza Hittman just picked up three festival prizes for negotiating this chaotic narrative. . . . Title Two refers to the three buttons on a jacket—top, middle, bottom—and when each is meant to be buttoned. The film’s leading character knows such things: a retired but still-stylish tailor (Bill Nighy), trying to make amends with one son (Sam Riley) after scaring the other one away with a particularly scrappy game of Scrabble (Is “zo” a legitimate word? Say it isn’t “zo”!) 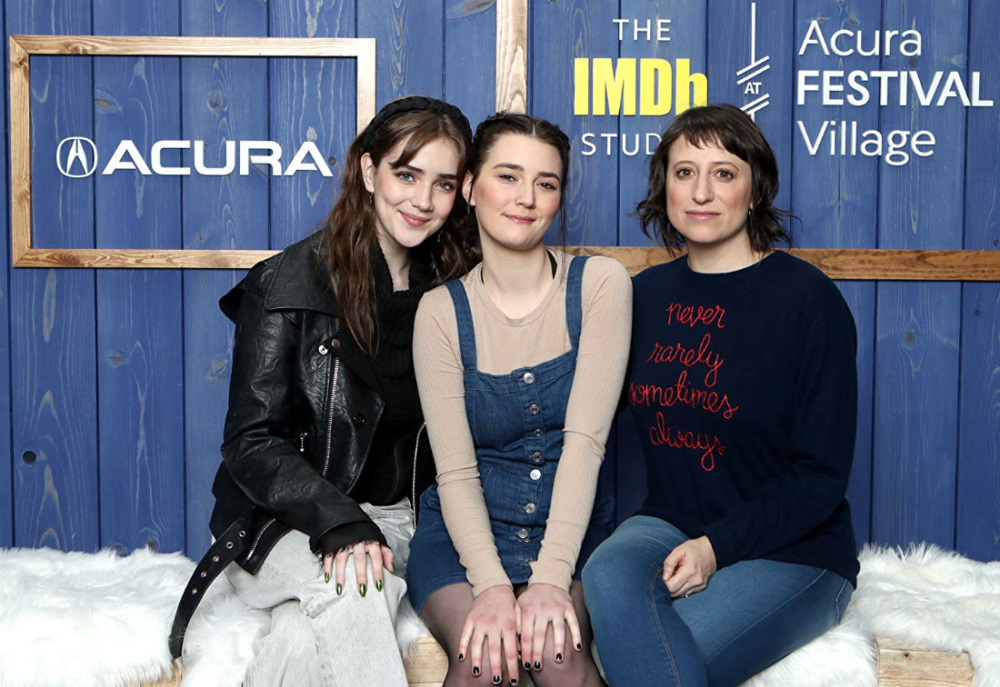 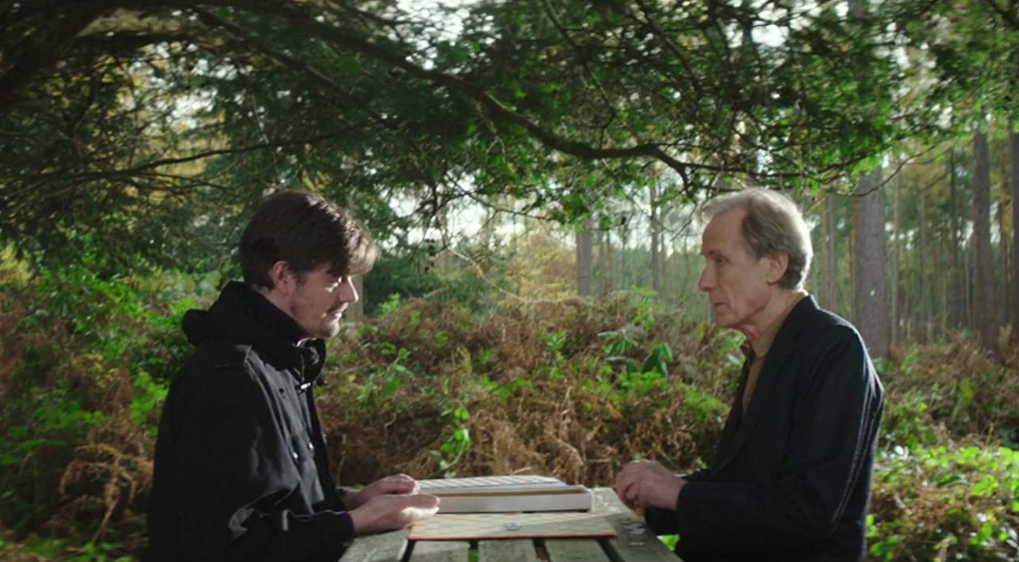 Sam Riley and Bill Nighy in Sometimes Never Always: after a Scrabble squabble

AN ABUNDANCE OF BILLS: Nighy, you may recall, won legions of fans—and a BAFTA Award–scene-stealing his way through Love, Actually as a raunchy old rocker reduced to making a Christmas-themed comeback that he knows is lame and false. Chronically employed, he’s now filling several screens beyond the aforementioned Whadaya-call-it. . . . In Hope Gap, he and Annette Bening tell son Josh O’Connor that they’re cashing in their chips after 33 years of marriage. This actually happened to writer-director William Nicholson, and he wrote a play about it, The Retreat From Moscow (John Lithgow, Eileen Atkins and Ben Chaplin did it on Broadway in 2003). Nicolson thinks of this film version “as a mid-point between Brief Encounter and Who’s Afraid of Virginia Woolf?” . . . Nighy (pronounced Ni-He) pays plenty for his sins against his sons as the lofty lord-of-the-manor and father of Jane Austen’s famously misguided matchmaker, Emma (Anya Taylor-Joy). 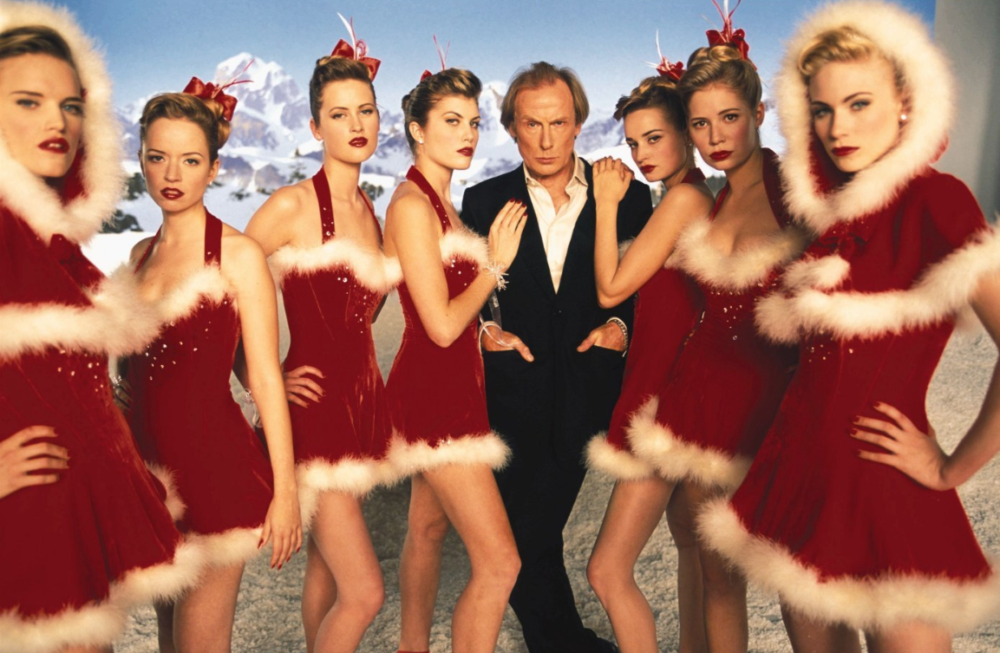 WHAT ELSE IS IN A NAME? There are more Emmas where this one came from. Chicago Shakespeare Theater just wrapped a musical version of Austen’s classic, tuned up by Tony nominee Paul Gordon. The result was generously endorsed by Chicago Tribune’s ace aisleman, Chris Jones–“All romance, all the time!” he decreed–so it could conceivably mosey into our neck of the woods. . . . Which, of course, wouldn’t be NYC’s first brush with a musical Emma. Film director Amy Heckerling reworked her 1995 comedy, Clueless, as a jukebox musical (circa the ‘80s and ‘90s), threw a modern dress over the original 1815 English setting, set it in callow Beverly Hills and got a modest run out of it at the Pershing Square Signature Center in 2018. . . . The other Emma emerging this month comes in printed form: NY1’s Cheryl Wills’ biography of her great-great-great-grandmother, a Civil War widow who raised nine children to read and write (a luxury denied her as a Tennessee slave). 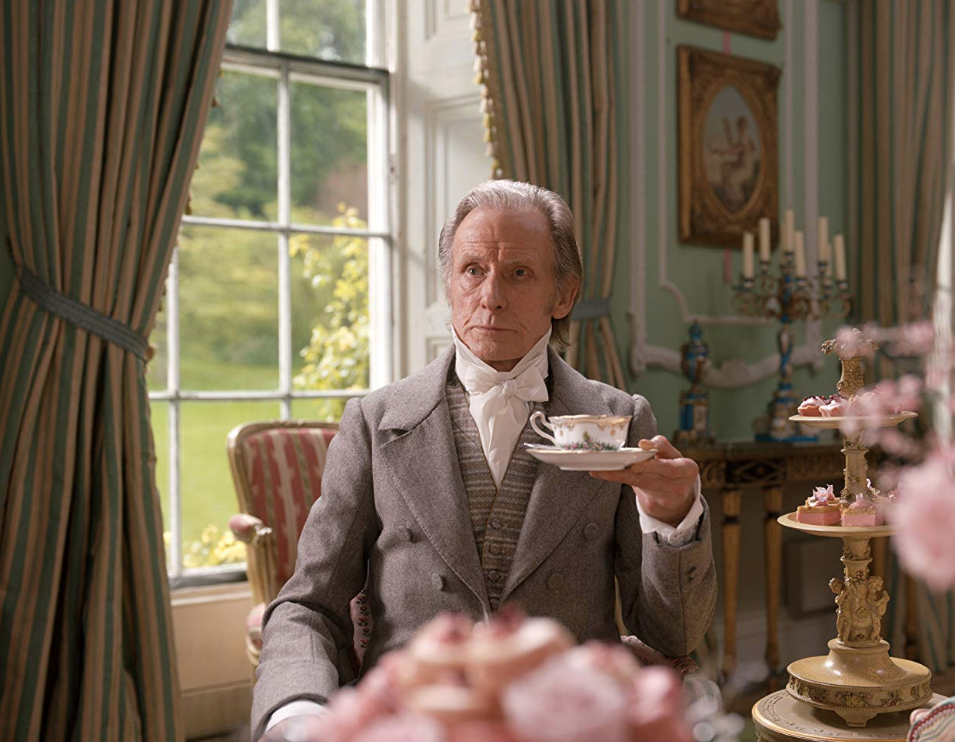 Bill Nighy in Emma: to the manor born

PETE’S PICK: What is Mayor Pete’s favorite musical? Why didn’t this question come up at one of the debates? Too much time was taken up with Medicare-for-All. Fortunately, TheaterMania rushed in where wise men never go to find out what shows were favorites of eight Democratic presidential candidates. Alas, only Mayor Pete Buttigieg responded. Twelfth Night, with its dizzying gender-switching, leads the play pack (“Shakespeare is unmatched”), and Lin-Manuel Miranda’s first Tony winner, In the Heights—due any month now as a blockbuster movie—is his favorite musical (“They did In the Heights in South Bend, and it was incredible”). . . . Predictably perhaps, our current President considers Lin-Manuel’s latest effort, Hamilton, “overrated” (which also happens to be his opinion of Meryl Streep). For some reason, Trump prefers the autocratic party-line of Andrew Lloyd Webber’s Evita.

Lin-Manuel Miranda’s In the Heights (Buttigieg fav) – this summer!