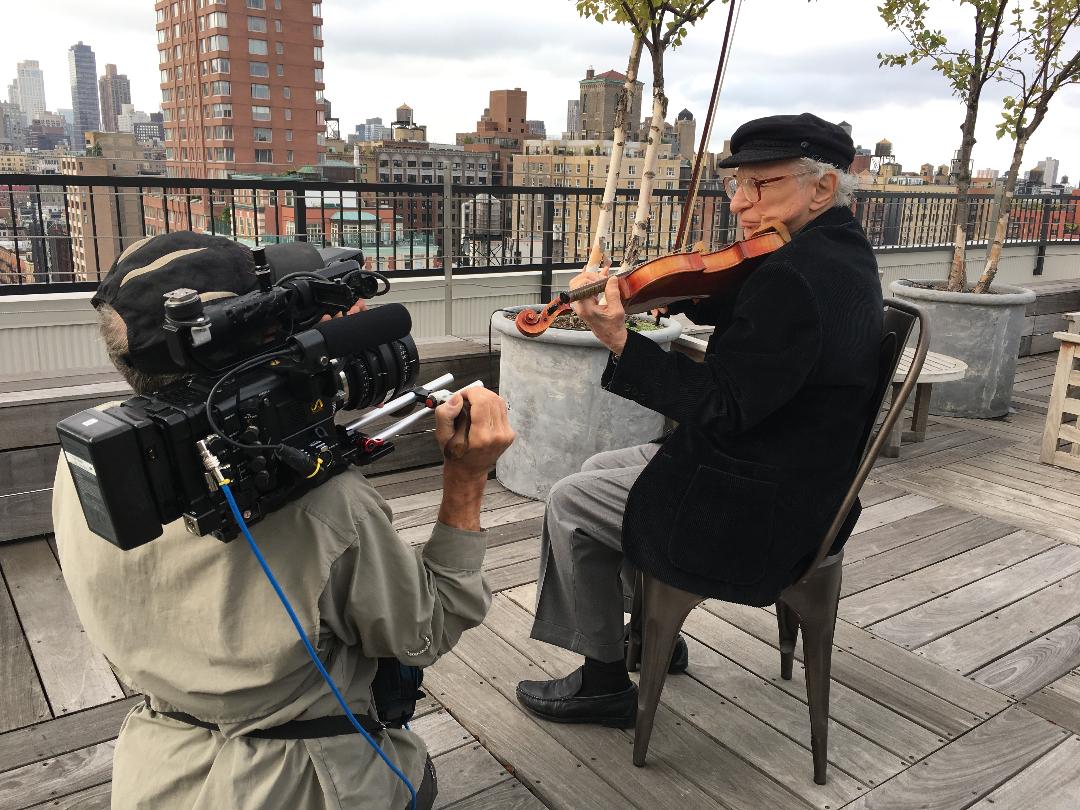 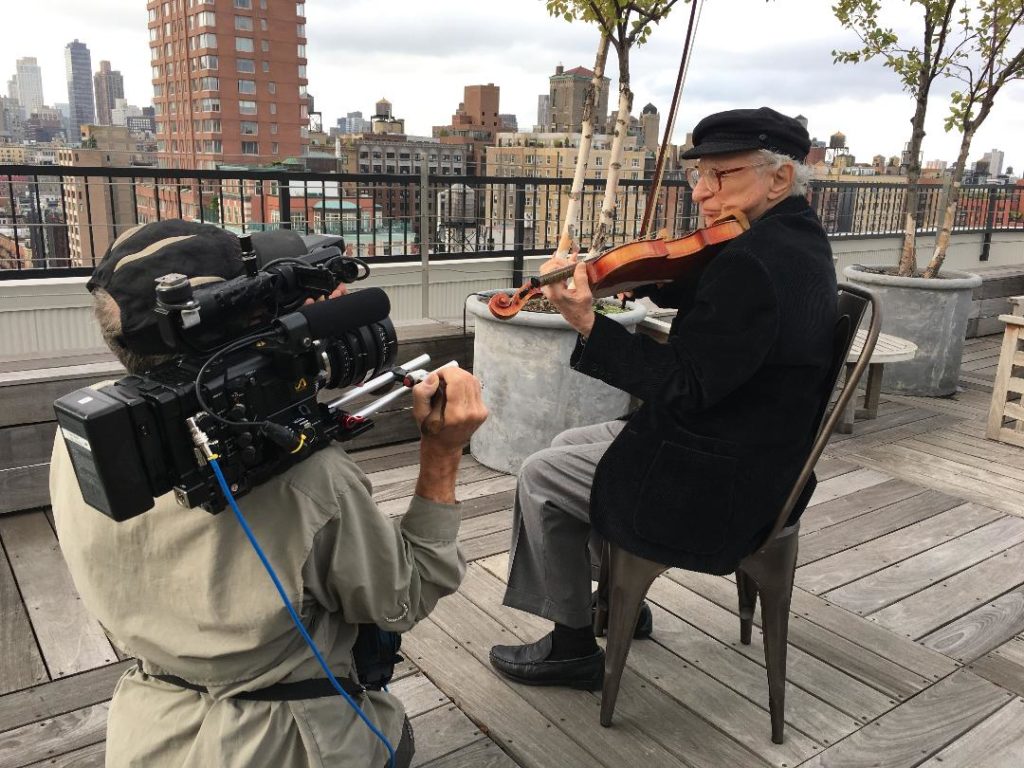 FIDDLE & HARNICK: It’s not generally known, but Sheldon Harnick snuck into show business as a professional violinist, fiddling around with dance bands in his native Chicago. “When I finally decided to make the break and become a lyricist, I just dropped the violin little by little,” he admits. “I haven’t played it for a long time, and I miss it. I’m thinking of starting to practice again.” . . . His official comeback as a member-in-good-standing of the string section occurs at the beginning and end of Fiddler: A Miracle of Miracles, scratching out that infectious lead-in to “Tradition” while sitting, unsurprisingly, atop a Manhattan high-rise. The camera creeps up behind him but saves his mystery for the big reveal at the end. . . . Now 95, he is the only living creative connected with that international juggernaut, Fiddler on the Roof. Whenever the show is revived—as it is currently, in Yiddish, at Off-Broadway’s Stage 42—he unfailingly remembers his collaborators in his remarks: composer Jerry Bock, book writer Joseph Stein, producer Harold Prince, set designer Boris Aronson and, last but never least, director-choreographer Jerome Robbins. Together, they created a magnificent musical that has been performed every day somewhere in the world since Sept. 22, 1964, when it bowed on Broadway. . . . Fiddler: A Miracle of Miracles—perfect title, that explores the show’s almost accidental coming-together and its lasting emotional impact around the world. Valerie Thomas produced and wrote the film with director Max Lewkowicz, and their arduous efforts go on display Aug. 23 at the Landmark and AMC Theaters. . . . The surefire hit song before beginning the tryout tour, Harnick recalls, was something called “When Messiah Comes”—a big favorite at the backers’ auditions. “It was to be an ironic number when the villagers are told they’re going to have to leave. ‘When Messiah comes / He will say to us / ‘I apologize that I took so long / But I had a little trouble finding you / Over here a few / And over there a few / You were hard to reunite / But everything is going to be all right.’” On opening night in Detroit, everything wasn’t all right. The response was deadly. Crickets! So the first question to New Yorkers who came in for the opening was “Why didn’t it work?” Harnick shudders: “They would all look at us like we were out of our minds. They said, ‘Are you crazy? This is a moment of great poignancy, near tragedy. The villagers are told they’ve going to have to leave the place where they’ve lived all their lives, sell their goods and be out in three days. How can the audience accept it? It’s embarrassing. It’s awkward!’ So we cut it.” . . . Ten other songs suffered similar fates, but all were resurrected in 2015 by Harnick for a “Lyrics and Lyricists” program at the 92nd Street Y. . . . Last week these lost songs became available for streaming and downloading via Time Life, along with the numbers from the National Yiddish Theater Folksbiene’s 2018 production. . . . Joel Grey, who helmed the Yiddish Fiddler, drew the black bean (“When Messiah Comes”), and Harnick makes a musically credible case for “A Butcher’s Soul.” Tom Wopat and Sharon Azrieli get double duets, “If I Were a Woman” and “As Much As That,” while two of Topol’s daughters (Rosalind Harris and Neva Small) and one of Danny Burstein’s (Alexandra Silber) team for “To Marry for Love.” After their respective solos, Richard Kind (“What a Life!”) and Tam Mutu (“The Richest Man in Town”) join Hal Linden, Shaina Taub and Matthew Sklar for “Get Thee Out.” The latter two and Grey deliver “Letters From America,” while Austin Pendleton and Joanna Merlin finally get one of their left-overs from their 1964 Broadway production, “Dear Sweet Sewing Machine.” The show’s original opening number, “We’ve Never Missed a Sabbath Yet,” is attacked by Donna McKechnie, Nancy Opel, Alysha Umphress, Mimi Bessette and Lauren Molina. . . . Harnick’s lyrics should lead you to where the songs might go in the show. It took 55 years, but Fiddler on the Roof finally has its first ever musically complete cast recording. 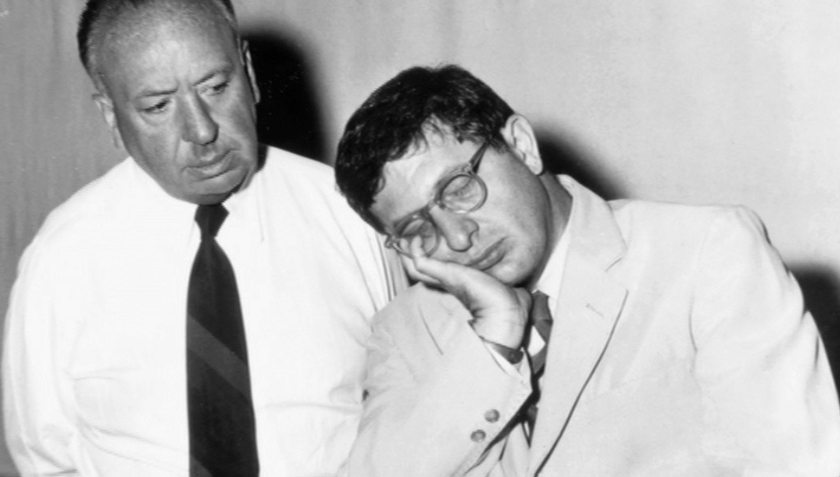 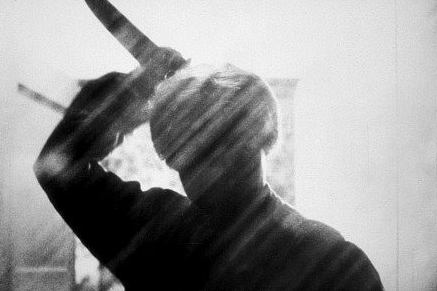 HERRMANN FOR ALL SEASONS: Those shrill “shrieking strings” of Psycho will get a vigorous New York Philharmonic workout, come September–on Friday the 13 and Saturday the 14–when Alfred Hitchcock’s 1960 (now we can say it) masterpiece is unspooled at Geffen Hall. If you have never been to these cinema-cum-symphony clambakes, what the hell’s stopping you? Talk about interactive! . . . This classic score—the work of Bernard Herrmann (born more simply Max Herman in New York City)–and the one he did two years earlier for Hitchcock’s Vertigo rank #4 and #12 on the American Film Institute’s list of The Top 25 Film Scores. . . . But you’ll find neither up for Oscars. Herrmann made that running only five times—twice at the start of his 52-film career (Citizen Kane and The Devil and Daniel Webster in 1941) and, posthumously, twice at the end of it, (Obsession and Taxi Driver in 1976), plus one in the middle for 1946’s Anna and the King of Siam. It seems Herrmann’s hair-trigger temper and contentious personality didn’t win him many, if any, friends in Hollywood. . . . The uncharitable John Simon must have headed up the New York chapter. “I don’t know what Herrmann died of,” he snarked when the last film the composer scored reached the screen, “but I haven’t ruled out shame.” . . . Of course and thank God, contrary opinions exist: Martin Scorsese has said the only reason he wanted to remake Cape Fear was so he could recycle Herrmann’s gripping score. A 16-year-old Stephen Sondheim was so struck by Herrmann’s Hangover Square concerto that he learned to play it by ear. It later inspired him to write Sweeney Todd. . . . Herrmann came to movies via Citizen Kane, having put in a couple of years conducting live performances of Orson Welles’ Mercury Theatre on the Air, including Welles’ historic Halloween prank of 1938, The War of the Worlds. . . . Early episodes of The Twilight Zone ushered him into television, and, when it became apparent he and Hitch were making beautiful mayhem together, he toiled regularly on The Alfred Hitchcock Hour . . . The director even coaxed him on camera once–to conduct his orchestration of the “Storm Clouds” Cantata during the big Royal Albert Hall shoot-out in 1956’s The Man Who Knew Too Much. . . . Herrmann spent his whole career ignoring the wants of his directors and doing it His Way, with one exception: William Dieterle, whose All That Money Can Buy (a.k.a. The Devil and Daniel Webster) resulted in the composer’s only Oscar. Hitchcock was happy to let him do his own thing and indeed was so pleased with Psycho’s score he doubled Herrmann’s contracted fee for it. . . . It was only after eight successful collaborations (North by Northwest, The Birds, Marnie, The Trouble With Harry, et al) that Hitchcock finally spoke up and asked for “a more commercial sound” for Torn Curtain. Herrmann did it His Way, and that tore their curtain. His music was scrapped, replaced by a John Addison score, and Herrmann and Hitchcock never spoke again.

THERE’LL BE SOME CHANGES MADE: Cutie chantoosie KT Sullivan is currently (till Aug 25) leafing through The Noel Coward Songbook with Steve Ross at the Irish Rep in Love, Noel. Then, she’ll swiftly switch partners (Jeff Harnar) and composers (Strouse and Harnick) for a one-night West Banker at Laurie Beechman’s Sept. 10. . . . OK. Agreed: The greatest Scrooge of ’em all is the one Alastair Sim did in 1951. The arguments start with the second one. My favorite is George C. Scott’s deliciously malicious Ebenezer in the 1984 TV movie, A Christmas Carol. Which bodes well for Campbell Scott when he jumps into Daddy’s nightshirt for the Old Vic version of A Christmas Carol coming to the Lyceum Nov. 7-Jan. 5. Directed by Matthew Warchus (Groundhog Day) and adapted by Jack Thorne (Harry Potter and the Curse Child), it will contain all the old Christmas chestnuts (“Joy to the World,” “It Came Upon a Midnight Clear,” “Silent Night,” ad infinitum). 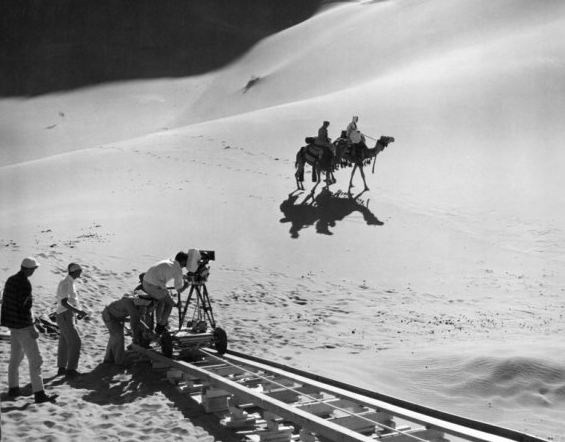 LEANING IN THE RIGHT DIRECTION: A parched mouth is a small price to pay for 220 minutes of loping across hot desert sands again with Lawrence of Arabia. Fathom Events is affording us this opportunity—fleetingly, Sept. 1 and 4–by screening that 1962 classic at select movie houses across the country. . . . Masterfully and meticulously directed by David Lean, it may well be the last glorious gasp of old-guard (pre-CGI) filmmaking. To give you an idea, it’s the movie that inspired Steven Spielberg to become a director. . . . In its initial release, Lawrence ran 222 minutes. Unfortunately, short-sighted exhibitors were slow to see what they had on the screen and, five weeks into release, ordered 20 minutes removed so they could get in an extra showing. (Judy Garland’s A Star Is Born suffered the same plight, prompting Times critic Bosley Crowther to lament “A Star Is Shorn.”) When Lawrence was re-released in 1971, it had shrunk to 187 minutes. . . . By the time film restorer Robert A. Harris entered the picture in 1989, Lawrence’s negative was “at the absolute end of its life.” Time, apparently, is an even crueler disrespecter of celluloid than distributors. Systematically, Harris set out to reassemble the film from what stored or lost footage materialized and, in three cases, from scenes that no longer had soundtracks. . . . Supervising his work was the original director. Lean had steadfastly refused to view the film once the scissors were whipped out, and, when he did see it again, he made a startling discovery. During Lawrence’s long trek across the Sinai Desert to Cairo toward the end of the film’s first half, an entire reel of footage had been flopped when the film was transferred from its original 70mm to 35mm. In the split second of a reel change, Peter O’Toole’s watch jumped from his left hand to his right. Camels had been moving in the wrong direction for 20 years–and nobody noticed! . . . One of the seven Oscars Lawrence of Arabia raked in went to newbie composer Maurice Jarre, whose thunderous and surging score gave the desert its due. If you concentrate, you can still hear it. Among the musical also-rans it trounced was Elmer Bernstein’s emotionally evocative score for To Kill a Mockingbird. It’s still around too, underscoring the TV ad for the play. One would like to think that the Tony nominators didn’t confuse Adam Guettel’s incidental country music, played off to the side of the stage independent of the play’s action, with Bernstein’s exquisite score. Keep that thought.