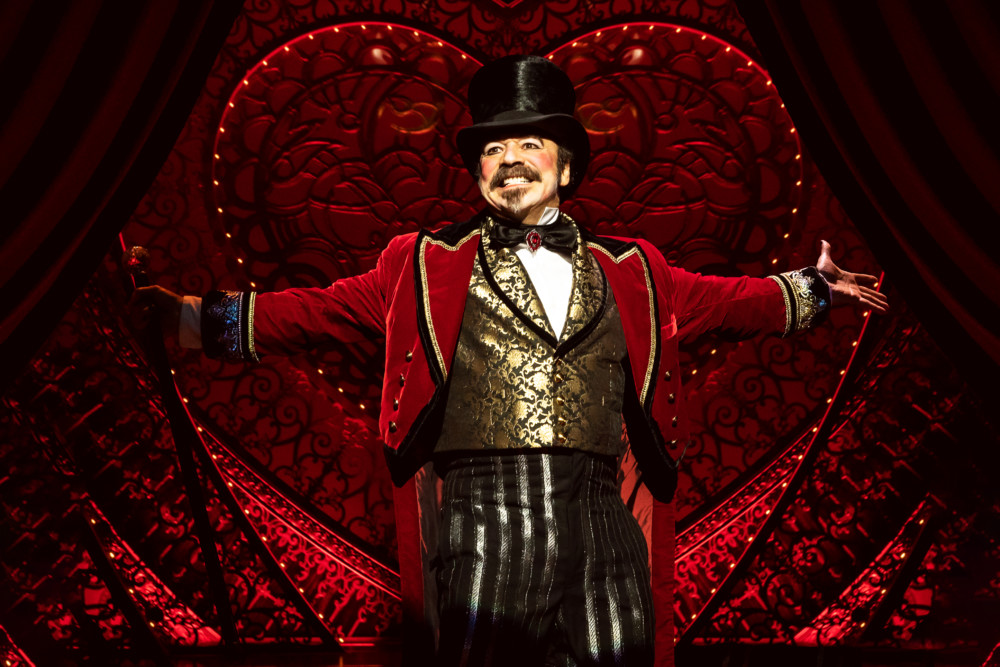 ROUGE AWAKENING: Right from the starting gun of the first preview, it was clear Moulin Rouge! The Musical would be a charter member of the millionaire’s club. It got there in five performances ($1,331,046). For the past two weeks, it has been grossing over two mil and, now, has a total of $13,129,518 in the till–a nonstop sellout for the past eight weeks running. Every seat is sold. . . . Withal, Hamilton still leads the pack of the 100.1% capacity crowd (Come From Away, Moulin Rouge!, To Kill a Mockingbird, Hadestown, Dear Evan Hansen and Harry Potter and the Cursed Child, Parts One and Two). . . . This is not to say there weren’t critical reservations—do these matter with a runaway hit?—but there were none for the always-excellent Danny Burstein, who outdoes himself as Harold Zidler, Moulin Rouge’s ringleader/headliner/proprietor/impresario. Burstein suggests the low-brow, bulbous buffoonery that Jim Broadbent advanced so deftly in the original 2001 film—plus, he rolls well with the lavender curve that book writer John Logan threw at the character. “Danny is one of those actors you can give practically any line to say and you know he’s going to nail it,” trumpets Logan, who’s quick to defend Zidler’s newfound gayness: “It’s an inclusive theatrical world, and I think that was an appropriate choice for the character. The flamboyance of Zidler, which is evident in the movie as well, seems a natural extension for someone who might enjoy the flamboyance of being a certain kind of gay man of that period.” . . . Broadway’s Moulin Rouge! is a third-echelon fiction using songs that weren’t around when Baz Luhrmann made his fiction film, which, in turn, only appropriated the pungent atmosphere from John Huston’s 1952 fiction film. The only through line for all three is Henri Toulouse-Lautrec immortalizing the performers in his poster art. In Huston’s film, Zidler also appears under his real name, Charles Zidler, as a throwaway character and is played by Harold Kasket, and a favorite subject for Toulouse-Lautrec, performer Jane Arvil, is likewise represented—albeit, as a singer, not as a dancer–by Zsa Zsa Gabor, who “sings” the haunting “Where Is Your Heart?” (with more than a little dubbing help from Muriel Smith, who appears as one of the can-can cat-fighters). . . The only stage alternative in town to Broadway’s $28 million extravaganza is the “widow’s might” offering of Bated Breath Theater Company. Its Unmaking Toulouse-Lautrec is a site-specific 60-minute atmosphere soak, crammed into the tiny upstairs bar at Madame X waaaay off Broadway on Houston Street. Lurking prominently in the shadowy colored lights are Sean Hinckle as a mostly mute Toulouse-Lautrec and Allison Houser as a charming Jane Avril. The company’s executive artistic director, Mara Lieberman, conceived and directed this immersive entertainment and brought it off on a shoestring–$10K to mount it and $10K to run the first eight weeks. It has just been extended a third time through Oct. 30. 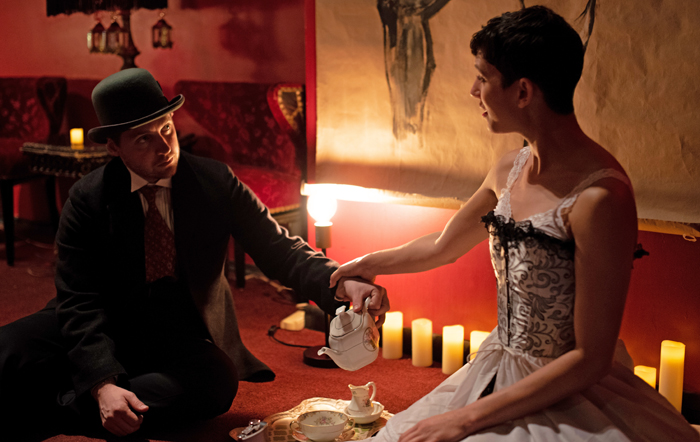 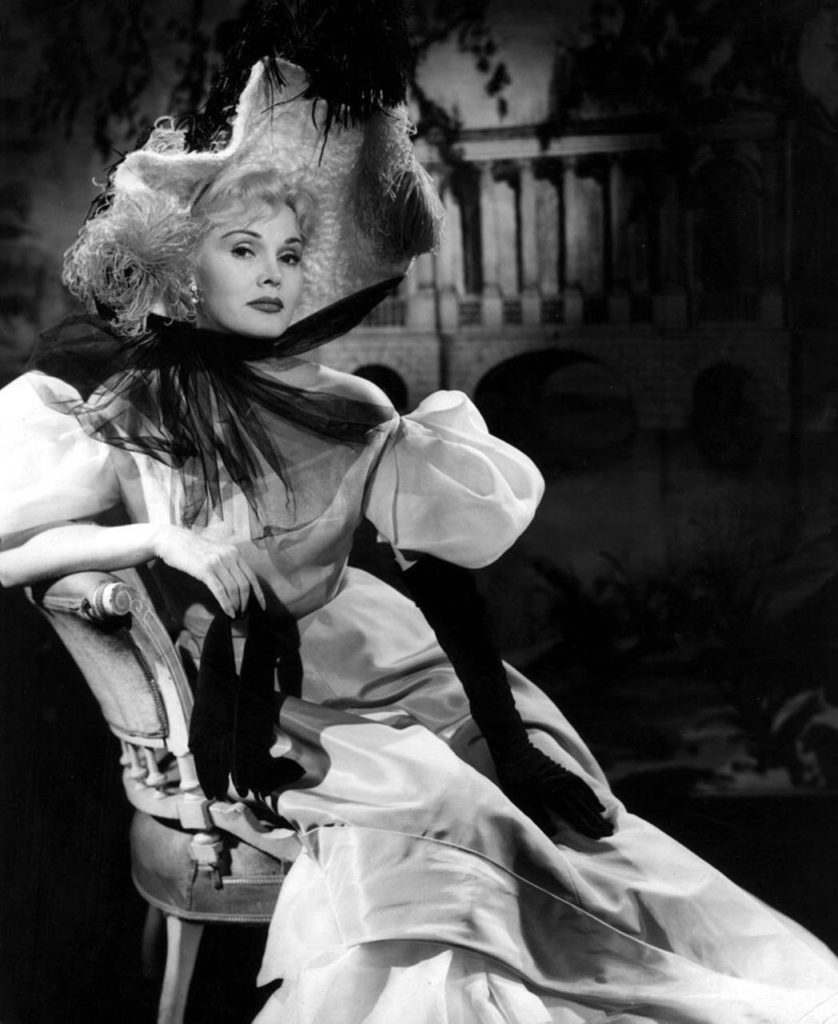 GABOR L’AMOUR: “She always wanted to be an actress”–no, Sam Staggs corrects himself—“she always wanted to be a movie star. She wasn’t interested in the work that goes into it. Eva was the one who always wanted to be an actress.” It’s not often you find a biographer who embraces his subject’s shallowness as warmly as Staggs does. Zsa Zsa Gabor’s life spanned two continents, nine husbands and 99 years, but it wasn’t until he heard on the news that they were administering her last rites that Staggs welled up and decided to write her life story. . . . The result is Finding Zsa Zsa: The Gabors Behind the Legend, and he will field the Q&As on it Sept. 23 and Sept. 24 at special Film Forum screenings of Moulin Rouge (no exclamation point). Finding the film that best represents Zsa Zsa is no easy task, but the 10-12 minutes she spends in this picture are about as pure as it gets. . . . “’Overnight sensation’ is a phrase thrown around a lot, but Zsa Zsa literally was,” insists Staggs. She badgered Husband No. 2, George Sanders, to get her roles in films–to no avail. He pooh-poohed her career (“Oh, you’d just be in the way”). When he went to England to film Ivanhoe, she got cozy with his brother, Tom Conway, who at the time was doing a West Coast panel show, Bachelor’s Haven, and suggested Zsa Zsa as a last-minute substitute. She arrived at the studio sparkling. When the host commented on the sparkle, Zsa Zsa shrugged, “Oh, darling, these are just my working diamonds.” That line and others—plus her ravishing looks—got her in the L.A. papers and soon a top agent, Russell Birdwell, had Mervyn LeRoy cast her in Lovely To Look At. She played a character named Zsa Zsa (like, there could be another person on this planet named Zsa Zsa). . . . Her second role, Moulin Rouge, was harder, made harder by Huston, who didn’t want her. “He had a paralyzing effect on her,” says Staggs. “The cameras scared her to death, and Huston yelled a performance out of her. ‘You can’t act! You can’t sing! You can’t dance! At least look at the camera.’” . . . In 1983, 30 years later at Huston’s American Film Institute tribute, she showed up and said, ‘John, darling, you didn’t want me, but you taught me to make love to the camera, and that made me what I am today—rich and famous.” 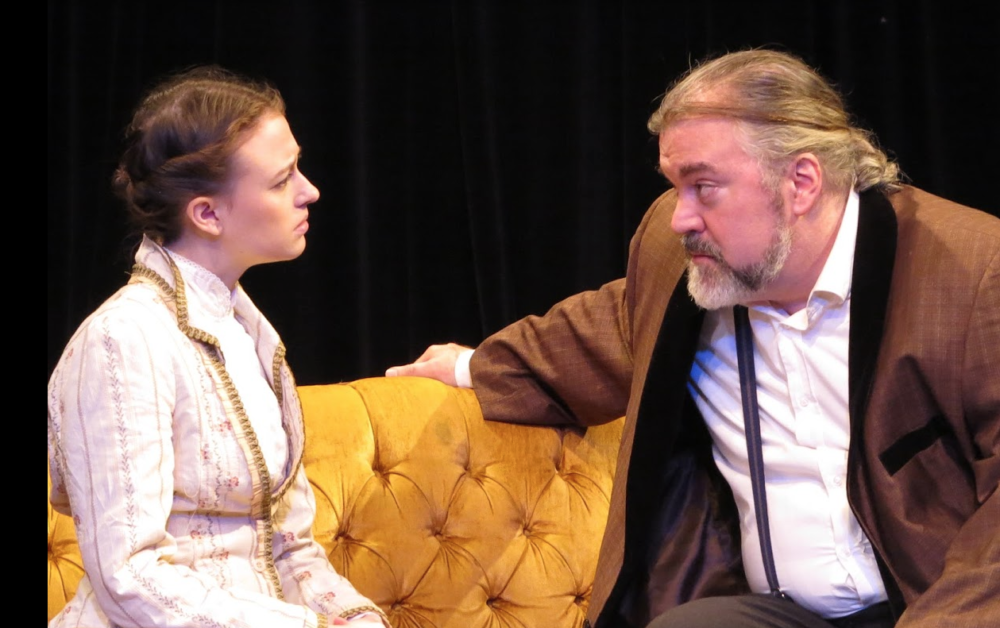 FATHER KNOWS BEST: The Father, August Strindberg’s 1887 family row about parents in a tragic tug-of-war over their daughter is getting a new translation and production from director Robert Greer at Theater for the New City through Sept. 2. Brad Fryman, Natalie Menna and Bailey Newman form the triangle. In 1949, Grace Kelly made her Broadway debut in the revival, opposite Raymond Massey. . . . This is not to be–but often is–confused with Florian Zeller’s The Father, which got Frank Langella the Tony for playing an Alzheimer’s-stricken patriarch. It is currently getting a feature film reprise from Anthony Hopkins in the UK. Olivia Colman, the Oscar-winning Queen Anne (The Favourite) and the Emmy-nominated Queen Elizabeth II (The Crown), will, we’re told, drop her regal ways to play his daughter. . . . Zeller has erected quite a home front in his native France, following The Father with The Mother. Unfortunately, Isabelle Huppert came with the deal when the latter had its U.S. premiere at the Atlantic Theater Company last spring, and her thick French accent doesn’t work at all well on the English-speaking stage. . . . There should be no accent problem with Zeller’s next, The Height of the Storm, which starts previewing Sept. 10 for its Sept. 24 opening at the Friedman Theater. Jonathan Pryce and Eileen Atkins will be impeccably reprising their London performances as 50-year marrieds in a domestic crisis. 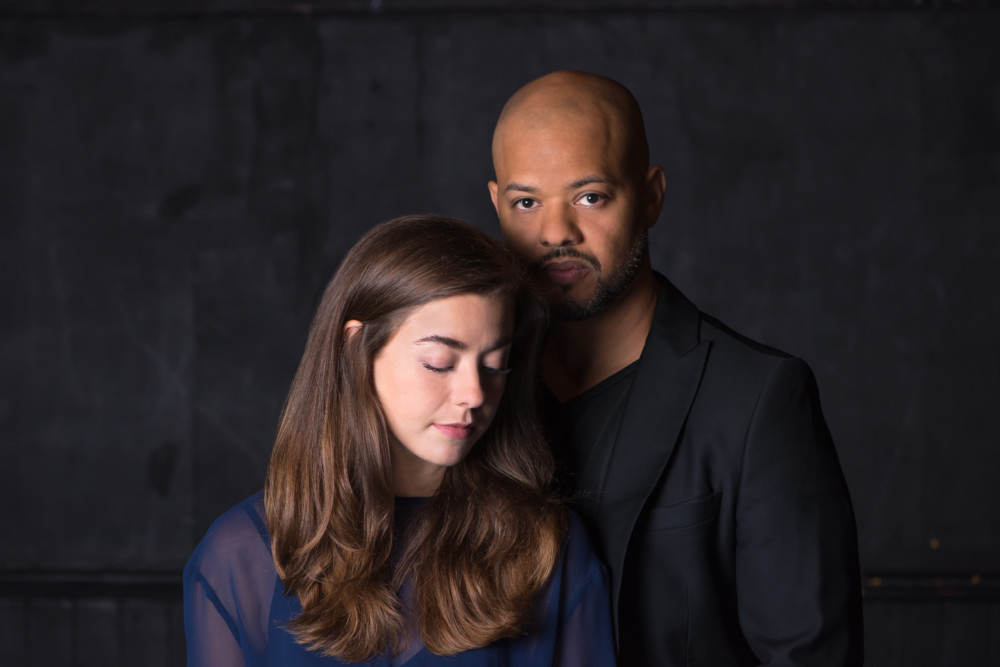 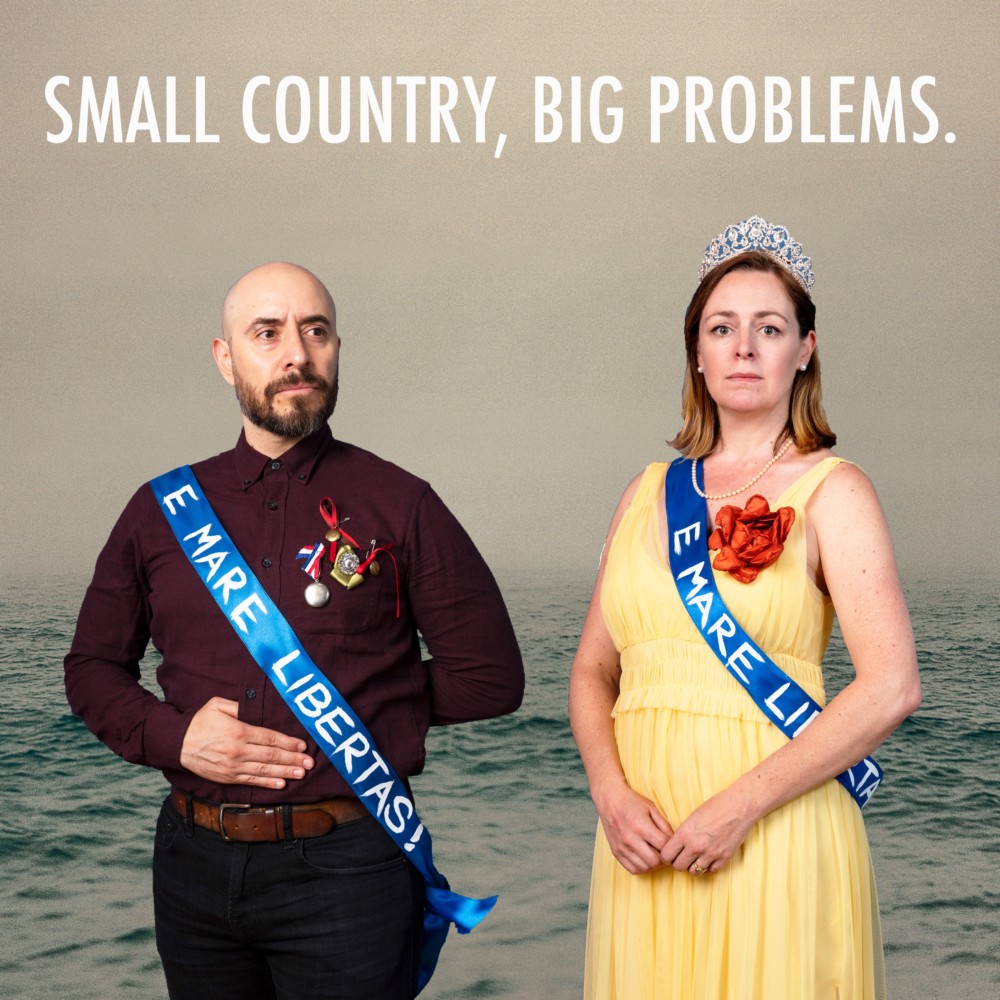 WHAT’S IN A NAME? In 1985 at the Eureka Theater in San Francisco, a bright mind named Tony Kushner came into existence with a play, A Bright Room Called Day. “It was Tony’s first professional production,” recalls Oskar Eustis, who directed it then and will direct it again Oct. 29-Dec. 8 at his Public Theater. “Along about November of 2016, Tony and I looked at each other and said, ‘Y’know, we should look at Bright Room again.’” They did just that, and out of that came a major rewrite that explores an artist’s fate in facing the once-unthinkable rise of authoritarianism in America. “It’s about the last six months of the Weimar Republic and the first six months of the Third Reich,” explains Eustis. “Basically, it’s about how easy it is for democratic institutions to be swept away.” As the title clearly indicates (NOT!) . . . There’s an interesting story to go with that title, it turns out. Kushner was at the New York Library for the Performing Arts one day to check out an exhibit on Cecil B. DeMille and he heard the voice of Agnes de Mille on tape. (Although they are uncle and niece, the director and the choreographer punctuated their surnames differently.) Agnes was saying, “This is a dance I made called A Bright Room Called Day, and instantly Kushner thought, “What a beautiful title!” Later he learned he misheard it. What she really said was A Bridegroom Called Death, but Kushner is not one to let a good title go to waste. . . . When time came for Eric Tucker (artistic director) and Andrus Nicholas (producing director) to file the corporate papers for their new theater company, they didn’t have a name for it. They knew they wanted a word that evoked a sense of play and spontaneity and high-energy, but it eluded them. Eventually, the eureka moment came to Nicholas on her birthday: “I sorta asked the universe for a name for this company as the one thing I really wanted. After dinner, I was sitting with a friend outside in the West Village, and I looked across the street. There were trees in the way, but I saw the word Bedlam in lights, and I thought, ‘Oh, my God! That’s it!’ so I texted Eric, and his response was ‘That’s perfect.’ Then, I got up and moved and looked again. The trees had been in the way, and it didn’t say Bedlam at all. It said Red Farm.” But the name stuck anyway. . . . Nichols has since broken ranks with the Bedlam troupe and formed a brand new group with Playwright in Residence Kate Hamill. For their debut offering, they’ll world-premiere Barbara Hammond’s Terra Firma at Baruch Performing Arts Center Sept. 27-Nov. 10. One hesitates to ask where she got her new company’s name. She calls it The Coop. . . . Meanwhile, Bedlam continues unabated with a seven-week run (Nov. 8-Dec. 29) of The Crucible at the Connelly. . . . Chekhov for Morons: Aaron Posner, who made Stupid F__king Bird out of The Seagull, turned Uncle Vanya into just plain Life Sucks, which closes Sept. 1 at Theater Row’s Acorn. Three Sisters, in the Brazilian show playing the BAM Fisher Oct. 23-26, comes out What if they went to Moscow? . . . Theater Mitu has chopped The Cherry Orchard down to HOUSE, or how to lose an orchard in 90 minutes or less for a limited run in Brooklyn through Sept. 8. . . . Favorite Clip Joints Around Town: Get Your Damn Hair Cut (6th Ave.) and Barber Streisand (10th Ave.).