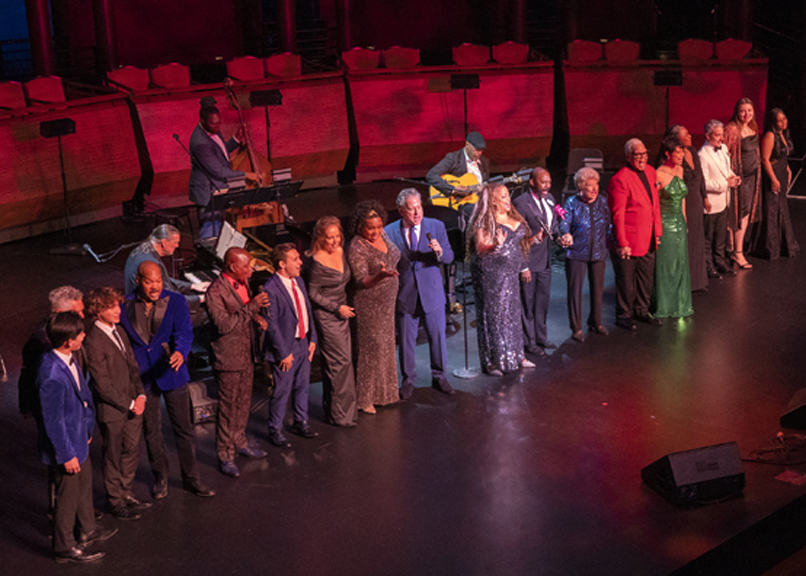 “Hi kids, how’re ya doin?” can only be the greeting of one cabaret artist, tonight’s host, Natalie Douglas. “Like most of you, I’ve loved Nat King Cole since I was a tiny, tiny child…” she gushes opening tonight’s celebration with a lively “Sweet Lorraine.” Highlight :

Billy Stritch in his balladeer guise (always a treat) assumes the piano bench with Cole’s chart topping “Somewhere Along the Way.” Accustomed to his innate swing, we can forget how well the artist croons. Valarie Pettiford erupts onto the stage with fiery renditions of “Besame Mucho” and “Quizas, Quizas, Quizas” in Spanish and English. The artist sings and dances making these chestnuts sizzle, eliciting smiles and the desire to mooove. (Ron Abel-piano,  Rex Benincasa – bongos)

The urbane Eric Yves Garcia, whose very first CD purchase was this song, plays and sings “Penthouse Serenade” showcasing the style and finesse of his Errol Flynn moustache and white dinner jacket. Piano is more fluent and melodic than ever. Garcia was visibly shaken to be given The 2022 Donald F. Smith Award endowed by Adela & Larry Elow. His halting acceptance speech was modest and eloquent. The plaque reads, in part: “…in heartfelt acknowledgment of the extraordinary, personal bond he has created with audiences… and for the presentational manner in which his inestimable gifts make every room, every song, and every crowd his own…”

Amanda King asked Larry Dunlap for an arrangement of “No Moon At All” that was “spooky, romantic, and haunted.” She received it. King’s classy, crystalline enunciation, provocative delivery and appealing alto elevate the song.

In the hands of veteran Ken Page, “Angel Eyes” is utterly bewitching. Slow and low, head turning, tilting- it feels as if we’re watching Mephistopheles and the angel’s eyes are just that. “So drink up…” he sings extending an arm of welcome. Fantasy or film noir. (Lance Horne-piano)

Also featuring: Aaron Lee Battle- step-,tap, step-tap, who swings as naturally as eating breakfast; the always artful Gabrielle Stravelli with “Beautiful Moons Ago”- which should be performed more often; a lovely snow globe version of “The Christmas Song” by Scout Coulter (John Boswell plays lovely, ruminative piano); Darius de Haas’ “Nature Boy” in tones like shadows. Ever great Marilyn Maye brings the house down with “Here’s that Rainy Day” and Stormy Weather” –  in superb arrangements by Tedd Firth also at the piano. Has it occurred to you that the artist is in part so popular because she sings truth?

“L-O-V-E” is rendered (grinning) by vivacious Natalie Douglas in half a dozen languages – “to those who speak these languages, I apologize;” Nicolas King performs a deftly subdued “Where Can I Go Without You”; “Straighten Up and Fly Right” arrives by way of theatrically gleeful T. Oliver Reid; and a  very cool “Hit That Jive Jack” spotlights the three fine musicians who comprise tonight’s house band.

Youthful debuts include :Julia Parasram (a finalist of the Adela & Larry Elow High School Songbook Contest) who sings “Don’t Go”- exhibiting talent and a need to modulate ; Bryan Eng also at the piano with “On the Street Where You Live” which arrives without a sense of lyric content; Katelyn Myers (this year’s winner of the Jim and Elizabeth Sullivan Foundation Scholarship) showing clear promise; and, offering “Smile,” 15 year-old Elias Javier (a scholarship winner from the Tim and Elizabeth Sullivan Foundation) in pristine, if as yet impersonal interpretation.

The iconic “Unforgettable” closes out an evening during which, in fact, much was just that.