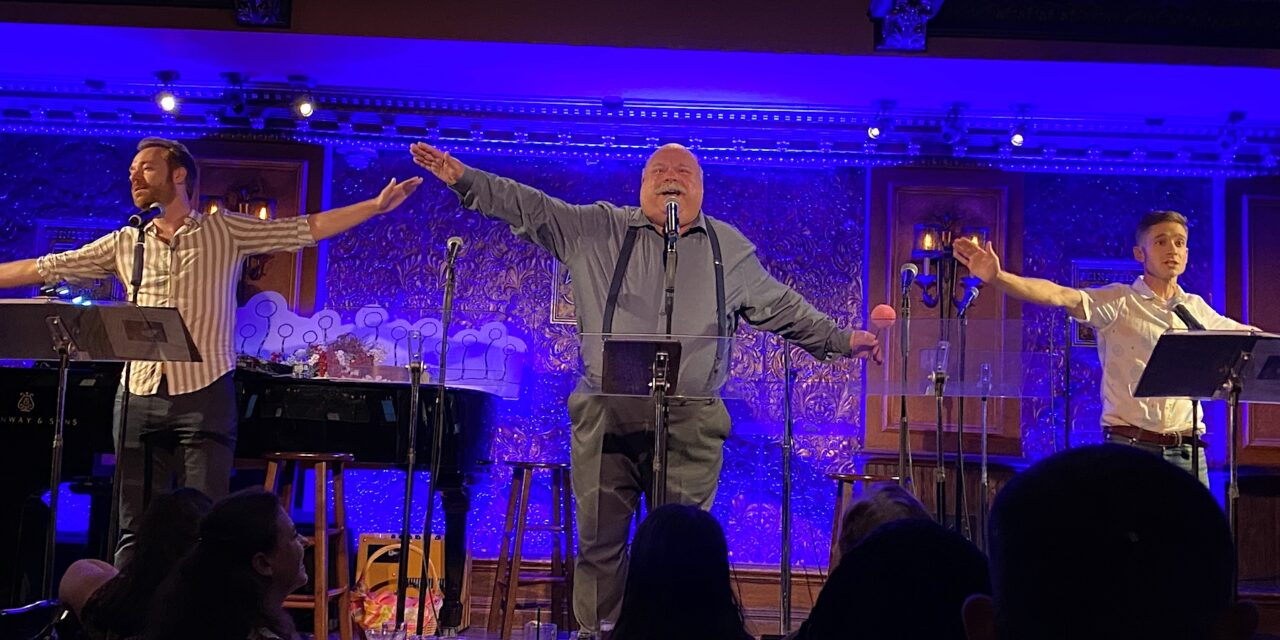 A delightful one-night only reunion concert of Seussical, the Lynn Ahrens-Stephen Flaherty musical of all things Seuss, took place on November 22 at Feinstein’s 54 Below. Celebrating its opening on Broadway twenty-one years ago this month, I caught the first of two sold-out shows that were performed by a cast of seventeen veterans of its original company, all squeezed onto the tiniest of stages. Cramped, but comfy, and backed by just a piano (it’s all that could fit), the music and lyrics still stylishly enchanted and entertained.

Forgoing all patter, the score was performed from start to finish in a smooth 75 minutes with little dialogue from the show. Some songs were cut or shortened from the full-length show and one was even added, which featured the Lorax, a Seuss favorite, eliminated in Boston. For the record, Seussical had an extremely rough out of town run with a change of directors, among a number of other elements discarded and/or replaced. Running only six months on Broadway, it was not a success, but it’s proved one of the most popular musicals of the last two decades in regional, stock and amateur productions the world over. That is, of course, due in large part to the extraordinary name recognition of Dr. Seuss, but also a testament to the sweetness of the adaptation, which captures a great deal of the famed children’s author’s wit. Never talking down to his loyal following among both adults and kids, and with his simple rhyming of usually nonsensical words, Seuss (Theodore Geisel by name) was truly a great man of literature, especially when you consider how often his books were used as tools of learning for getting kids to read and, more importantly, enjoy it. His work will endure as long as books are still a thing (let’s hope).

Among the original cast members taking part was first and foremost Kevin Chamberlin, repeating his Tony nominated performance as Horton the Elephant. The role was actually written for Chamberlin, who first got to know Ahrens and Flaherty when he made his Broadway debut in their 1992 musical version of the 1982 film comedy My Favorite Year. Dressed all in elephant gray, Chamberlin was quite at home bringing back Horton in all his sweetness and innocence. The undoubted highlight was “Alone in the Universe,” perhaps the show’s best known song, which Horton performs with JoJo, the little Who that becomes his friend. For the concert, JoJo was shared by Anthony Blair Hall and his understudy Cameron Bowen, both now considerably more mature than the respective thirteen and twelve year-olds they were back in 2000. (see lead photo)

Cathy Rigby was on hand to bring mischief to the Cat in the Hat, ostensibly the play’s master (or mistress) of ceremonies. Originally cast with Eric Idle in the role (who had an early hand in creating the show), Broadway saw it eventually star master mime/clown David Shiner as the Cat. Later, Broadway audiences got to see Rigby and Rosie O’Donnell in the roles. And, in fact, Andrea Martin was the very first to play the Cat to paying audiences during a Toronto try out.

Other standouts at 54 Below included Janine LaManna, the original Gertrude McFuzz, and to whom the years have been extremely kind, as her singing was indistinguishable from her performance on the cast recording. Afterwards, I was introduced to her and her two children, neither of whom was born in 2000 when she first sang “The One Feathered Tail of Miss Gertrude McFuzz.” Sara Gettelfinger, an original member of the ensemble who understudied the role of Mayzie LaBird, got her chance to sing that wonderful character’s hilarious songs. Looking like a rare bird indeed with her hair piled high, her performance was in the stratosphere as well. Stuart Zagnit as the Mayor and Ann Harada as his wife (who originally understudied the part) came off beautifully. Those not mentioned who also enthusiastically took part in this reunion were Joyce Chittick, Natascia Diaz, David Engel, Justin Gomlak Greer, Catrice Joseph, Eddie Korbich, Darren Lee, Tom Plotkin and Jerome Vivona. The pianist and musical director was David Madore who acquitted himself admirably.

After the bows, Lynn Ahrens and Stephen Flaherty were brought to the stage for a sustained ovation. Among other remarks, Ahrens acknowledged the two cast members who have died since 2000, Eric Devine and Alice Playton, to whom both were paid tribute during the elaborate slide show that was presented throughout the evening. Effectively, it offered up everything from Seussical’s TV commercial to video of performing at the Macy’s Thanksgiving Day Parade.

Though at one time referenced as something of a turkey (it had the unfortunate timing of opening days after Thanksgiving), Seussical has, as Lynn Ahrens mentioned, become a show that has “risen like the phoenix.” And for a musical comedy, having the last laugh is an especially sweet thing. Happy Anniversary.