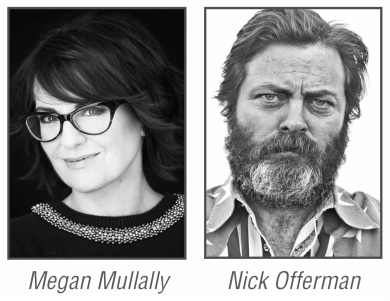 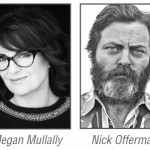 Twenty years ago, Emma (Megan Mullally) walked out on her husband, cowboy-poet Ulysses (Nick Offerman), in the middle of the night.  Now hearing he’s in dire straits, she tracks him down in the wilds of Colorado in a grungy trailer, working on his magnum opus, hooked to an oxygen tank, and cooking in the buff.  Their reunion, charged by rage and compassion, brings back the worst and best of their former bond.  The New Group presents Annapurna, written by Sharr White and directed by Bart DeLorenzo, as the third show in the company’s 2013-2014 season.

Sharr White’s The Other Place received its world premiere Off-Broadway with MCC Theatre, featuring Laurie Metcalf (Lucille Lortel and Obie awards) and directed by Joe Mantello (Lucille Lortel nom).  The Other Place subsequently received its Broadway premiere in the spring of 2013 at Manhattan Theatre Club with Joe Mantello again directing Laurie Metcalf (Tony nom).  The Other Place was also a recipient of the 2010 Playwrights First Award; the 2011 Blanche and Irving Laurie Foundation’s Theatre Visions Fund Award; and was an Outer Critics Circle Award nominee for Outstanding New Off-Broadway Play.  White’s The Snow Geese premiered on Broadway at the Samuel J. Friedman theatre in the fall of 2013, starring Mary Louise Parker and directed by Daniel Sullivan, as a co-production between Manhattan Theatre Club and MCC Theatre.  Annapurna premiered at the Magic Theatre in San Francisco and was a finalist for the Steinberg/ATCA New Play Award.  White is currently working on a commission from Steppenwolf Theatre Company.