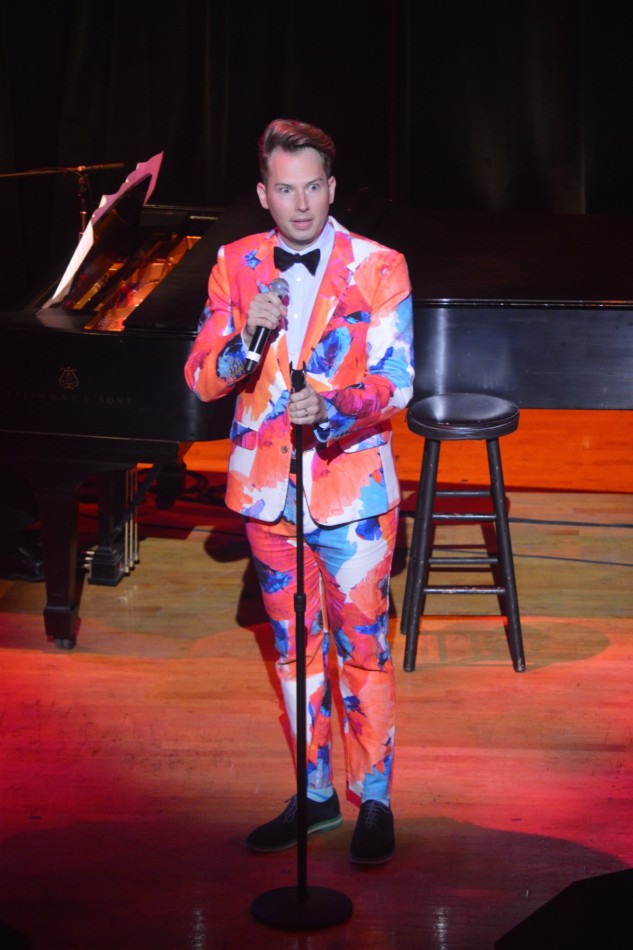 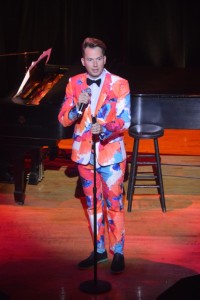 Fresh from his appearance at Town Hall, as part of the Mabel Mercer New York Cabaret Convention, on a program devoted to Vernon Duke and Marvin Hamlisch, Shawn Ryan appeared at 9:30 pm at Don’t Tell Mama (Oct. 16)  in a show entitled “Shawn Ryan Live With The Kelly Park Band.” The band included Park on piano, bass, and drums and percussion. Ryan was dressed in a multicolored spotted suit with black shirt (at the Convention he had a white shirt and black bow tie) and, at one point,  went off stage and changed into colored shorts. The outfit was created at the suggestion of Marilyn Maye who was in the audience with other cabaret stars and several of his students from his youth camp and included the shorts because it was very hot at Cannes where he premiered the movie “charlie” which he produced and directed and is making the festival circuit.. He opened with his version of “Wouldn’t It Be Loverly” interspersed with ad lib comments. (“Someone’s head resting on my knee” got a big laugh.)

Some of Ryan’s act were numbers he has been doing for years but he has not performed in New York for several years and there were fake starts on “Send In The Clowns” and the Starbucks song. He did a wild riff on “Snow White” and was completely crazy on “I Want To Do Bad Things.” There was the crazy song about “Republicans” and what it’s like to sleep with one with its great raunchy punch line.

The Vernon Duke medley was devoted to songs sung by Bobby Short, Lena Horne, and Ethel Waters and chosen at the Convention to be sung by a “gay white Protestant!” Of course, the Waters’ number was “Honey in the Honeycomb” and Ryan milked everything out of the word “honey” in the lyric. His other wild song was the one from “Bubbling Brown Sugar,” “If I Can’t Sell It,” done with a chair of course!

He talked about Ella Fitzgerald’s swinging Christmas album and sang the song about Santa Claus getting caught in the chimney emphasizing the words “In” and “Out” making it as risqué as possible. Also, there was his trademarked Streisand medley that begins with “Down With Love.”

And, of course, his exit song was the Meryl Streep inspired number by Shel Silverstein, “(I’m Checking Out of This) Heartbreak Hotel,”’ from “Postcards From The Edge.” The audience wanted more but there was a great reception in the restaurant so we all adjourned there.

Ryan is traveling all over the country with “charlie” and his next film is about an autistic child and the cute young star of that film was also in the audience.