She Said at NYFF60 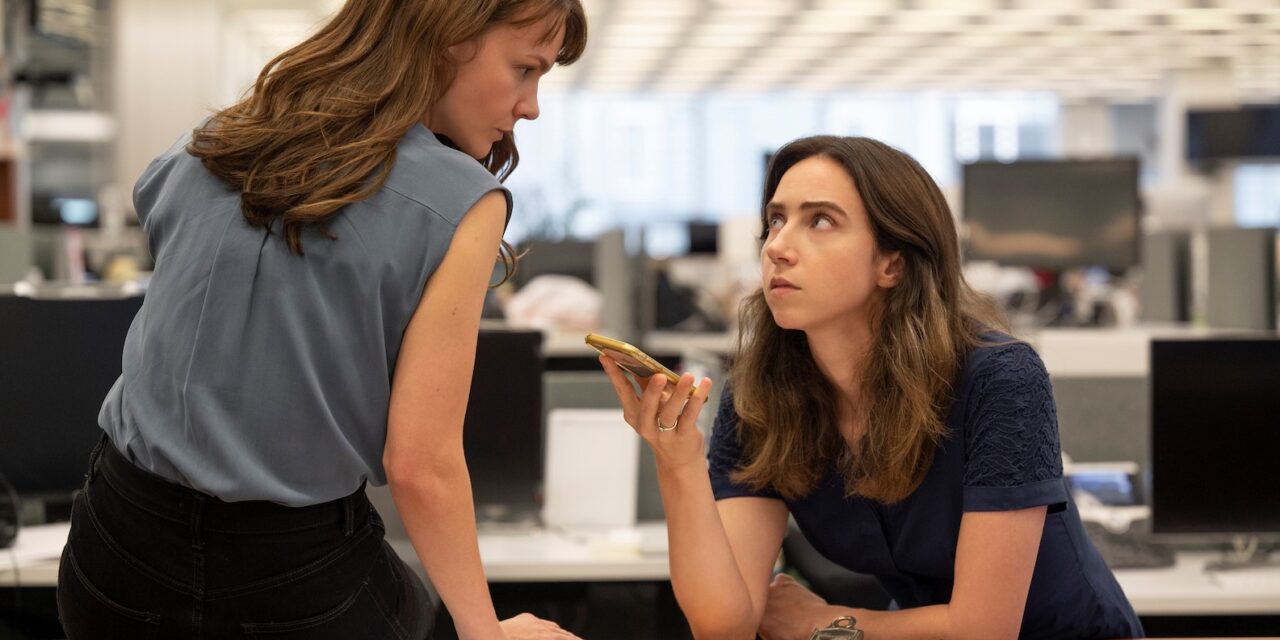 In 2017, Jodi Kantor and Megan Twohey smashed through the patriarchal norms that allowed and even encouraged sexual predation in the workplace with cover-ups, settlements and NDAs. With incisive, investigative reporting, Kantor and Twohey published revelations of Harvey Weinstein’s sexual abuse in a devastating expose in The New York Times. The article sent shock waves through the culture and gave women a foundation from which to protect themselves and others by bringing to light the extent to which male folkways in workplaces supported sexual abuse.

Director Maria Schrader’s brilliant and thrilling drama She Said gives the insider account of how the two New York Times reporters struggled to gain the trust of Ashley Judd, Rose McGowan and others not well known to go on the record against one of the most powerful men in the film industry, who had tentacles in every aspect of media and entertainment.

Based on Kantor and Twohey’s titular best-seller and generated with a tight screenplay by Rebecca Lenkiewicz, Schrader unspools the startling events like a dangerous adventure. Zoe Kazan and Carey Mulligan (Kantor and Twohey) are terrific as the dedicated and emotionally committed reporters who juggle families and negotiate risks to their personal lives by taking on Weinstein and the power structure which included law enforcement that supported Weinstein, the kingpin and money maker for parent company Disney. Clearly, all knew Weinstein to be a capo de tutti capi one didn’t contravene if one wanted to work and have a solid career.

As Kantor and Twohey gradually learn about those Weinstein abused, they discover the extent of the cover-up and conspiracy of silence by men and women who indulge Weinstein’s power grid. As Kantor goes to the UK to investigate leads, Twohey supports Kantor’s investigation on her end, while gradually gaining the trust of Rose McGowan and another woman she discovers, who never has the courage to go on the record because she signed an NDA and received a settlement.

In one of the most salient segments of the film, Schrader includes Kantor’s interview with Zelda Perkins (Samanta Morton) Weinstein’s former assistant. The well-acted segment gives an important clue to how lawyers’ complicity ensures that the predators continue their sexual abuse and evade accountability. The NDAs even mitigate the predator’s counseling to stop his sickness.

Morton’s Perkins explains to Kantor that she signed an NDA with such rigorous stipulations that Weinstein’s lawyer told her any attempt to take the crime of sexual harassment to court would result in her being “utterly crushed,” given the disparity of power between her and Weinstein/Disney. She couldn’t seek counseling unless the counselor signed an NDA. And though her side of the NDA stated that Weinstein must seek counseling and monitors were to be provided to protect female employees, she found out later that none of it was enforced.

Meanwhile, Weinstein’s lawyers were so ferocious about her keeping silent to friends, family, future partners, the terrified Perkins naively believed she would be jailed or made bankrupt if she broke her silence. Furthermore, she was never given a copy of the NDA.

Upon further investigation, Twohey and Kantor discovered this was the “legal” conspiracy of silence which victims were forced to sign, part of the normalization through legal intimidation. The segment with Lisa Bloom, a feminist lawyer who switched to join Weinstein indicates the extent of monetary seduction.

Thus, numbers of Weinstein’s accusers went the route of the NDA. Sardonically, the point is made that they had signed away their own innocence twice. Once, in not fighting harder against calling down Weinstein. Second, that they didn’t pursue holding Weinstein accountable, but became complicit for hush money, a coward’s portion.

Though The New York Times’ bosses (Patricia Clarkson and Andre Braugher give fine performances) have the power and credibility to back the burgeoning story, Weinstein’s pernicious bullying and demands of privilege create the atmosphere of fear and despotism. As they negotiate for a statement by Weinstein, they must not cave in. They must stand up to his lies, his intimidation, his craven insults. This backstory at The New York Times is just superb.

Schrader, who includes a voice over of Donald Trump ranting that his accusers are liars, sets up the parallels between Weinstein and Trump. We discover the abuse has continued for decades and the perpetrators know how to select and manipulate their victims and handle any fallout by intimidating them with complicity, money and fear for their lives and careers.

Schrader’s She Said, like The Insider (a whistleblower exposes big tobacco) and All the President’s Men, returns investigative journalism to its proper place as a noble, invaluable art to protect against the Goliaths that would be despots. The actors’ well-rounded portraits of Twohey, Kantor and the whistleblowers make this film sensational. Each actor’s authenticity—revealing the fear and risk to their lives by going on the record to bring a bully to justice—establishes the film’s power.

Finally, She Said clarifies the importance of the #MeToo movement in adhering to truth. Any debasement of it by women who would weaponize it to make false allegations against a political opponent is as egregious as are the sex predators who must be called out for their crimes. Misusing #MeToo is a throwback to the Jim Crow accusations used to lynch blacks in the South.

Schrader’s message is an important one. Considering that NDAs keep the corruption in place, Schrader points out the need for their reform or elimination in her excellent film.

She Said. For tickets go to the NYFF60 website: www.filmlinc.org/nyff2022/films/she-said/