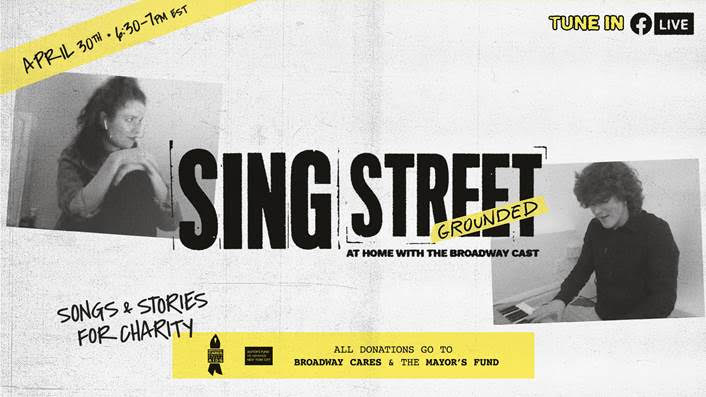 SING STREET: Grounded – At Home With The Broadway Cast will take place on Thursday, April 30 from 6:30pm till 7pm (EST) exclusively on SING STREET Broadway’s Facebook Page.  Donations can be made directly to The Mayor’s Fund to Advance New York City and Broadway Cares’ COVID-19 Emergency Assistance Fund using the Facebook “donate” button on the Facebook Live during the livestreamed event, which will be available on demand through Monday, May 4 at 6:30pm (EST).

SING STREET is a story about seeking bluer skies in a time of darkness and celebrates the joy and power of music. Dublin, 1982. Everyone is out of work. Thousands are seeking bluer skies across the Irish Sea. Conor and his schoolmates find an escape from their troubles by forming a band to impress a mysterious girl. With an original score that embraces the sounds of the ‘80s, SING STREET celebrates the joy of first love and the power of music. It stars Max Bartos, Brendan C. Callahan, Billy Carter, Zara Devlin, Gus Halper, Jakeim Hart, Martin Moran, Anne L. Nathan, Johnny Newcomb, Brenock O’Connor, Gian Perez, Sam Poon, Skyler Volpe, Amy Warren, Anthony Genovesi, off stage covers Ilan Eskenazi, Dashiell Eaves, Shadia Fairuz, Sophie Hearn, Michael Lepore, Jace Reinhard.

Relying on the talented cast, strength of the new Broadway score and beating heart of the uplifting story, SING STREET: Grounded – At Home With The Broadway Cast will feature songs including “Up,” “Drive It Like You Stole It” and “Go Now,” as well as “Love and Stars,” the world premiere of a new song written for the Broadway production of SING STREET.

Fourteen  young cast members were set to make their Broadway debuts, when Broadway was suspended to stop the spread of COVID-19. SING STREET is directed by Tony Award winner Rebecca Taichman (Indecent), features a book by Tony Award winner Enda Walsh (Once), music and lyrics by Gary Clark (front man of Danny Wilson) & John Carney (“Modern Love”), choreography by Obie Award winner Sonya Tayeh (Moulin Rouge), and is based on the motion picture written and directed by John Carney.

The SING STREET cast scattered around the world in Ireland, Great Britain, New York, California, Pennsylvania, Michigan, New Jersey, Florida, Vermont and Massachusetts will be performing from their homes, playing their instruments and singing, all in unison on Facebook Live with ambitious technological experimentation, using the medium of the moment with a young cast that is excited by and comfortable with the creative expression that’s possible with a cell phone and a laptop.