Sneak Peek “A Taste of Things to Come” 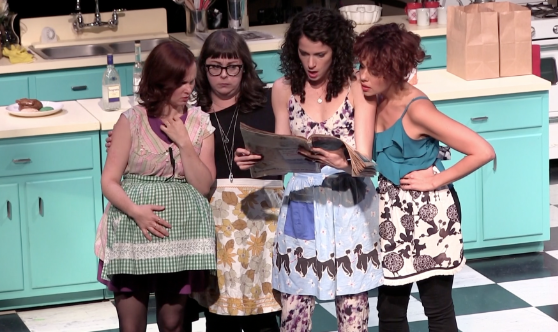 The cast and creative team of the upcoming “A Taste of Things to Come” spoke with the press and performed two of the show’s songs at the York Theatre Company at Saint Peter’s Church at Citicorp, where they will begin performances on November 9, readying for a November 17 opening night.

Mark Ryan Anderson of Theater Pizzazz was front and center to capture it all and do interviews which you can see here on the video link. The musical is written by Debra Barsha and Hollye Levin, with a directorial (as well as choreographer) debut for Lorin Latarro who recently appeared on Broadway in Waitress.  The musical takes place in the 1950s and 1960s, thru the rock n’ roll era to the Kinsey Report. The women are mixing, sifting and chopping for a Betty Crocker cooking contest imagining how the prizes could change their lives. Men may be thrilled with a wife who’s a good cook, but meanwhile women were realizing the importance of best friends.