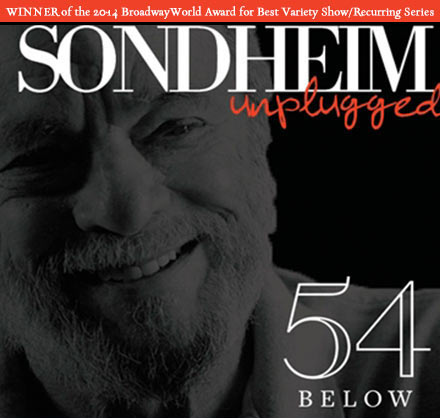 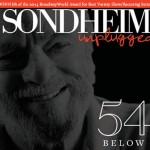 Four years on, 54 Below’s Sondheim Unplugged series continues strong with this, the 39th show. Birthed in the year that Mr. Sondheim turned 80, the series has a body of work to reference that won’t run out any time soon. The picks, as usual, were complemented by the insight and shtick of personable host, Phil Geoffrey Bond..

Rob Maitner opened the show with “Broadway Baby,” “Hattie Walker’s” turn from the 1971 Follies. Commenting on the gender change (and the show in general), Bond noted that it was Gay Pride Week. “What could be gayer than this?” he asked. Special Guest Star, Lee Roy Reams delivered “Beautiful Girls” from the same show, lighting up the stage as only a seasoned pro can.

Merrily We Roll Along debuted in 1981, after a string of successes. The show was a turkey – running for only 16 performances. The music lives on, however, and Lucia Spina as “Mary Flynn,” sang the lament, “Like It Was,” with perfect conviction. Music Director and pianist (his stronger suit) Joe Goodrich sang “Good Thing Going” from the show, a tune originally sung by “Charley,” “Frank” and company.

A Little Night Music opened on Broadway in 1973. The show gave Sondheim his third Tony award in a row (for Best Score of a Musical). Hunter Ryan Herdlicka, a true tenor with perfect diction and a soaring voice sang “The Glamourous Life,” an ensemble piece perfectly adapted to a solo turn. “Now” (Fredrik), “Later” (Henrik) and “Soon” (Anne) was sung respectively by Rob Maitner, Aaron Ramey and Sarah Rice. Arguably, the most famous of Sondheim’s numbers is “Desiree’s” solo, “Send In The Clowns,” which the composer worried sounded too much like a piano bar tune! It’s been sung and recorded by people and cartoon characters too numerous to mention. Julianne Heckert’s rendition was impassioned, if not vehement.

Sondheim wrote the lyrics for Gypsy to Jule Styne’s music (book by Aurthur Laurents). Since 1959 Mama Rose has been played and sung by a long list of divas, so why not Lee Roy Reams, who performed “Some People” (Merman, move over). Reams is not only remarkably talented, but fun. You know he’s having a darn good time on stage, and that’s wonderfully infectious. A number cut from the show (too bad), “Smile Girls,” was humorously and delightfully sung by Lucia Spina.

Sondheim’s most produced musical, Into the Woods, opened in 1987 and was subsequently nominated for a Best Musical Tony Award (losing to Phantom of the Opera). Re-enacting the entire ITW presentation in the race for the 1988 Tony, Pamela Winslow Kashani, let out all the stops. Armed with a basket of props, Kashani sang and acted seventeen parts, with a little bit of help from willing audience member, Mandy Patinkin. This comic tourlette de force had everyone in the house ready to present Kashani with an award. On a more somber note, “Giants in the Sky,” interpreted by Hunter Ryan Herdlicka, effectively communicated “Jack’s” wonder and terror.

Last but not least, very Special Guest Star, Marilyn Maye (with Billy Stritch on piano), closed out the evening. Miss Maye is Stephen Sondheim’s contemporary (she’s two years older than he is), with youthful vocal chords and energy that defy the numbers. Miss Maye sang “Robert’s” Act Two finale from 1970s Company, “Being Alive” with stunning clarity. She followed with what this reviewer will now consider the definitive version of “I’m Still Here.” Having played several of the roles in Follies in her career, the diva was finally cast as Carlotta in a Texas production, much to her delight. Much to our delight, Marilyn Maye sure is still here, and we hope she’s here for a long time to come.