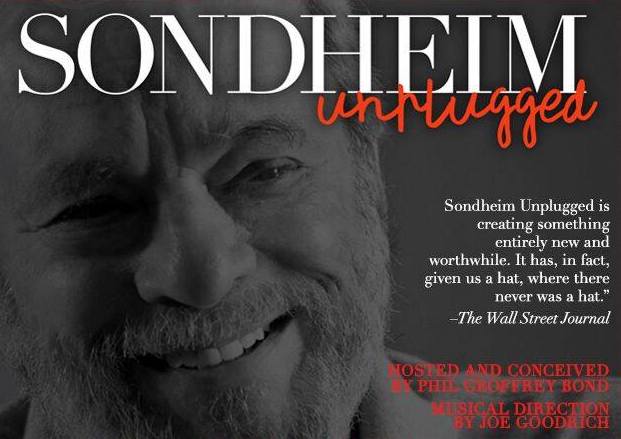 Seven years ago Phil Geoffrey Bond had a brilliant idea: start a monthly series featuring Stephen Sondheim’s music with singers accompanied only by a piano. Undistracted by full orchestration, the audience could then focus on vocals and lyrics. Sunday night’s performance at Feinstein’s/54 Below, in celebration of Sondheim’s 87th birthday this month, confirmed that the series is still going strong, primarily through the thoughtful and whimsical direction of Bond. He skillfully interweaves the classic hits of Sondheim’s signature successes with his earlier works which either foreshadow or explicitly confirm his future as an American musical icon.

Lots of us can belt out the songs from Follies, Company and Sweeney Todd but how many can easily recall tunes from Anyone Can Whistle (which, in 1964, closed on Broadway after nine performances) or the 1966 television production of “Evening Primrose”? Even Merrily We Roll Along, which gathered steam in later years, was first on Broadway in 1981 for a total of just 16 performances. This past Sunday’s installment of Sondheim Unplugged, with musical direction and piano by Joe Goodrich, featured many such examples of the early Sondheim years, which were finely performed as were some of his greatest hits. Thom Christopher Warren, Seth Sikes, and Ereni Sevasti did outstanding renditions, respectively, of “Any One Can Whistle,” “With So Little To Be Sure Of” and “There Won’t Be Trumpets” (which had been cut from the production of Anyone Can Whistle).

And Bond, as master of ceremonies, added fabulous finger food to his descriptions of what we just heard or were about to hear. For example: Bobby Belfry performed his spot-on rendition of “Our Time” and Seth Sikes sang a smooth “Not a Day Goes By,” both from Merrily We Roll Along, after which we learned, courtesy of Bond, about the twelve day run of the original production as well as the morsel that a young Rosie O’Donnell auditioned, unsuccessfully, for the show. Babs fans in attendance learned that in 1964 Sondheim hemmed and hawed while deciding to hire Streisand for “Whistle,” and she instead went on to do Funny Girl that year. The 1966 ABC Stage 67 television production of “Evening Primrose” was an interesting musical about a secret group of people living in a department store and a poet who joins the group and falls in love. “I Remember” ( a bit reminiscent of “Not A Day Goes By”) was sung by Bobby Belfry with the soulful yearning the lyrics evoked. And the lyrics! They shout Sondheim:

“Take Me to the World,” sung enchantingly by Stearns Matthews, continued the recognition we had of the Sondheim touch. From Dick Tracy, Thom Christopher Warren blithely sang “What Can You Lose” and Alexis Cole did a wonderful job on “Back in Business.”

But then there were the classics. Bruce Sabath sang hauntingly, as Benjamin Stone, the regretful “The Road You Didn’t Take“ from Follies. But it was the women, those Ladies Who Sang, who wowed this audience with the stuff legendary musicals were made of. Marta Sanders walloped the boozy “The Ladies Who Lunch” from Company, and the life-affirming “I’m Still Here” from Follies, practically bringing us to our feet. “Broadway Baby” from Follies has been done to death, but Natalie Arneson revived it with her sweet but naughty rendition, flirting with Phil Geoffrey Bond as often as she could to try to “be in a show!”

I saw the Paper Mill Playhouse Follies and was thrilled when Dee Hoty reprised her terrific performance of “Leave You” The icing on the cake? Sarah Rice, the original Johanna Barker in Sweeney Todd wrapped up the show with her still sweet voice, singing “Goodbye for Now” from Reds.

As we left the show, on the street an oddly grinning man with a runny nose approached us, trying to peddle illicit substances. “No thanks,” we said, “we have a great buzz from Sondheim!”