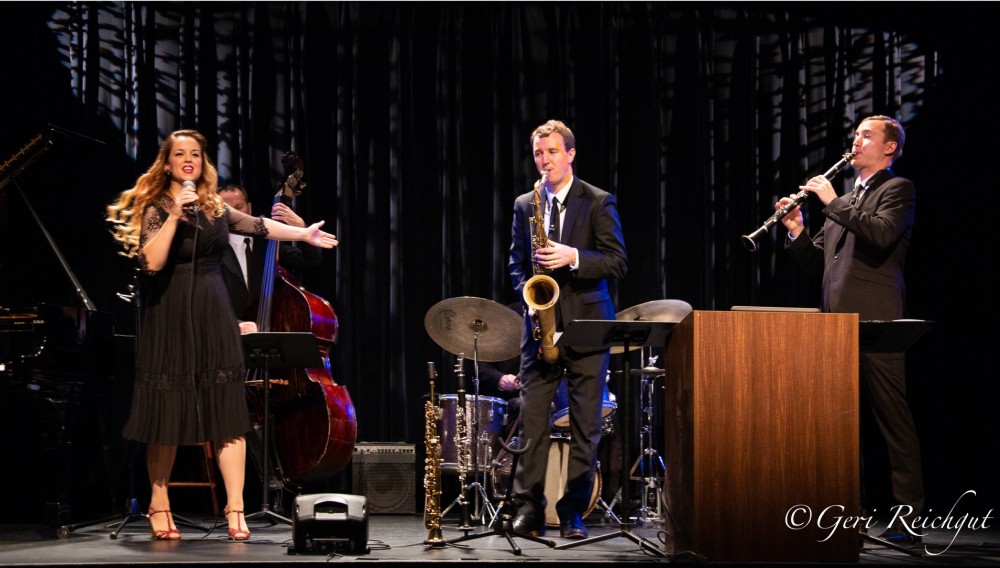 For jazz and reed virtuosos Peter and Will Anderson, Hoagy Carmichael is a songwriter who’s pretty much at the center of their wheelhouse. Carmichael (born Hoagland Howard Carmichael in 1899) grew up in ragtime and jazz. His mother played piano to help support the family, causing him to remark: “Ragtime was my lullaby.” Carmichael’s introduction to jazz was an epiphany upon hearing Louie Jordan’s black jazz ensemble in 1919. He was mentored by black pianist Reggie Duval and about ten years later, forged a strong, lifelong friendship with Louis Armstrong. The twins’ opener, “Riverboat Shuffle,” was Carmichael’s first substantive hit, a Dixieland standard, first recorded in 1924 by his pal, jazz genius and cornetist, Bix Beiderbecke (lyrics were added later by Carmichael and Mitchell Parish).

Carmichael met Beiderbecke while at Indiana University and the two became fast friends. Beiderbecke died young, at age 28 (in 1931), but such was his influence on Carmichael that he wrote several tunes evocative of Bix’s style and tone. One of them was “Stardust,” a number that Carmichael claimed, “found him” and became one of his biggest hits as well as an enduring Songbook standard. It was played hauntingly by Peter Anderson on tenor saxophone, close to the melody, with accompaniment by the talented Steve Ash on piano. (Lyrics to “Stardust were added two years after its introduction, by Parish, in 1929.) Another Bix-inspired number, also a much-recorded standard, “Skylark” (1941, with lyrics by frequent collaborator Johnny Mercer), was sung emotively by big-band-style singer, Molly Ryan. (A nostalgic reference to “Skylark” came with a projected image of the recently late Aretha Franklin recording the tune in 1963.)

In the 1930s, Carmichael’s style moved more into swing and popular music, yet the influence of jazz and its parent, the blues, generally formed the basis of his work. Such is the case with “Jubilee” (1937, with lyrics by Stanley Adams), swung up-tempo by Ryan, and with a great solo by Will on clarinet and Clovis Nicolas on bass. Carmichael’s 1929 instrumental, “Rockin’ Chair” was aced by the two Andersons with plenty of improv, adding to the inherent improvisation that bandleader and saxophonist Bud Freeman said was already built into Carmichael’s work. Another instrumental, 1932’s “New Orleans” was played by Will on clarinet, with pianist Ash. Ash also played a lively joyful solo of “Heart and Soul” (1938, lyrics by Frank Loesser).

Carmichael was, unlike his songwriting peers, more than a tunesmith. He also had active careers as a singer, radio and television host and actor. He was so well known that a cartoon version of himself appeared in a 1961 episode of “The Flintstones,” one of the many clips (curated by Will) of the evening. Many clips also featured the various performers who’d recorded “The Nearness of You” (1957, lyrics by Ned Washington), sung as a mid tempo swing by Ryan. The singer also nicely delivered two of Carmichael’s more widely-known songs, “Lazy River” (1931, lyrics by Carmichael and Sidney Arodin) and “Two Sleepy People” (1938, lyrics by Loesser). The finale of “Georgia on My Mind” (1930, lyrics by Stuart Gorrell) was played almost like an anthem, with a big, bold sound by the Anderson’s on saxophones, showcasing all talents, including the solid, steady rhythms of drummer Phil Stewart. Hats off to the Andersons for putting the spotlight on the jazz aspects of the American Songbook, and in particular playing many of Carmichael’s early and lesser-known works.

Songbook Summit continues at Symphony Space, Broadway at 95th Street, through September 2, 2018 with one more tribute to Jimmy Van Heusen. See www.symphonyspace.org or call 212-864-5400 for details.