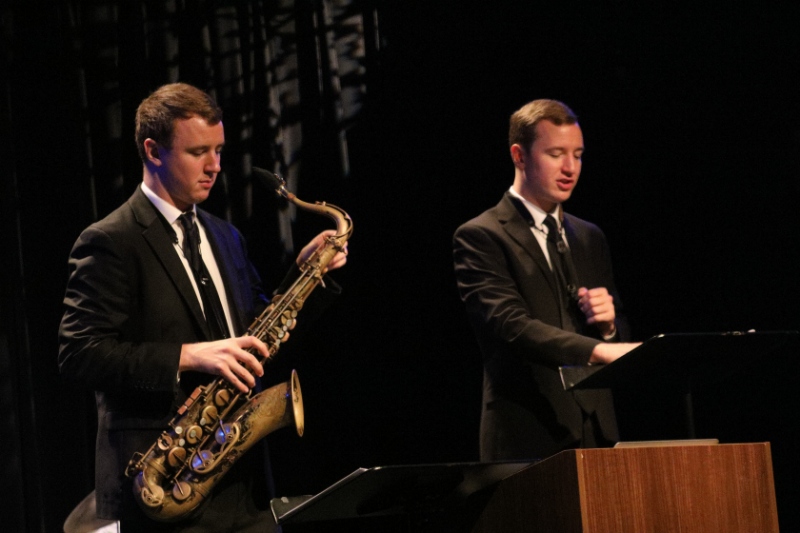 Peter and Will Anderson

Jazz’s love affair with the standards of the American songbook reaches back to the beginnings of both idioms. Proving the Duke Ellington dictum that there’s “good music and then there’s the other kind,” jazz virtuosos Peter and Will Anderson swung through 90 minutes of Irving Berlin, elevating that very good music with a modern sensibility.

The Andersons are phenomenally talented 31-year old twins with a mastery of reeds, including flute, clarinet and various saxes. Their skill in changing up the mix produces a vibrant and varied sound in their arrangements. The duo began their opener, 1911’s “Alexander’s Ragtime Band” with two clarinets, yielding a smooth, mellow sound, switching the reeds as they went. It was the start of a full-bodied 90-minute ride through the world of Berlin. The presentation included a video screen on stage left, which yielded a constant stream of slides identifying the musical numbers (with quotes by other songwriters in praise of Berlin) as well as periods of curated video clips of the man and his music. The twins have done this kind of show before; this is not only the second year of the Songbook Summit (last year’s feted Cole Porter, Harold Arlen, George Gershwin and Richard Rodgers), but the two have produced similar shows, in addition to their playing and touring. They also compose original music and are crackerjack arrangers. At this performance the stellar arrangements were Peter’s (who specializes in the tenor sax, while Will specializes on the alto). Will also tends to be the “front man” and it was he who delivered the narrative, interspersed throughout the show. There was a certain charm in that; he’s not a public speaker, but Will and Peter both exude a boyish charisma that’s the icing on the cake of their extraordinary musical talent.

Getting back to those arrangements and the love of standards by jazz artists, a very swinging version of “Blue Skies” contained a ringer in the middle: Thelonious Monk’s “In Walked Bud,” which is based on chord changes of “Blue Skies.” This clever bit of jazz business added flavor to the piece and, of course, fit in like hand in glove. Another instrumental high point came with “Puttin’ on the Ritz,” whose complex rhythmic patterns were putty in the hands of the Andersons, who applied layers of creative ideas to the underlying syncopation. Molly Ryan, the duo’s go-to vocalist, was stylistically reminiscent of a swing era big band singer, with a clear, straight-ahead delivery of the material and an appealing softness of tone. Her renditions of “Isn’t This a Lovely Day” and “I’ve Got My Love to Keep Me Warm” were sweetly engaging. A high point came with the arrangement of “Always,” which began with a traditional slow, romantic lead-in but then opened up to an uptempo swing, augmented with the brilliant combination of flute and tenor sax by the Andersons. The finale, an energetic “Anything You Can Do I Can Do Better” featured call and response riffs between the two Anderson instruments as well as the traditional vocals, here between Ryan and both brothers who gamely broke into song.

Backing up the Andersons were Clovis Nicolas on bass and Phil Stewart on drums. The evening’s pianist was Steve Ash, who displayed his chops on a solo of “How Deep Is the Ocean,” translating its harmonic depth to the keys with skill.