“SONGS THAT RAISED ME” – SAM GRAVITTE 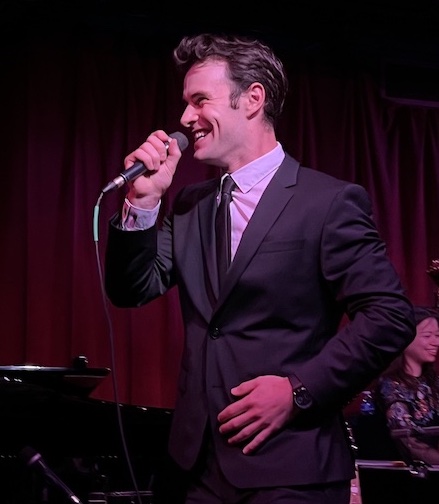 When you see someone perform live you are getting the best of them at a given moment. And on Monday night at Birdland, a venue as intimate and cozy as it gets, Sam Gravitte offered many moments, all of them golden. His show titled “Songs That Raised Me,” featured four musicians (five including him) and an astonishing singer, Solea Pfeiffer, who joined him for a single duet. Though I’ve seen Gravitte in these settings on stage before, this was the first time I experienced his putting himself front and center, offering his full personality and musicianship, which serve to beautifully showcase his talents as an actor who interprets songs. Though he’s appeared on tour and on Broadway as Fiero, the romantic lead in the long-running Wicked, he’s still only a few years into what promises to be a substantial career. Because, at this moment in time, Sam Gravitte is the real deal.

It’s in his lineage. His father, Beau Gravitte, is an actor with numerous credits in theater and television, and his mother, Debbie Shapiro Gravitte, is a Tony Award winning actress with one of the best voices in the business. “Songs That Raised Me” pays tribute to a household where the likes of Sarah Vaughn or Ella Fitzgerald sang on the stereo every night the family ate dinner. “I didn’t realize till years later that not everyone’s childhood had that sort of soundtrack,” he told the audience. “Music was always a part of my life.”

Opening with a non-Sinatra-style take on Jimmy Van Heusen and Sammy Cahn’s “Come Fly with Me,” he followed effortlessly with Cy Coleman and Joseph McCarthy Jr’s “Why Try to Change Me,” and then into an ethereal “I Could Have Danced All Night” (Frederick Loewe and Alan Jay Lerner), backing himself up on the electric guitar. And so it went all evening. There was seemingly nothing he couldn’t knock out of the park.

There was a changeup in tone when he launched into a segment he titled, “Songs I’m Into Now,” which served as an excuse to sing stuff he’s passionate about. This included a wonderful old Appalachian folk tune, “Come All Ye Fair and Tender Ladies” that he, along with his musical director and pianist for the evening, Jake Landau, arranged and composed. It was the evening’s highlight, though the team came close to topping it with “The Coin Toss.” Born out of his and Landau’s desire to do something outside the usual cabaret fare, this twelve-minute soliloquy in song did the trick: bold, original, and expertly performed.

With Landau at the helm, the other three musicians were Ravi Campbell on guitar, Kanoa Mendenhall on bass and Zach Mullins on drums, all of whom excelled. Bringing up Solea Pfeiffer, who played the title role in the City Center Annual Gala production of Evita two years ago, was inspired. Their version of “Say it Somehow,” the beautiful Adam Guettel ballad written for The Light in the Piazza, was glorious.

But so was Gravitte’s “Finishing the Hat,” his only Sondheim of the night. And the decision to sing Irving Berlin’s “Mr. Monotony,” a song that helped Debbie Gravitte earn her Tony Award (for Jerome Robbins’ Broadway), was perfection. I could be wrong, but I believe Gravitte sang it in his mom’s key! Choosing to end the night on a quiet note, alone on the stage with just his guitar, John Kander and Fred Ebb’s “A Quiet Thing” gently blew the audience away.

There’s greatness in this singer/actor. See for yourself the next time Sam Gravitte performs.