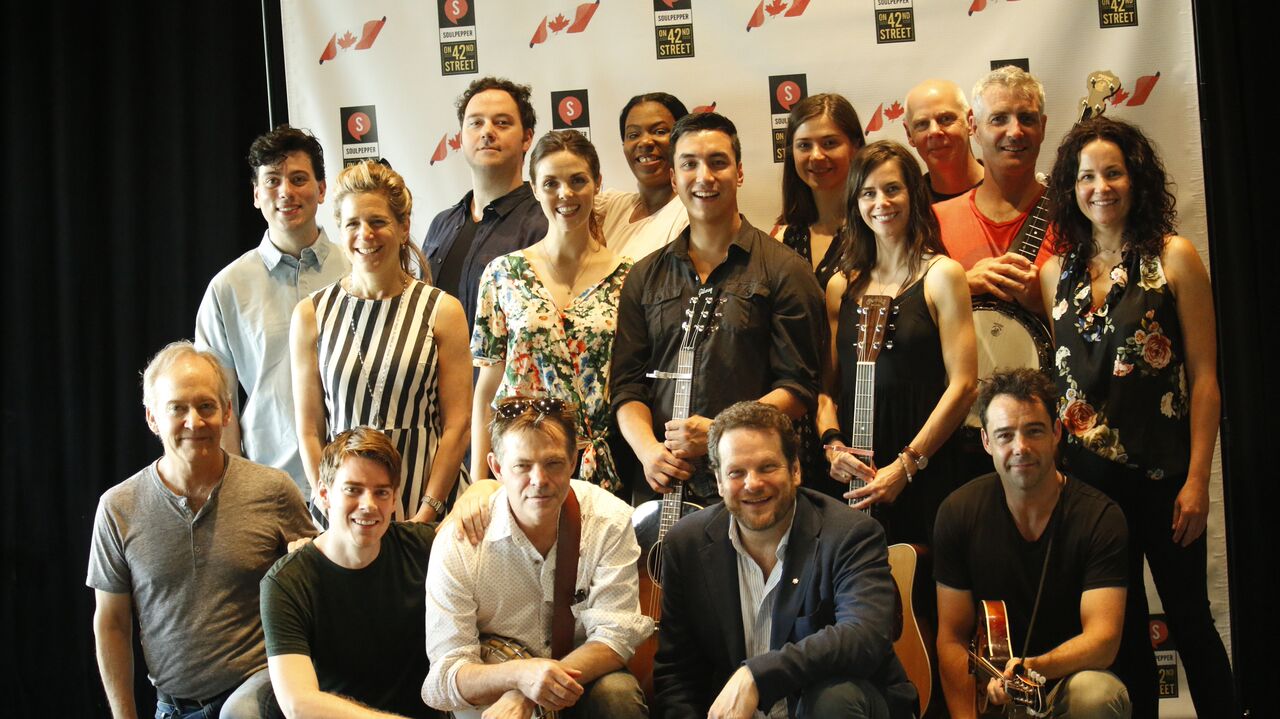 U.S. residents are invited to join SOULPEPPER for a celebration of CANADA DAY on July 1 when the Canadian Consulate hosts the opening day of SOULPEPPER ON 42nd STREET at the Pershing Square Signature Center (480 West 42nd Street) in Manhattan.

SOULPEPPER’s summer season in New York continues the welcome invasion and cross-cultural exchange of Canadian theater, following the success of the Tony Award-winning Come From Away on Broadway.

“Is your soul alive? Then let it feed!” An immersive, life affirming, graveyard musical. In a suspended moment during the burial of one who died too young, the dead come forth and share with us the unfiltered truth of their smalltown existence.  Spoon River was named Best Musical by both the Dora Awards (Toronto’s Tony) and the Toronto Critics Association.

A stage, even the one within our mind, is a cage….that defines, limits, and reveals. Inspired by apes, Zen Buddhism, and the ideas of avant-garde composer John Cage, this experimental meditation on time, space, memory, and the human animal is performed by Soulpepper Founding Member Diego Matamoros and his co-creators and designers.

LESSONS IN TEMPERAMENT
An Outside the March Production, created and performed by James Smith, directed and developed by Mitchell Cushman.

In LESSONS IN TEMPERAMENT, James Smith tunes a piano while exploring the concept of equal temperament as well as his three older brothers’ mental illnesses: obsessive compulsive disorder, autism, and schizophrenia. Smith attempts to grant balance to the instrument that has both kept him grounded and kept him company throughout his life.

Part memoir, part performance art, part tune-up, this site-specific show offers a unique theatrical experience, and a singular glimpse into the lives of those living with strange, beautiful, distempered minds.

Generations of Canadian children have grown up to the poems of Dennis Lee, “Canada’s Father Goose”(also known for his lyrics to Jim Henson’s Fraggle Rock). Five of those children, now grown-up creators, have made an absolutely delightful award-winning musical that celebrates the written word and the very notion of “play”.

A whimsical and visually gorgeous musical celebration of the works of one of America’s great 20th century poets.

After the loss of a loved one, a woman must face the shattering memories of a past trauma. CRASH by Pamela Mala Sinha is the fractured unraveling of memory; blending projections, myth, and dance into a riveting narrative about family, faith and love.

A BRIMFUL OF ASHA
Ravi and Asha Jain

After winning over crowds around the globe, A Brimful of Asha makes its New York City debut. Soulpepper Resident Artist and Baillie Fellow Ravi Jain shares the stage with his real life non-actor mother, Asha, to tell each other’s side of Asha’s attempt to arrange Ravi’s marriage.

TRUE NORTH: A CONCERT OF CANADA
Opening on Canada’s 150th Birthday (July 1, 2017) this concert will use beloved Canadian songs as the spine of an examination into the values of a nation on its birthday.

FIRST LADIES
It doesn’t get any sweeter!  Several of Canada’s greatest Ladies of Song will perform a truly unique concert of American Standards and Canadian Originals backed by at All-Star Canadian Jazz Ensemble. Don’t miss these exceptional artists on stage together for two nights only!

NEW YORK – THE MELTING POT
This concert is a love letter from Toronto’s artists to the city of New York. It traces the contributions of immigrant cultures to the creation of the soundtrack of the 20th century right here in Manhattan.

Founded in 1998 by Mr. Schultz and 11 other theater artists, SOULPEPPERgrew from its initial two-production season in downtown Toronto to an annual year-round slate of approximately 20+ productions presented in the company’s multi-theater complex in a renovated distillery in Toronto’s Historic Distillery District in the fringes of downtown Toronto. Now operating on an annual budget of $12 million, SOULPEPPER was the first tenant to anchor what is now a thriving, fully-integrated neighborhood of housing, restaurants, shops and arts.

As a national civic theatre, SOULPEPPER has a uniquely complex mission.  From its inception the company has existed not only as a producer of theatre, but as a generator of “belonging” through a vast array of civic outreach programs and youth mentorship.

The company is home to the Soulpepper Academy, the only full-time, multi-year paid artistic training program in North America for the training of Actors, Composers, Designers, Directors, Playwrights and Producers. Last year Soulpepper announced “Project imagiNation”, the largest commissioning project in the history of the performing arts in Canada.

Reaching over 130,000 patrons annually in its Toronto home, the company also tours across Canada from coast to coast, and is fast establishing its presence as a National Theatre, in and outside of the country.

In the last two years SOULPEPPER has begun the creation of digital and broadcast programming based on its mainstage activities. Its works have been adapted for radio, film, and podcasts. The company’s recording of Spoon Riverwas awarded the Silver Medal at the New York Festival of Radio, and in October of 2016 SOULPEPPER’s first television series. “Kim’s Convenience,” began airing on the Canadian Broadcast Corporation (CBC), the national network, where it is now a hit new series in Canada.