Stacey Kent Back at Birdland 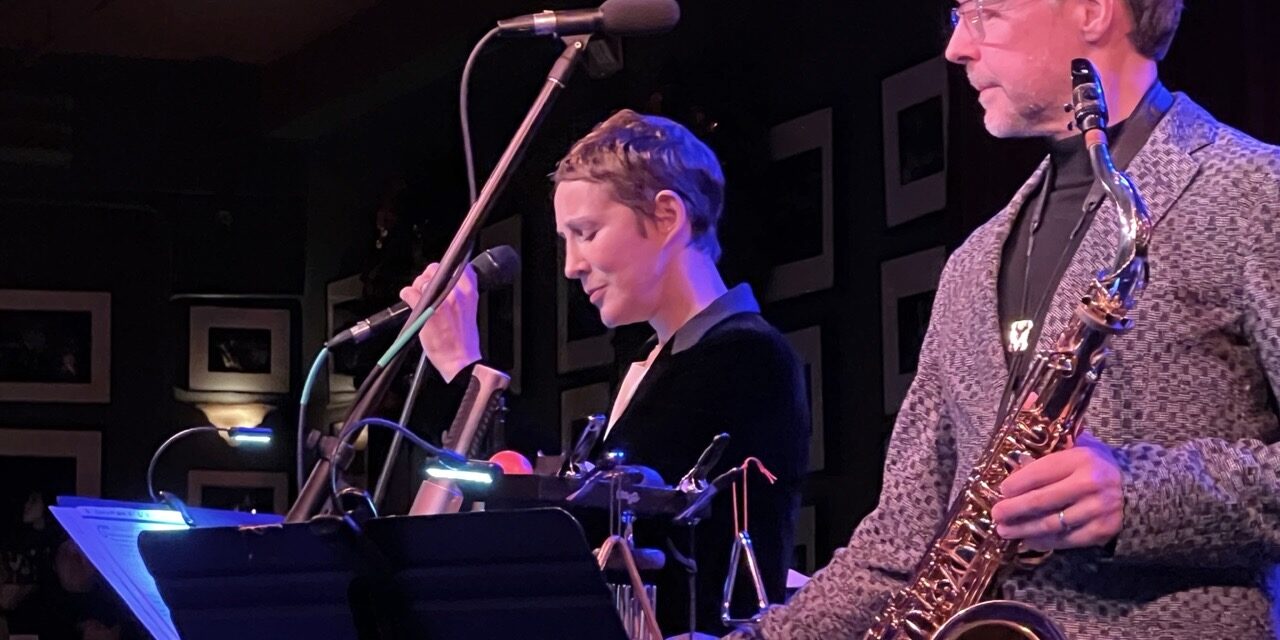 Backed by a tight-knit band, international vocalist Stacey Kent opened to a packed crowd on Tuesday at the Birdland Theater, where she’ll be crafting beautiful music at 7:00 and 9:30 pm through Friday, December 16. If you love jazz that goes down as smooth as a honey, this kind of musicianship is sure to warm you up on a winter’s night like nothing else.

At Kent’s side is her longtime husband Jim Tomlinson, who also plays saxophone, clarinet, flute, and, if that isn’t enough, performs vocals and arranges and produces her albums. Along with pianist Al Hirahara, bass player Tom Hubbard and drummer Anthony Pinciotti, they perform with the precision only years of teamwork can accomplish. And with the eclectic and myriad songwriters whose works comprise their repertoire, they put forth a masterful blend of melodies. From the first song—a slow and languid version of “Isn’t This a Lovely Day?” by Irving Berlin—to the last—a bossa nova rendering of “Shadow Waltz,” a 1933 Harry Warren and Al Dubin tune written for the musical 42nd Street—things were splendidly bent towards Kent’s unique brand of vocalizing.

In addition to covering classics by composers such as Hoagy Carmichael and Leonard Bernstein, original songs introduced by Kent over the years made up part of the set. The surprise that some were composed by husband Tomlinson, along with the Nobel Prize winning novelist Kazuo Ishiguro, led me to Google how that particular partnership came about. Here’s the story (from an interview in the Telegraph) in Kent’s own words:

“I was listening to Kazuo being interviewed on [Radio 4 series] Desert Island Discs, in 2002, with my husband Jim, as I’d read The Unconsoled and The Remains of the Day and was a huge fan. So I was shocked when one of the records he picked was mine. It was amazing, and I wrote him a thank-you letter saying how thrilled I was, and we started corresponding by email . . . We met over lunch. I suppose it was a bit awkward as I was in awe of his work, but I instantly liked him. I realized we had so much in common and also shared a creative vision.

That same year, I asked him to write the liner notes for the album “In Love Again,” and he agreed. When I read them, I felt completely understood. He spoke about how I sung my lyrics like I was a character in a novel, singing aloud, yet talking to myself, reflecting. It really grabbed me.”

Ishiguro’s phrases are marked by uncommon rhythms and an avoidance of rhyme. Take a line like “you said we’d tango in Macao, but we’ve done nothing of the sort,” or this quatrain from a song titled “I Wish I Could Go Traveling Again”:

“I wanna be awakened by a faulty fire alarm
In an overpriced hotel devoid of charm
Then fall asleep again back in your arms
I wish I could go traveling again.”

With “Lucky to Be Me,” composed by Leonard Bernstein for On the Town (one of my personal favorites), Tomlinson captured its aching melancholy in a gorgeous solo saxophone arrangement. Then, when Kent joined in vocally, her interpretation of Betty Comden and Adolph Green’s lyrics made a case for their significant contribution to the song in ways usually overshadowed by how damn great Bernstein’s music is (it didn’t hurt that Al Hirahara’s Bill Evans-style piano was perfection). There was also a charming tribute to Burt Bacharach (still with us at ninety-four) by a medley of “Trains and Boats and Planes” and “Alfie,” both enormous hits for Dionne Warwick (also still with us at eight-two). Bacharach was a primal force in my childhood with hit after hit playing over the radio, constantly on in my home. Hearing his songs last night was a joyful reminder of how fine a composer he is.

Kent’s voice is a throwback to another era when popular music was the gold standard, embodied by similarly tinged vocalists like Blossom Dearie and Teddi King. However, Kent mixes it up a bit more than they did due to a fondness for Brazilian music. Her rendition of Astrud Gilberto’s “How Insensitive” was lovely and illuminating its plaintive “what can you say when a love affair is over” with a gentle heartbreak.

There’s nothing else to add, other than what’s been previously mentioned, which is that Stacey Kent is appearing twice nightly at Birdland through this Friday (and well worth a visit).