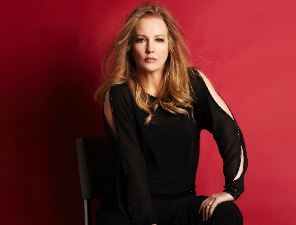 Indefatigable Stacy Sullivan performed not one, but two different shows in an evening of music at Birdland Jazz Club, knocking both out of the park. It’s a Good Day – A Tribute to Miss Peggy Lee, and On the Air – Songs for Marian McPartland are part of Sullivan’s standard repertoire, each featuring a snappy jazz overlay, arranged by the hugely gifted Music Director and piano man Jon Weber. Solid backup was provided by Steve Doyle on upright bass and Troy Fannin on guitar.

Both shows are minutely researched, curated with smart biographical choices. The compelling snippets of personal history are squarely supported by the music. “The Folks Back Home,” for example, illustrates the return of Lee to her native North Dakota for a special award ceremony. McPartland’s compositions “Portrait of Ray Charles” (paired with the hymn “Come Thou Fount,” and “Portrait of Marcia Ball” (paired with “Nightlife”) address McPartland’s long tenure as host of National Public Radio’s show, Piano Jazz (now hosted by Jon Weber). Sullivan delivers the text with a conviction that suggests she was an intimate, life-long friend of the women she’s chronicling. It’s evident that Sullivan has a great deal of love and respect for each, and in telling their stories, we too come to share that affection.

Both Sullivan and Weber are versatile performers; each seems to be able to master any style and idiom. The two share a good-natured, creative chemistry, especially evident on “I Love the Way You’re Breaking My Heart” and “I’ve Got a Crush on You.” Jazz was in the air from the top of the Lee show; the “Rhythm Medley” (“I Got Rhythm,” “My Romance,” “One Kiss”) not only showcased Weber’s jazz chops, but provided a key to the way Sullivan constructs her shows: with a deliberate rhythmic ebb and flow from start to finish. Sullivan offers a range of moods and emotions, from understated as in “I Don’t Know Enough About You” and “I Love Being Here With You” to the playful “He’s a Tramp” to the dramatic “Where Did They Go” (each of these part of the Lee tribute).

Both Peggy Lee and Marian McPartland were not only performers, but composers, and their work is featured heavily in their tributes, such as Lee’s “Johnny Guitar,” “You Was Right, Baby” and “It’s a Good Day;” and McPartland’s “Stranger in a Dream,” “Twilight World,” and “Castles in the Sand.” Pairing songs – “September in the Rain” with “Come Away With Me” and “Old Black Magic” and “Lover” – demonstrate how these combinations layer and give texture to Sullivan’s performance. Sullivan is not only a singer, she’s an actor, and she applies a totality of her training to her performance. She deeply feels what she’s saying and what she’s singing about. “Prelude to a Kiss” and “I’m Beginning to See the Light”/”It Don’t Mean a Thing”/”Jump for Joy” brought a special pizzazz to these Duke Ellington standards, while a soulful rendition of “Oh, What a Beautiful Morning” provided a fresh spin in what might be considered “dramatic jazz.”

It’s a Good Day – A Tribute to Miss Peggy Lee and On the Air – Songs for Marian McPartland delight without a false note; Sullivan’s genuineness and ease on stage are a gift, her shows happy-making treasure boxes of performance and music.