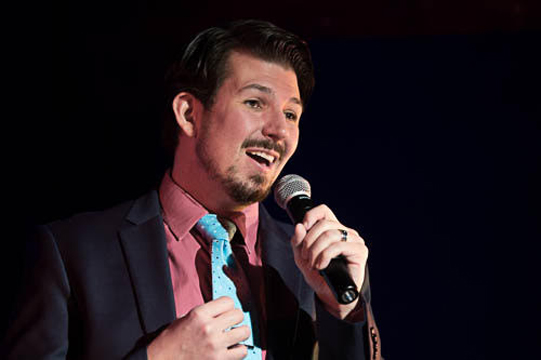 This is a perfect match of performer and writer. Stearns Matthews has just the kind of float and soar necessary to best showcase Bricusse. His light, tender renditions embrace sensitivity, while declamatory emotion arrives determined- in flight.

Matthews cites his honoree as “one of those writers whose songs you probably know without being aware of who wrote them.” In a 66 year career, Bricusse wrote for more than 40 films and musicals. He was the fourth Englishman to be inducted into the American Songwriters Hall of Fame.

Excerpts from “Feelin’ Good” bookend “Gonna Build A Mountain” with clear, slightly rippled long notes. The vocalist is in control without stressing. He’s comfortable on stage and open to being seen/sharing (‘not axiomatic.) “It’s a Musical World” showcases seamless key change. The song emerges with the lovely, minimal weight of a music box tune. Pretty arrangement. (All three with Anthony Newley)

“Once Upon a Bedtime” (with Anthony Newley) is fleecy as a blanket; phrased like musing. When Matthews at last closes his eyes, it seems natural. In the same vein, “Crazy World” (with Henry Mancini) sounds utterly sincere. “You’re cold, you’re cruel…” he sings with a small shudder. “Even though I’ll never win…” he continues with a resigned shrug. Subtle reactions appear unconscious. He’s invested. The show features five undoubtedly familiar numbers, all written with Anthony Newley. “Look at That Face” seems like a recollection rather than singing to someone in the room- or to himself. Matthews neither fixes on other eyes nor gazes towards an invisible mirror. I don’t understand the choice. That he’s infatuated, however, is credible. “Once in a Lifetime” begins with arms at his sides, plowing every bit of feeling into lyrics. Fingers curl, elbows bend, hands slowly rise as if expectation inflates. (The song is alas too short for its admirable swell.)

Matthews shakes his head reflecting “If I Ruled the World.” Shoulders rise with the word “smile.” Gravitas wraps “every man would say the world is his friend.” A slightly too loud denouement precedes the last high note which sails off like a milkweed pod. “What Kind of Fool Am I?” would be more welcome had it not followed “The Minister’s Cat.” (Bricusse) Wrench of mood is jarring. The former selection leads neatly into “The Joker” which is effective but for over done piano treatment-do we need to hear the instrument laugh? which diminishes dark shading.

Musical Director/Pianist Warren Helms has known Matthews since the latter was 14. The vocalist admits high school would’ve been rough without him. Charming stories about Matthews’ teenage casting ambitions are followed by an irrelevant anecdote about Helms. The collaborators’ duet of “You and Me” (with Henry Mancini) is jaunty and appealing.

Bridging patter is warm and personal. I would encourage Matthews to try another Musical Director at some point. Finesse of the two musicians doesn’t weigh in.

Coming Up for Stearns Matthews:

March 13: Me & The Gershtwins: Songs of George and Ira Gershwin