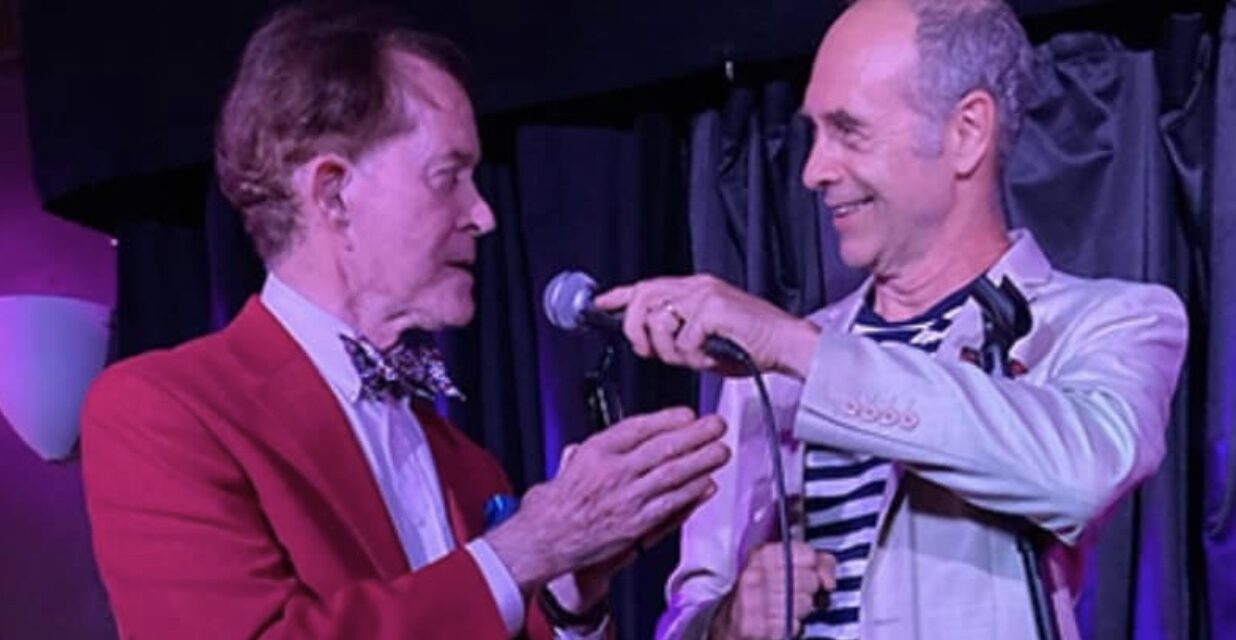 To celebrate La Fête Nationale (aka Bastille Day) in 2021, Jean Brassard, the Quebecois American performer and Steve Ross, The Crown Prince of Cabaret, performed Allons Enfants! (Let’s Go, Kids!) to a success so extraordinaire that they decided to do it again. This year’s Allons Enfants served up another celebration, an Encore une fois!, making it a three-day grand tour of the delightful music of France. With witty banter, sometime duets and songs sung wholly or partially in French and English, the pair gifted a rapt audience with 90 minutes of happiness that could only scratch the surface of the riches of the great French Songbook.

The opener, a pianistic overture of “Piano pour Piaf” by Ross, was followed by Brassard’s rendition of Jacque Brel’s “La Valse a Mille Temps” (Waltz in a Thousand Beats). With mastery of its rising arc of speed and intensity, this tour de force promised many more musical bon-bon ahead. The pair didn’t disappoint. From the outset, Ross’s lush and lyrical piano style carried through, as did Brassard’s vocal flexibility and animated, energetic interpretive skills.

And what is it about French music? From musette to chanson to the cabaret style of Piaf and other modern songwriters and performers, the beat is often uptempo even if sometimes the lyric is tragique. But at the heart of most French tunes is storytelling, an art that guest performer, Karen Akers has mastered with increasing gravitas in her career. Her setup and rendition of “L’Accordioniste” (Michel Elmer), made famous by Edith Piaf, was breathtaking. The song also featured some backup by Brassard on, what else, the accordion. Another guest, Greta, known as a French Chanteuse, and an international veteran of the stage, clubs and  concert halls, offered a majestic interpretation of “Comment te dire adieu” (It Hurts to Say Goodbye by Arnold Goland). Purely American, “The Last Time I Saw Paris” (Jerome Kern, Oscar Hammerstein II), sung by Ross, emotively related the sad tale of the lyricist’s 1941 au revoir to The City of Lights on the threshold of the Nazi occupation during World War II.

What would a tournée de la musique française be without a hearty hat-tip to a composer well known to many Americans, Michel Legrand (who passed in 2019). “Watch What Happens” (lyric by Norman Gimbel), “The Windmills of Your Mind” (lyrics by Alan and Marilyn Bergman)  and “I Will Wait for You” were delightful renditions of familiar music. Also familiar to many Americans is the music of prolific French singer-songwriter, Charles Trenet. Of his 1,000-song output, Brassard produced his harmonica and accordion for “La Mer” (Beyond the Sea), “I Wish You Love” (Que reste-t-il de nos amours?) and the fun “Boom” (Boum) with a Trenet hallmark of onomatopoeic lyrics.

Other prime offerings included Brassard’s costumed (a la Marcel Marceau’s “Bip”) sad love for “Madeleine” (Jaques Brel) and the hit made famous by Elvis Presley, “Can’t Help Falling in Love” (Hugo Peretti, Luigi Creatore, George David Weiss), based on “Plaisir d’amour,” a popular love song composed by Jean-Paul Égide Martini in 1874. Closing a rich concert of many moods and genres, the darling of Parisian Café Society in the 1920s, Cole Porter, was tapped for “Can Can,” written in 1953 for the musical of the same name. Its very many choruses are fun and witty, suggesting “There is no trick to a can-can, It is so simple to do…” After a litany of those who can, increasingly silly, the song ends with “If a hippo with a splash can, If an elm and an oak and an ash can, Baby, you can can-can too.”

Going out on a finis of la gaieté, if Allons Enfants—Encore une autre fois! comes to pass in 2023, it’s not to be missed!