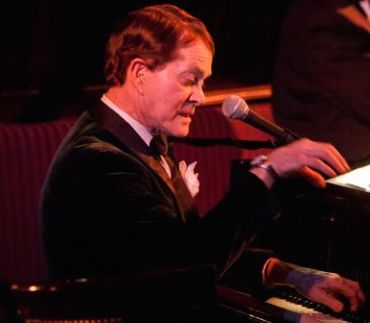 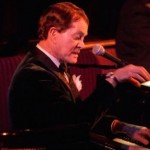 Still the “Crown Prince of Cabaret,” Steve Ross debuted on St. Patrick’s Day at Birdland, “the jazz corner of the world.”  With a salute to Cole Porter, that dapper aristocrat of song, he packed the house with Ross fans, Porterphiles and cabaret literati and proved that after 54 years in the biz, he is better than ever. 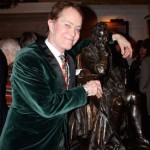 Ross was trim and dapper in a deep green velvet smoking jacket.  This was not so much a nod to the patron saint of the Emerald Isle as the fact that the jacket, courtesy of the Noel Coward Society, had once belonged to Noel Coward.  Fitting into the Coward vein, Ross sang “I’ve Got You Under My Skin,” and mentioned that after Coward visited a Swiss clinic for cosmetic sheep gland injections and was asked how he felt, Coward replied, “I’ve got ewe under my skin.”

This show was all Cole Porter, the mix of witty images with passion of “Let’s Do It,”  the beautifully crafted “After You, Who?” (from Gay Divorce) and familiar tunes like “Night and Day” from the same show.  Some less well-known included a tune Porter wrote in 1909, while a freshman at Yale, “When the Summer Moon Comes ‘Long,” already hinting at his breezy elegance.

He was accompanied on ukelele by special guest, Klea Blackhurst, famed for her Ethel Merman pipes.  She later performed a song of disillusion from Panama Hattie, “Make it Another Old Fashioned, Please.”

Porter’s full-blown sophistication was evidenced in a romantic travelogue beginning with the soaring “Ridin’ High,” to wallowing “Down In the Depths (on the 90th floor),” a torch song with ardent lines like “I’m deserted and depressed/ In my regal eagle nest.”  (Both were from Red, Hot and Blue!).  The triptych wound up with Jubilee’s insouciant “Just One of those Things.”

From the vast Porter songbook, Ross included the high-flying Paris years in a medley including one of the favorite list songs, “Can-Can.”  His encore included another list song, “Let’s Do It.”  The second city salute went, of course, to Manhattan and after his outstanding rendition of the plaintive “Ev’ry Time We Say Goodbye,” Ross decided on “Take Me Back to Manhattan,” a tune Porter apparently dashed off while killing time in Philadelphia during try-outs of The New Yorkers.  From that show, Ross also sang, “I Happen to Like New York,” catchy with its triple rhymes.

There is no danger of missing even the most racing, twisted Porter lyrics and rhymes since Ross sings with crystalline preciseness, placing stress on especially witty or revealing words.  “Anything Goes” was a master class in delivery.  Ross is a master class himself on Cole Porter and every other eloquent songwriter.  His knowledge of the canon is authoritative and his piano accompaniment is vivid and determined.

Birdland is a “de-lovely” venue for Steve Ross and in this Cole Porter performance; he was “Ridin’ High” and so was his audience.

March 17.  Broadway at Birdland.  Steve Ross was accompanied by Steve Doyle on bass.   www.BirdlandJazz.com  For more information and reservations call 212-581-3080.