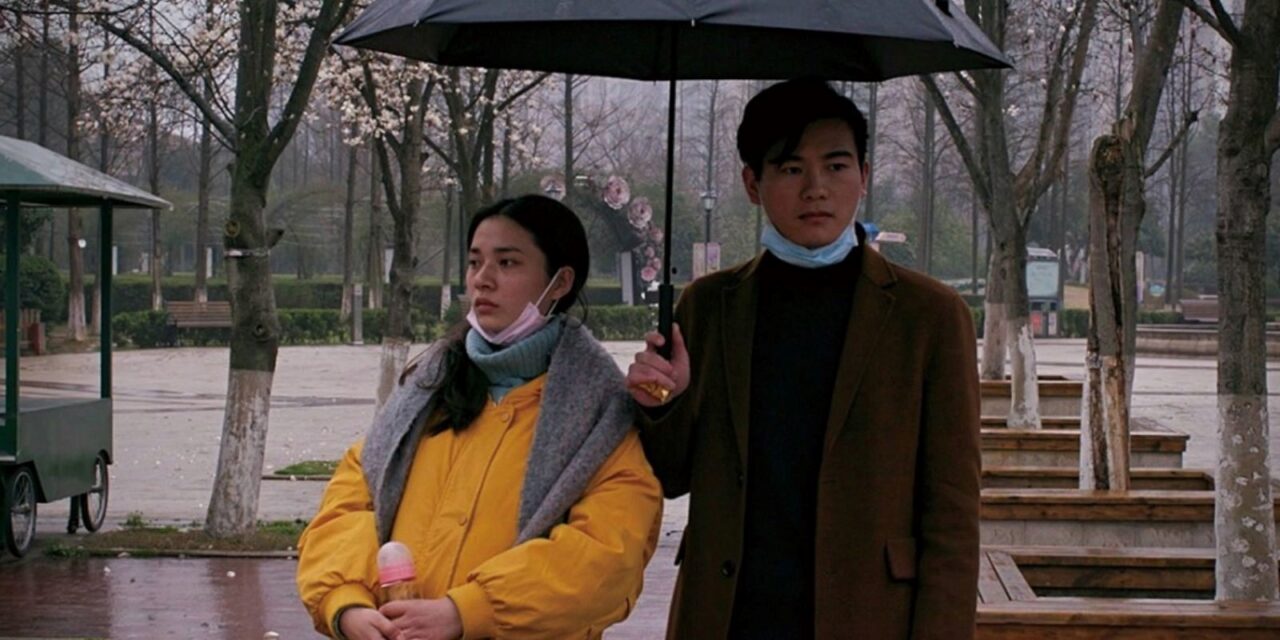 Directors Huang Ji and Otsuka Ryuji, a husband-and-wife team from Beijing, China, are known for creating films about families who must give up unity and togetherness to find substantial work in modern China. Stonewalling is another of their films that explores the lives of young people in China. Their protagonist Lynn (Honggui Yao) is a twentysomething who can’t seem to settle into a career that she finds fulfilling. As the film unspools, directors examine her alienation, sense of displacement and lethargy as she attempts to find and define herself.

The directors introduce us to Lynn as a college student, a flight-attendant-in-training, living with her boyfriend. A paternalist, who enjoys telling her the best course of action for her life, he pushes her to continue with her career, regardless of whether Lynn likes or is suited to it.

For her part Lynn is unphased with her studies and only half-interested in what her boyfriend suggests. Honggui Yao’s Lynn is dispirited and seems as if she’s barely walking through life. She lacks the ambition that her boyfriend manifests and is reticent and resistant to his urgings to move her life along and stop “stonewalling.”

When she finds herself pregnant, and eventually tells him, he urges her to have an abortion. It is an action acceptable in China because of the former one-child policy, completely rescinded in 2021. Not wanting to fall into the subservient woman role with her boyfriend, she indicates that she might want to keep the baby. He suggests that the baby will interfere with her career plans and make it difficult for her to be pregnant and raise a child as she finishes her education.

Interestingly, the directors portray Lynn as a passive-aggressive, who allows life to wash over her. Ironically, waiting and doing nothing is a decision. She visits her mother for help and perhaps emotional support. Her mother is more entranced with maintaining her medical clinic and making money on the side. Her mother gives “how to” consulting sessions selling Vital Crème, a product that is cleverly used in a pyramid scheme. Her relationship with her mother is transactional, as it is with the rest of her family. Lynn is emotionally adrift, and the directors mirror her flatlined state in the mood and tone of the film, which, at times and on purpose, seems like a documentary

Making a surprising move, Lynn decides to give up her ambition to be a flight attendant and bring her baby to term. Afterward, she will put the baby up for adoption and face that circumstance when she’s ready. Uninvolved, her boyfriend is away on modeling jobs and party hosting gigs to make money. Lynn’s choice to allow her pregnancy leads her on a difficult and tiresome path. Her boyfriend paid for her education; but she intends to give back the money to him. To do this she must work a series of dead-end jobs and deal with her pregnancy without his help. However, she will be independent of him.

The directors have created a powerful, well-delineated character in Lynn who, in her indecision about her life, actually takes charge and moves away from others who would control her. By selecting the long sequences without camera breaks, the use of flat lighting and sterile environments with random clutter, the directors have featured elements which contribute to making the film intensely realistic. Cinematically, they suggest that stasis is an unending fact of Lynn’s life. Their choices enhance Lynn as a symbol of young women in China’s modern-day social structure.

Yet, unlike other young women, Lynn’s laissez-faire approach does not mirror the ethic of “getting ahead.” She has the baby, but wants to give it up for adoption, a surprising choice that reveals the beginning of self-determination, apart from the robotic actions of the prosperity-seekers. In this act she expresses her individuality. There is also the sense that she has backed herself in her own corner and will suffer until she discovers her identity.

Clearly, the directors reveal through the portrait of Lynn that the younger generation needs the wisdom of their elders from a distant past, currently absent in their lives. The cultural shift from the past has been overtaken by materialism and cultural modernization. As all jump on the bandwagon to make money and show themselves prosperous consumers, much is lost. Without guidance and care, Lynn and others are buffeted about, having to compromise situations that they find themselves in haphazardly, searching for a happiness that may never come.

The excellent Honggui Yao gives an authentic, believable performance. As Lynn becomes increasingly querulous with where she finds herself, we wonder if things will ever improve. Indeed, she may keep the baby, rather than fulfill what she told her boyfriend. Without many options in a culture and society that emphasizes progress and “moving forward,” regardless of emotional satisfaction, a criticism that the directors continually underscore, Lynn traps herself. She is a victim of her own ability to lay back and not extricate herself from her aimlessness. In stonewalling, she is stonewalled.

For tickets to this intriguing film go to the NYFF60 website: www.filmlinc.org/nyff2022/films/stonewalling/