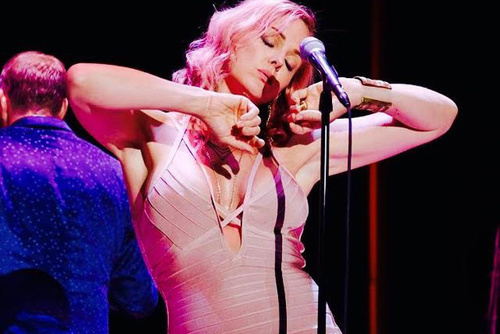 The last time I saw this artist, she was singing classic, American Songbook in a Michael Feinstein show. Tonight we see Large with her own band: James Beaton (piano), Scott Weddie (guitar), Matt Brown (bass), and her brother Greg Eklund (drums). To say the lady is up-front-and-personal would be minimizing gregarious charisma. She’s sharp, funny, smart, and provocative. Had she less talent, trappings might be clocked as “misdirection” (a magic term, in which the attention of an audience is focused on one thing in order to distract its attention from another). As it is, she delivers in spades.

“This is a song you all know well. You’ll understand why Neil Sedaka said I was sacrilegious” introduces a completely original, teasingly juicy rendition of Cole Porter’s “(I’ve Got You) Under My Skin.” Just read the lyrics, she advises. Riding an almost new, dark, rolling melody, Large interprets the lyric as sultry and suggestive with a hard backbeat. Weddle and Brown offer savory vocal back-up. Next comes Porter’s “It’s All Right With Me” which emerges as sheer rockabilly. The material works. Honestly. And I’m usually a purist. “2000 Miles” (Chrissie Hynde) describes consequences of the performer’s being on the road two thirds of the year. “The children will sing/He’ll be back at Christmas time . . . “ Also rockabilly, it aches with yearning. Step, bump, step, bump, bend, sinuous swivel . . . Large’s pure, sometimes husky alto escapes from that open throat as if deployed. Songs in French and Spanish (the latter buoyed by requested tequila “because it makes me friendlier and a better dancer”) make one want to move. “It’s the last night of our tour,” she explains.

A brief parody of “I’ll Be Home for Christmas” in duet with Michael Feinstein, suggests Christmas Eve will find her in a Queens drunk tank, to which he responds, “Christmas Eve will find me far away  . . . I’m a Jew” —rhymes with you. This not only falls flat, but is a missed opportunity to deliver a single, pristine, holiday ballad or something wry.

Between numbers, Large pivots between using street language to (sincerely) urge social responsibility/ brotherhood/optimism (“I call myself an “agnoptimist”) and telling personal stories in a syntax I can’t print here. Ask someone how to slow-zip yourself a drink. It’s priceless. The audience hoots encouragement. Another original, “Stand Up for Me” is “a love song to humans from love” written about marriage equality: “Stand up for me/And I’ll stand beside you/I’m the light that guides you/Far inside you . . . ” Large’s eyes close, as do those of her back-up musicians. She’s almost still for perhaps the first time, one hand behind her back. The prayer settles gently despite fervor. Large never overshoots.

“Somebody to Love” (Freddie Mercury) breaks the mood with an irresistible foray into the audience. She struts, undulates across the back of the club, wiggles between tables, settles in laps, leans in close, strokes men, hugs women, whips her halo of hair. Holding the microphone like a tipped goblet, Large sings a verse then extends it to us for the collective, parroted, “Somebody!/Find me somebody to love!” Heads spin. We’re riveted. Many reach, wanting a piece of this formidable, take-no-prisoners woman.

When the crowd won’t let her go, she detonates “My Vagina is Eight Miles Wide” (Storm Large) “for all us girls who don’t fit in.” Most of those in attendance know the song well enough to join. Look it up. In fact, YouTube it.

Wowza. Take any opportunity to see Storm Large, especially with her band. The woman throws a savvy, pugnacious shindig you won’t soon forget.