Straight – a Love Triangle That Won’t Come Out 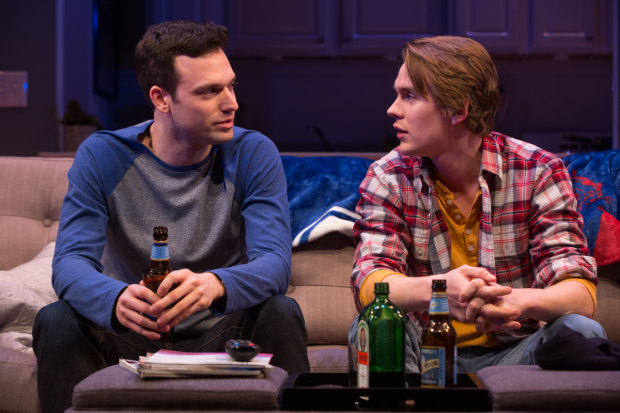 In Scott Elmegreen and Drew Fornarola’s Straight, we find out that “Not every gay guy burps, like, glitter,” which is certainly true, but not exactly new information, at least to a New York City audience. Ben (Jake Epstein), a 26 year-old (though by how often he’s teased for being old in this play, you’d think he’d be at least forty) investment banker with the perfect Ph.D.- candidate girlfriend and action figures decorating his otherwise sterile apartment, decides to mix it up by meeting Chris (Thomas E. Sullivan), a 20 year-old college student on a hookup app. They’re both closeted with everyone else apart from each other, and quickly bond on a deeper level that’s more than just physical. Soon enough Ben is living the ultimate double life, falling deeper into lies with Emily (the girlfriend, Jenna Gavigan) as he postpones and almost extinguishes the possibility of them moving in together while Chris regularly spends the night at his apartment. The cause of all these lies? Shame, and fear of being stereotyped as “the gay one” for the rest of his life.

The best-written character is Chris, who functions behind a wall of wit and sarcasm that fades away and leaves us with a vulnerable young man who has fallen deeply in love. His arc is clear and entertaining, and Sullivan pulls off a multidimensional performance that begs the other two characters to have been developed enough for Epstein and Gavigan to be able to show their best chops. Ben and Emily are underdeveloped – we know little to nothing of Ben’s upbringing, and though there are attempts to show Emily as a strong female character who works hard in a competitive field, they’re contradicted when we see her beg Ben not to break up with her after he doesn’t reciprocate her desire to live together – she’s been painted as smart enough to call it quits just based off that alone, but instead she pleads with him, and it’s confusing and doesn’t match how she’s been set up for us. 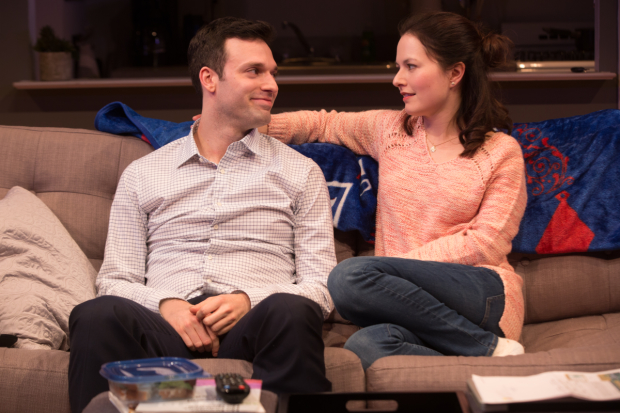 The play’s most significant weakness is that Ben’s internal struggle is neither believable nor relevant as this is present-day Boston, not some small, conservative town. Epstein does the best he can with an underwritten part and a central conflict that doesn’t seem justified considering the otherwise accepting world Elmegreen and Fornarola have constructed for us – he even specifies that Massachusetts was the first state to legalize gay marriage. Not wanting to be seen as gay, nothing else is absolutely a valid reason for having a hard time coming out, but knowing Ben’s circumstances; well-educated, in a liberal city, seemingly no homophobic family or friends in his life . . . it’s hard to believe that the fear of a label is what drives him into drawing out this lie further and further to protect. . .who? Himself? Emily, someone who he still loves and respects, but who seems perfectly capable of grieving a breakup and then moving on?

Director Andy Sandberg tries to keep the pace moving, but Elmegreen and Fornarola’s long, mostly two -person scenes, that revolve around a couch, make it difficult. The ending is a twist that feels abrupt and un-earned, though perhaps with an intermission and a more developed second act, its consequences might be further explored and head into interesting territory that could keep Straight from feeling so dated (the choice to keep Gavigan in rotating turtlenecks doesn’t help). Straight might have felt topical 30 years ago, but in 2016 feels as though it was written in a wildly different reality.
Straight – Running through May 8 at the Acorn at Theater Row, 410 W. 42nd St.