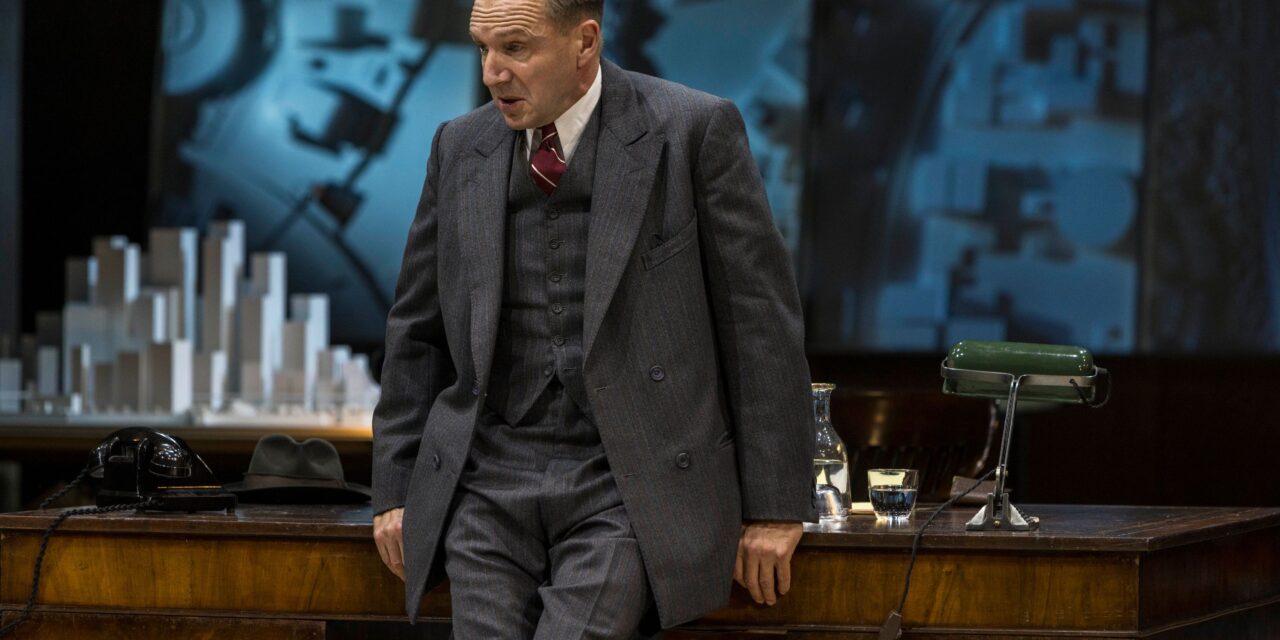 The man. The myth. The legend. Few personalities have garnered as much attention – as well as heated debate — over the past 50 years than the famed New York urban planner Robert Moses, who has been the subject of a 1,300-page tome, Robert Caro’s “The Power Broker,” as well as at least two Off-Broadway plays. A man who not only did both good (creating the New York State Park system) and evil (creating the Cross Bronx Expressway), Moses also personified these dichotomies in his professional and personal life, making him an irresistible subject for any dramatist.

So, it’s not surprising the legendary British playwright David Hare jumped at the chance to plumb Moses’ life, which he does with considerable skill in Straight Line Crazy, which has now landed at The Shed for a limited run. While it’s far from perfect – it drags at 2 ½ hours and is a bit heavy on exposition and oversimplification – the play is often as fascinating as its protagonist.

Even better, the work provides a stellar vehicle for Ralph Fiennes, who serves up a towering, fiercely committed performance in the central role. Yes, it might have been better had Fiennes not concentrated so hard on maintaining a strange New York accent he doesn’t hold onto or scrunched up his face so often; if I didn’t know better, I might have thought I was watching a bioplay about Richard Nixon.

Yet, like Nixon, Moses was a megalomaniac with an unquenching thirst for power and a need to be always right — and Fiennes fully embraces these traits, never asking for the audience’s (or anyone’s) sympathy even in his most hateful moments. More importantly, much like Nixon, he cared about his family; while he may have driven his wife Mary to alcoholism and insanity, there’s no doubt he loved her.

Rather than taking on a truly episodic structure, Hare smartly chooses to fictionalize two pivotal time periods in Moses’ life: The first, in 1926, is when Moses insists on creating Jones Beach and building the Northern State and Southern State Parkways to “free up” Long Island for the masses (provided they can travel by car). In doing so, though, he alienates everyone from the wealthy Henry Vanderbilt (a deliciously patrician Guy Paul) to his own biggest supporter, the feisty governor Al Smith (a scene-stealing Danny Webb), who needs Moses as much as Moses needs him.

During this sequence, which takes up the entire first act of Nicholas Hynter and Jamie Armitage’s rather too-presentational production, we also come to meet some of the other personalities who figure most prominently in the work. Two of them are fictional: his office associates, the outspoken if adoring Finnuala Connell (brilliantly embodied by Judith Roddy) and the steadfast Ariel Porter (a very fine Adam Silver), both of whom continue to work for Moses for decades despite some moral qualms over Moses’ behavior.

The third is the famed activist Jane Jacobs (Helen Schlesinger, overdoing the sarcasm), who would lead the charge against Moses’ plan to put in a four-lane highway through Washington Square, which would prove to be his undoing. In an odd choice, she comes on an occasional commentator to the audience to the first act, as if Hare (who admittedly wrote this work for British theatergoers not Americans) was afraid we’d be disappointed if we had to wait until Act 2 to meet her.

Even more strangely, Jacobs ultimately has less to do than one might imagine in the second act, set in 1955 at the height of the Washington Square controversy. It’s true she never actually met Moses (which may be Hare’s rationale), but it was her conviction that both the needs of people and the organic growth of cities were paramount to any sort of “urban planning,” which is the major philosophical debate inherent in the play. Yet, she barely registers as a character, never mind an antagonist.

Instead, the second act is primarily concerned with Moses’ interactions with new employee Mariah Heller (a superb Alisha Bailey), a self-possessed and highly educated black woman who comes to work for Moses even though her family was negatively impacted by the construction of the Cross-Bronx Expressway. Hare quickly makes it crystal-clear that Moses not only despises Heller for intellectually challenging him (which he tolerates from Finnuala) but, above all, for the color of her skin.

In the end, Hare exposes Moses as a classist and a racist, which explains in large part why his projects only involved the building of roads (since rich white folks could afford cars) and blatantly ignored mass transit. Still, even faced with the truth clearly laid out on a floor map (part of Bob Crowley’s simple but effective set), Moses neither accepts this conclusion, nor sees his own motivations clearly. Was he “straight line crazy” or just “crazy?” The answer, as ever, remains unclear.