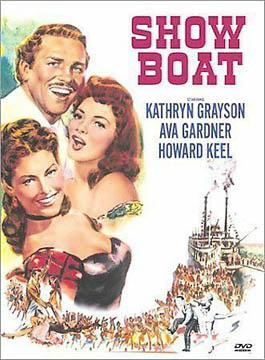 Showboat  1929- filmed as a partial talkie, then reshot in 1936 Directed by James Whale. With Irene Dunne, Allan Jones, Charles Winninger, Paul Robeson, Helen Morgan. Available to purchase, not to stream.

Showboat 1951 Based on the novel by Edna Ferber, the 1927 Broadway production and earlier film versions. Music and Lyrics by Jerome Kern/Oscar Hammerstein II. Directed by George Sidney. The company of an entertainment riverboat fall in and out of love coping with social judgment and tradition. Leading actors Julie La Verne (Ava Gardner) and Steve Baker (Robert Sterling) are married. When she rejects a advances made by the boat’s engineer, he reveals to a local sheriff that Julie is part negro. Interracial marriage is against the law. The couple are forced to leave a secure and familial job.

Gambler, Gaylord Ravenal (Howard Keel) is smitten with Captain Andy’s (Joe. E. Brown) young daughter Magnolia (Kathryn Grayson.) Stepping into Julie and Steve’s musical roles, the couple are popular, cement their relationship, and against parental wishes, marry. After a time, they too leave, wanting to make a life on land. Both marriages are torn apart.  One eventually gets back together helped by a personal sacrifice. Melodrama. Lush music. Characters are younger in the film than the show, quite a bit of dialogue was changed, what was felt were irrelevant comedy scenes were cut, and interracial scenes sanitized. Rent on Amazon Prime 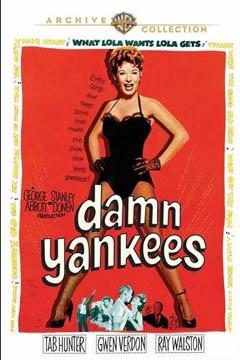 Damn Yankees 1958 Based on the Broadway Musical by Richard Adler and Jerry Ross. Directed by George Abbott (as was the stage show), assisted by Stanley Donan. A modern  take on the Faust legend. Middle-aged Joe Boyd (Robert Shafer), an avid Washington Senators Baseball fan, declares he’d sell his soul to the devil to see his team win. Lucifer, called  Applegate (Ray Walston, perfect), instantly appears offering a bargain: He’ll make Joe young again so he can win the pennant for the team. Joe agrees, but insists on an escape clause. He reluctantly leaves his wife.

Under the name Joe Hardy (Tab Hunter), he’s introduced to the flailing Senators with Applegate acting as his agent. The young man is a great ballplayer, leading his team toward the season win. He rents a room from his sad, unsuspecting wife. Hedging bets, Applegate sends seductress Lola (Gwen Verdon- hooray!) to put a lock on Joe’s soul. The provocative “Whatever Lola Wants” was toned down for the film. Instead, both under Applegate’s thumb, the two commiserate. With a little help, Joe manages both to win and extricate himself. Entertaining. Rent on Amazon Prime. 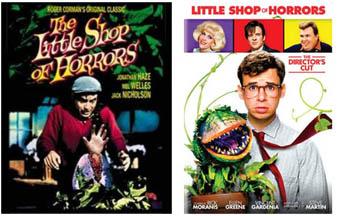 The Little Shop of Horrors 1960 Non-musical. Directed by Roger Corman. See the story’s essence, stripped down and delightful. Free with Amazon Prime

The Little Shop of Horrors 1986 Based on the earlier film. Music & Lyrics by Alan Menken and Howard Ashman. Directed by Frank Oz, who also restructured the script.  Dorky Seymour Krelborn (Rick Moranis) does menial chores at Mushnik’s Flower Shop on Skid Row. Secretly carrying a torch for innocent co-worker Audrey (Ellen Greene), he’s helpless in the face of her abuse by sadistic boyfriend, Orin Scrivello, DDS (Steve Martin-excels). One night, Seymour finds an unidentifiable, abandoned plant, names it Audrey II, and nurses it back to health. He accidently discovers the plant thrives on blood by pricking his finger, then continues to bleed himself.

The plant becomes enormous, attracting notoriety and business, but is now vocally insisting to be fed more and more frequently.” She” suggests her caregiver kill in exchange for fame and fortune. At first appalled, Seymour thinks getting rid of Orin might justify murder… Of course, that’s just the beginning. Perversely, the plant wins. A trio of stoop-sitting Motown singers winds through the piece giving it attitude. The plant is NOT CGI. Fun. Free with Amazon Prime 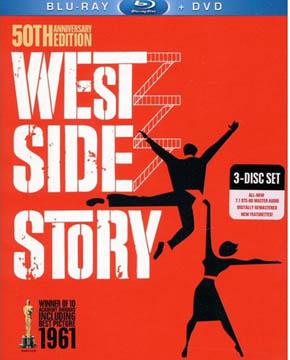 You know the story. Volatile American and Puerto Rican gangs, the Jets, lead by Riff (Russ Tamblyn), and Sharks, lead by Bernardo (George Chakiris), agree to rumble. Tony (Richard Beymer), who co-founded the Jets, has stepped away and gotten a job. Hoping to talk them out of it or at least temper the situation, he agrees to negotiate terms at a local dance. There he sees Bernardo’s sister, Maria (Natalie Wood.) It’s love at first sight.

When Maria insists he stop the rumble, Tony confronts both gangs. Tragedy occurs. Elvis Presley was approached to play Tony (?!), but his manager turned down the role. Broadway’s Maria, Carol Lawrence was thought to be too old. Much beautiful music, though Sondheim went on to create better lyrics. Great cinematography. Filmed in tenements where Lincoln Center now stands. We await Steven Spielberg’s version with baited breath. Rent on Amazon Prime or Netflix 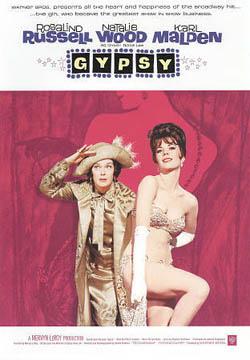 Gypsy 1961 based on the stage musical adapted from Gypsy: A Memoir by Gypsy Rose Lee. Music and Lyrics, Jule Styne and Stephen Sondheim. Directed by Mervyn LeRoy. Stage mother Rose Hovick (Rosalind Russell) will do anything to make her daughter June (Suzanne Cupito, then Ann Jillian) a star on the vaudeville circuit, while less talented daughter Louise is dragged along in the chorus of every show. Then, June elopes. With the help of smitten manager, Herbie Sommers (Karl Malden), Rose directs her high beam energy to Louise.

At a rundown burlesque house in Kansas where Louise’s clean performance is meant to keep away cops, Rose volunteers her daughter to step in for an absent stripper. Herbie realizes

Rose will do anything to push Louise forward and will never commit to him. He leaves. Louise (Gypsy Rose Lee) never takes it all off, but a unique blend of come-on and class gradually makes her a star. She finally confronts her mother. Cue 11 o’clock number. Reconciliation. Russell’s gravelly singing voice was blended with that of contralto, Lisa Kirk, while unlike West Side Story, Natalie Wood sang her own songs.  Good score. Russell and Malden are swell. Rent on Amazon Prime 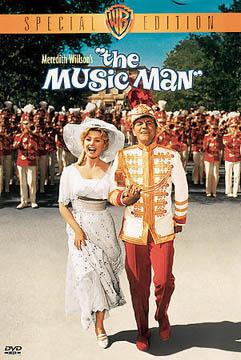 The Music Man 1962 Based on the Broadway musical by Meredith Wilson. Produced and Directed by Morton DaCosta who also directed on stage. 1912. Travelling salesman, “Professor” Harold Hill (Robert Preston), arrives in River City, Iowa and cons the town into buying musical instruments and uniforms for their kids to form a band- rather than be corrupted by the local pool hall. As money pours in, he attempts to seduce distrustful local librarian, Marian Paroo (Shirley Jones). He wins over her shy, little brother Winthrop           (Ron Howard, yes, that Ron Howard) but the lady is an uphill climb. Also out to discredit him is mayor Shinn (Paul Ford.)

The instruments arrive. Pressed into demonstration, Hill leads the untutored kids utilizing “The Think Method.” They sound terrible, but parents are enthralled. The hero finds himself packed, but hesitant to leave. Marian, who has discovered Harold’s gambit, is now in love and defends him for bringing the town together. Cue big production number in which the kids march and play like virtuosos. Bing Crosby and Cary Grant turned down the role of Harold Hill. Uncomplicated, unadulterated fun. Rent on Amazon Prime 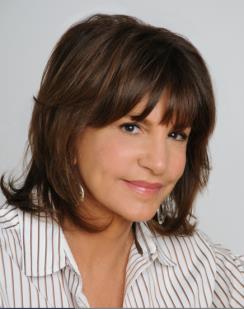 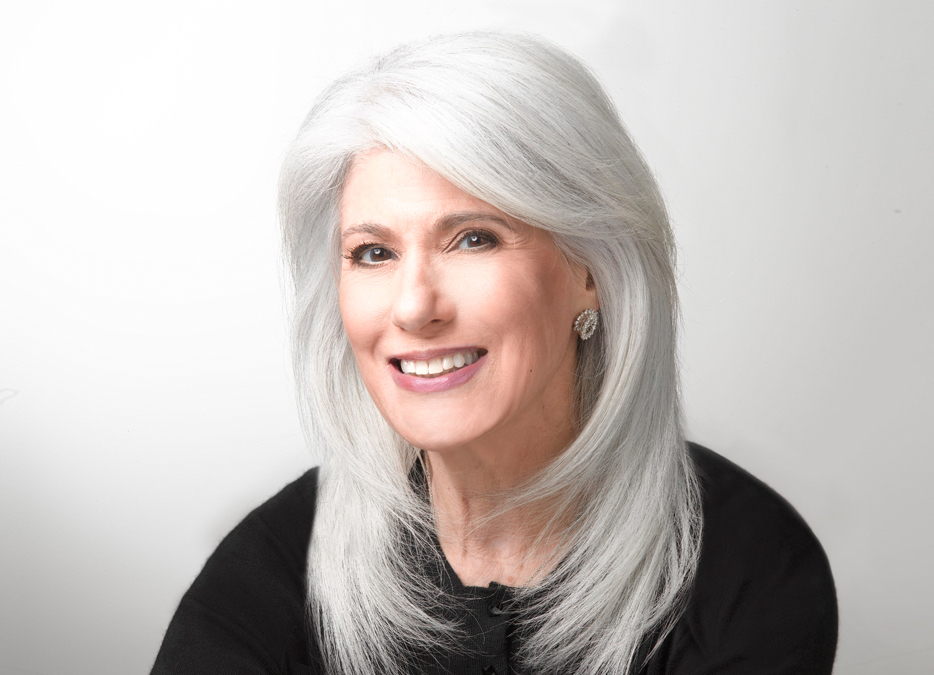 TheaterPizzazz gets a Nod from Crain’s NY