Sugar Sing Along Loses the Beat 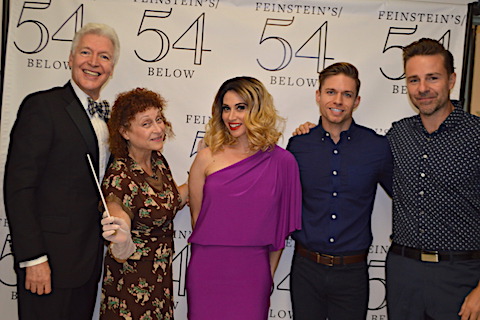 Tony Roberts, one of the original stars of Sugar, the 1972 Broadway musical based entirely on the Billy Wilder, cross-dressing, Prohibition-era comedy film Some Like It Hot, hosted the “54 Sings Sugar” chapter of the 54 Below series of barely-staged, sung-through performances of sometimes rarely seen musicals. Roberts filled in plot details, occasionally read lines of an uncast character, and served as intermission entertainment, telling stories from his original Broadway run and fielding questions from the audience. Time with this gentleman of the theater was deeply appreciated and the main charm of this evening’s run through of an old-fashioned musical score. The Billy Wilder-helmed 1959 film serves as the plot of the musical. Two hapless marginally employed musicians Jerry (Jack Lemmon) and Joe (Tony Curtis) stumble upon the St. Valentine’s Day massacre in Prohibition era Chicago, and get out of town by taking the only available gig – with an all-women dance band on its way to a job in Florida. The men cross dress their way into the job (Joe becomes Josephine and Jerry becomes Daphne), within a plot that is timebound within the gender politics of midcentury America. Audiences found funny the sight of heterosexual men in drag stumbling in heels then empathizing with the women they objectify, while the real drama involved guns and gangsters in pursuit of the undercover musicians. The band’s featured vocalist Sugar (Marilyn Monroe) is the romantic interest for Joe while he’s in drag – providing a plot revisited in Tootsie (1982) where a man in drag is smitten with a girlfriend who is unaware that there are romantic feelings in the room. Daphne attracts the attention of a rich Osgood Fielding Jr. who proposes, and they resolve with “nobody’s perfect” (some of the best final comedy lines ever) to marry anyway, someone balancing the fact that Jerry-Daphne likes him but not “that way” with the desire for companionship. We laugh and don’t think deeply. The delicacy and wit of the delivery of the content rather than the plot itself makes the original film a classic. This musical based on the original would rely on this same deft directorial and performance touch. Yes, “54 Sings” is barebones by design, and in this case that framework highlighted the limitations of the 1972 musical. Several of the performers give stalwart and occasionally moving performances, especially Hunter Ryan Herdlicka as Jerry, Matt Hetherington as Joe, and Tony Sheldon as Fielding who falls for Joe-as-Josephine.

The tunes are conventional with a few memorable ballads – especially “It’s Always Love” as a solemn musing by Joe as Josephine when she’s hooked a rich man who doesn’t know what’s beneath her skirts, as it were. The evening’s musicians (Kristen Rosenfeld on piano, Teresa Payne on reeds, Amanda Ruzza on Bass, and Shirazette Tinnin on drums) sounded like they were stumbling through a sight reading. Leslie Margherita’s brassy on-stage persona is a tentative fit to the delicate and kinda clueless (simple-minded yet earnest) Sugar Kane, the star of the all-girl dance band. It should be noted that her rendition of the cut number “I’m Naïve” is a standout, in the manner of “Shy” in Once Upon a Mattress (belted by a character who is anything but shy). The “54 Sings” series continues its service to the theater community, giving voice to rarely revived chapters of American musical theater history. “54 Sings Sugar” presented an under-rehearsed view into a rarely revived cameo, capturing the transition of the stage musical from big dimensions to personal storytelling, from dancing chorus and singing chorus to streamlined Sondheim. These tunes are woven into an historical era that doesn’t hold up without a stalwart stage frame.