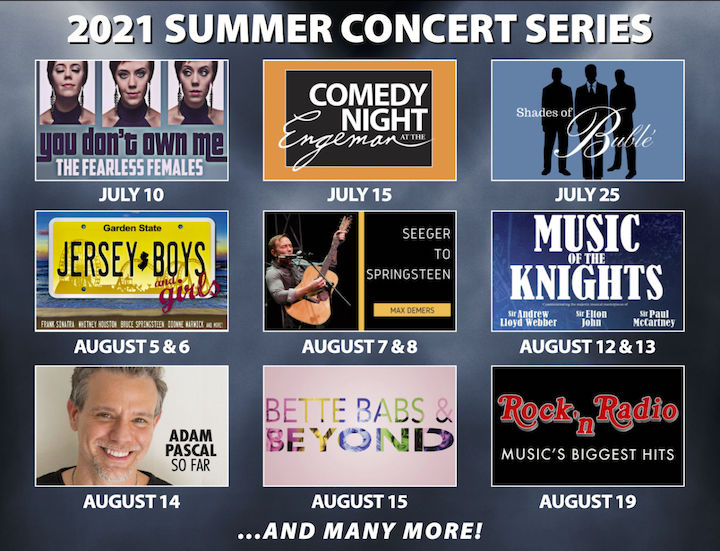 Tickets are now on sale for the 2021 Summer Concert Series, just a stone’s throw from Manhattan, at the John W. Engeman Theater at Northport.

Here’s some of the talent you’ll see:

Next up, Klea Blackhurst’s celebrated show pays homage to the greatest Broadway performer of all time: Ethel Merman in EVERYTHING THE TRAFFIC WILL ALLOW: A TRIBUTE TO ETHEL MERMAN. July 11 at 2:00 PM

From Garland to Gaga, from Stevie Nicks to Gloria Estefan, from Kristin Chenoweth to Edith Piaf, experience a triumphant evening of song as Broadway powerhouse Kelli Rabke celebrates legendary ladies who may have been short in height but tall in talent. TINY GIANTS: PETITE POWERHOUSES FROM GARLAND TO GAGA WITH KELLI RABKE. July 16 at 8:00 PM

Hitched in 2014, Broadway’s Kelli Barrett & Jarrod Spector present FUNNY HOW IT HAPPENS, an intimate look at the uncanny parallels and make-it-or-break-it moments throughout their careers features pop favorites and iconic songs from their Broadway musicals while offering an inside (and often hilarious) scoop on what life is really like as a married Broadway power couple. July 17 at 8:00 PM

A BAND CALLED HONALEE is a modern-day folk trio inspired by the legacy of Peter, Paul & Mary, and featuring the music of Bob Dylan, The Mamas & The Papas, The Byrds, Simon & Garfunkel, and others from the 1960s folk rock era. Their mission is to share this uniquely American music with new audiences, while rekindling the passion of life-long fans. July 22 at 8:00 PM

SEEGER TO SPRINGSTEEN will transport you back to the days when every song was a sing-along. Join Max and friends as they play favorites from Bob Dylan, Woody Guthrie, Willie Nelson, Johnny Cash, The Eagles, and more. This is the music you grew up with, and the music that will continue to inspire the world for generations to come. August 7 at 3:00 PM and 8:00 PM and August 8 at 2:00 PM

Sir Andrew Lloyd Webber, Sir Elton John and Sir Paul McCartney are not only knights — they also happen to be three of the most successful songwriters of all time. MUSIC OF THE KNIGHTS honors their lasting musical influence with songs like “Memory,” “Don’t Cry for Me, Argentina,” “The Phantom of the Opera,” “Circle of Life,” ” Your Song,” “Don’t Let the Sun Go Down on Me,” “Yesterday” and many more! August 12 and 13 at 8:00 PM

ADAM PASCAL: SO FAR. Join us for an evening of songs, stories, questions and answers in an intimate acoustic retrospective of the career of Adam Pascal, star of Broadway’s RENT,

YOU’VE GOT A FRIEND: MUSIC OF THE BRILL BUILDING. The Brill Building was home to songwriters Carole King, Neil Sedaka, Lieber & Stoller, Neil Diamond, and Barry Mann & Cynthia Weill among others. The songs they wrote changed the sound of popular music and became some of the most iconic songs of all time. “Breaking Up Is Hard to Do,” ”Will You Still Love Me Tomorrow,” “You’ve Lost That Lovin’ Feelin’” and “On Broadway” all came from the famed music factory. Multi-award winning vocalist Scott Coulter takes you on a journey into the music – and the stories – of the singers and the songs that defined a generation. August 21 at 3:00 PM and 8:00 PM

Jeremy Stolle is a current Phantom veteran with over a decade of experience wearing the mask. NO MORE TALK OF DARKNESS infuses Jeremy’s unparalleled voice and extensive musicianship to create the ultimate celebration and electrifying spectacle of the Broadway mega musical.  August 28 at 5:00 PM