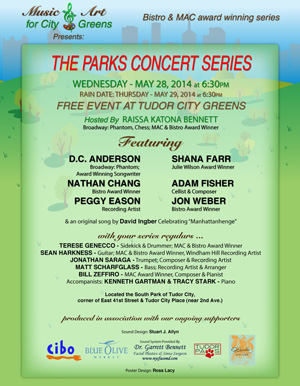 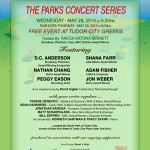 The 7th Season of The Parks Concert Series,(formerly The Concert for City Greens), a free outdoor concert series, commences on Wednesday, May 28th at 6:30 pm (Rain date: Thursday, May 29th at 6:30pm.) at Tudor City Greens, and will feature professional performers from Broadway and the New York City cabaret, jazz, classical and opera scene. All performers donate their time and talent for these concerts. The concert will be hosted by Tudor City resident, Broadway and cabaret veteran Raissa Katona Bennett.

This concert will also feature an original song written by DAVID INGBER and arranged by Broadway Musical Director (Kinky Boots/The Book of Mormon), BRIAN USIFER in celebration of MANHATTANHENGE.

Research shows that time spent in nature makes people healthier, happier and more creative, and that communities are safer where green spaces exist. In 2008, Raissa Katona Bennett had the idea to bring the world of cabaret, jazz, Broadway, and classical music to city green spaces as a way for diverse audiences to enjoy a free event and to broaden the appreciation of both of these amazing artists and the parks we so often take for granted.

Annually since then, hundreds of people who otherwise may never have experienced this cultural art form have enjoyed many nights of amazing music under the trees. “The Park Concert Series” (formerly known as the Concerts for City Greens) invites you to join us again this summer in the South Park at Tudor City on the selected dates listed below.