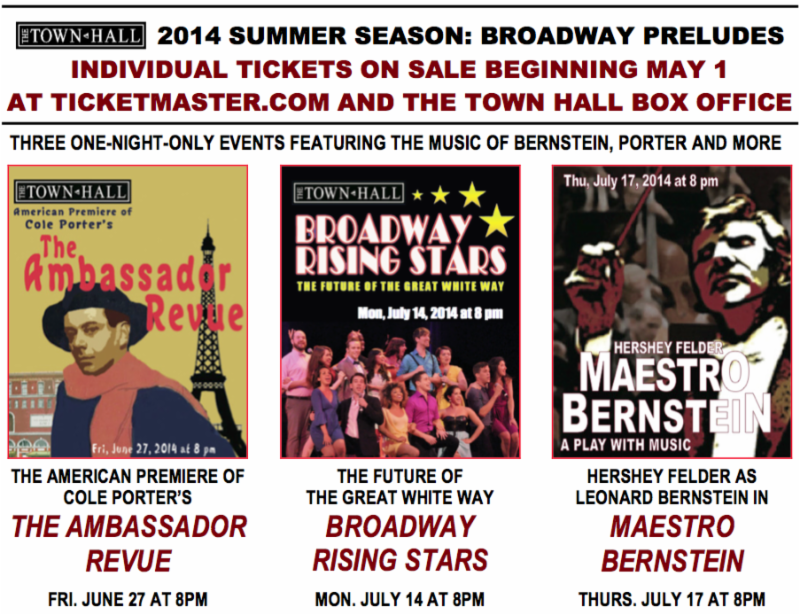 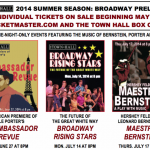 The Town Hall’s 2014 Summer Season features some fabulous one-night-only events with music from some of Broadway’s most beloved songwriters, critically acclaimed musical performers, and fresh-faced talent on the brink of discovery.

When the Jazz Age crossed over to France in the 20s, Cole Porter was in the middle of it. In 1928, he created a revue for the Café des Ambassadeur, Paris’s hottest night club, which became quite the sensation. Later that year, Porter had his first hit on Broadway and The Ambassador Revue fell into oblivion. The production boasts new arrangements by Grammy Award-winning bandleader Vince Giordano that mirror the original sounds of the late 1920s. He will be joined by vocalists, as well as a tap dance team and a ballroom dance couple, a line up similar to that of the original 1928 production.

In its annual show, Broadway Rising Stars, The Town Hall gives recent graduates from the nation’s leading performing arts schools a chance to showcase their talents and perform on the legendary stage. Many great classical artists began their career with a Town Hall debut. In keeping with that spirit of discovery, The Town Hall is committed to Broadway’s future and the idea of presenting talented newcomers to The Great White Way. The cast — which includes the brightest talent from AMDA, CAP 21, Circle in the Square, Juilliard, Marymount, The New School, NYU’s Steinhardt and Tisch, Pace University, and more — will perform over two dozen show tunes.

Thursday, July 17 at 8 pm
MAESTRO BERNSTEIN: A play with music
Written and performed by HERSHEY FELDER
Music and lyrics by LEONARD BERNSTEIN and others
Directed by Joel Zwick

Hershey Felder, critically acclaimed master entertainer and virtuoso pianist, brings one of America’s greatest musical legends to life in Maestro Bernstein. Conductor, composer, pianist, author, teacher, librettist, television star, and composer of West Side Story, Candide, On the Town, and Wonderful Town, Leonard Bernstein pushed all boundaries to become the world’s first serious musical media superstar. Felder combines first-person narrative with the compositions of Bernstein and others to draw us deeply into a fascinating life–a life filled with tragedy and triumph…and music.