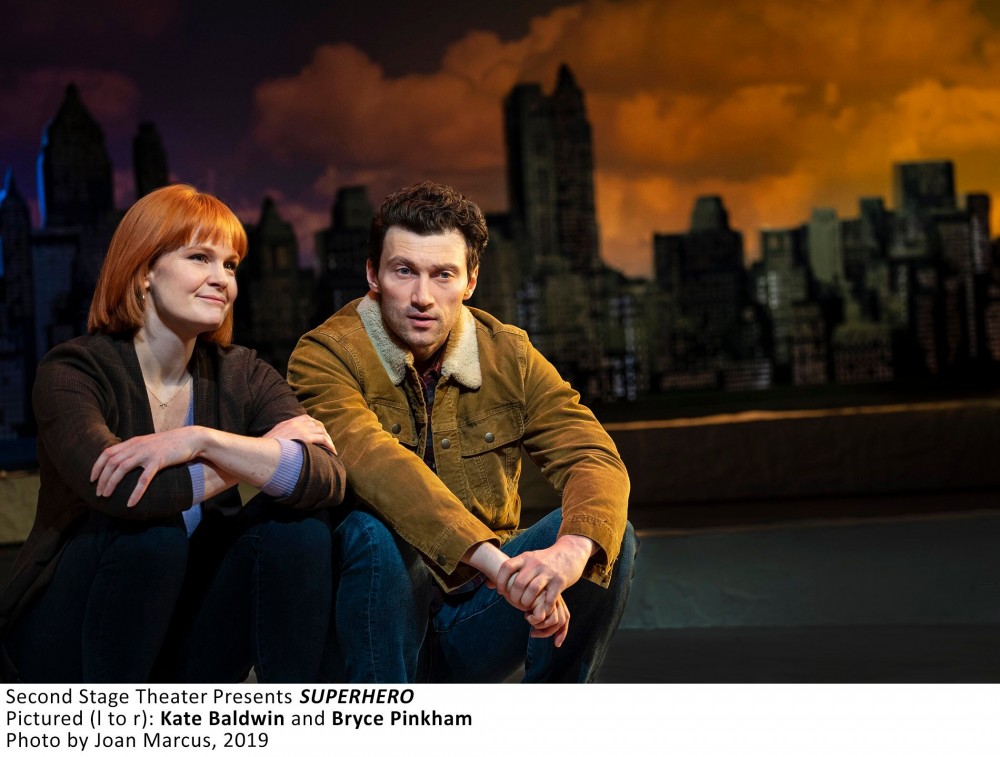 All too often, a musical starts with a rousing opening number, only to deflate by the second act or even the second song. Superhero, presented by 2ndStage at the Tony Kiser Theater, delivers a welcome, if imperfect, change of pace by traveling in the opposite direction.

Superhero begins with Simon (Kyle McArthur), a teenager whose father died in an accident two years earlier, perched on a fire escape, daydreaming in song about the amazing Sea Mariner, a superhero he’s created in his mind and the amateur comic books he’s penned. While the anthem establishes Simon’s obsession with superheroes, it’s not especially stirring or insightful. It stays on one note, both melodically and thematically (music and lyrics by Tom Kitt). It certainly doesn’t draw us into Simon’s world.

The song ends when Simon’s mom, Charlotte (the indomitable Kate Baldwin) enters, and a classic parent-child tug of war ensues. Simon, who witnessed his father’s death, is unable to talk about it, a constant bone of contention between mother and son. She thinks he needs to discuss his trauma so he can move on; he refuses to go there.

She sings about her struggle to raise her son without the husband she misses deeply, and the score takes its first baby steps toward climbing out of the opening number doldrums. Baldwin’s strong, clear voice sure doesn’t hurt, but the music itself gets stronger and more textured song by song throughout the first act. 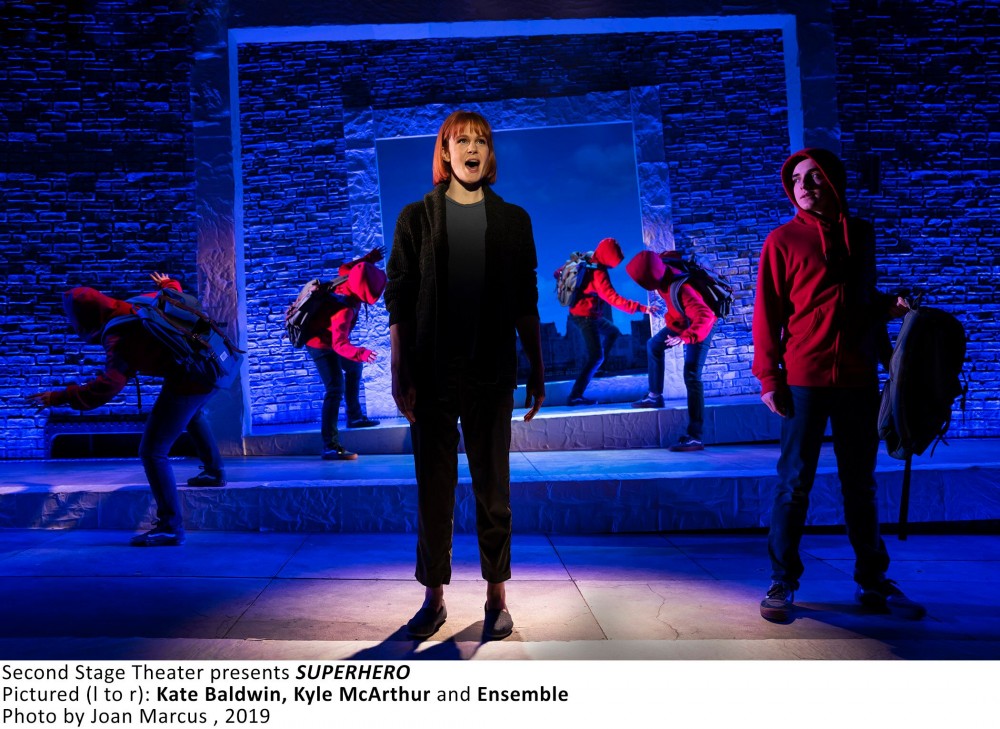 Enter the mysterious man from Apartment 4B (Bryce Pinkham). A loner named Jim, devoid of social skills, he’s just lost his job as a bus driver. Unseen on his fire escape haunt, Simon watches as Jim flattens a fire hydrant in a pique of anger, then restores it in a second stroke of superhuman strength. Only a superhero could have such power. Is this the real McCoy? Simon is determined to find out, using his mother as bait. At Simon’s beckoning, she invites Jim to dinner, and, after a halting start, a tiny spark ignites.

Then, wham! Jim has to leave, immediately, no explanation given. Presumably he’s off to save someone somewhere, but all we see, as does Simon from the fire escape, is Jim on the roof, an explosion of dazzling light.

By Act II, Kitt’s score is in full bloom. Melodies take off, with each of the three principals showing they can hit a number out of the park with style. There are also some lovely, if short, duets, with Baldwin and Pinkham blending beautifully.

Act II is also confession time. Pinkham’s deadpan is perfect, and slyly funny, as Jim tells Simon, “I’m from another planet.” He came to earth to help those in need, which is all well and good but makes a social life – and a relationship with Charlotte – difficult. He’s always on call. (Script could be clearer how this works. John Logan’s book is otherwise well-constructed but could use a greater sense of urgency.)

While Jim and Charlotte grapple with romantic logistics, Simon’s artistic abilities earn him points with Vee (Salena Qureshi), for whom he has silently pined since before the play began. So there’s plenty of opportunity for a boy-gets-girl ending, but that happens only in the most oblique sense. 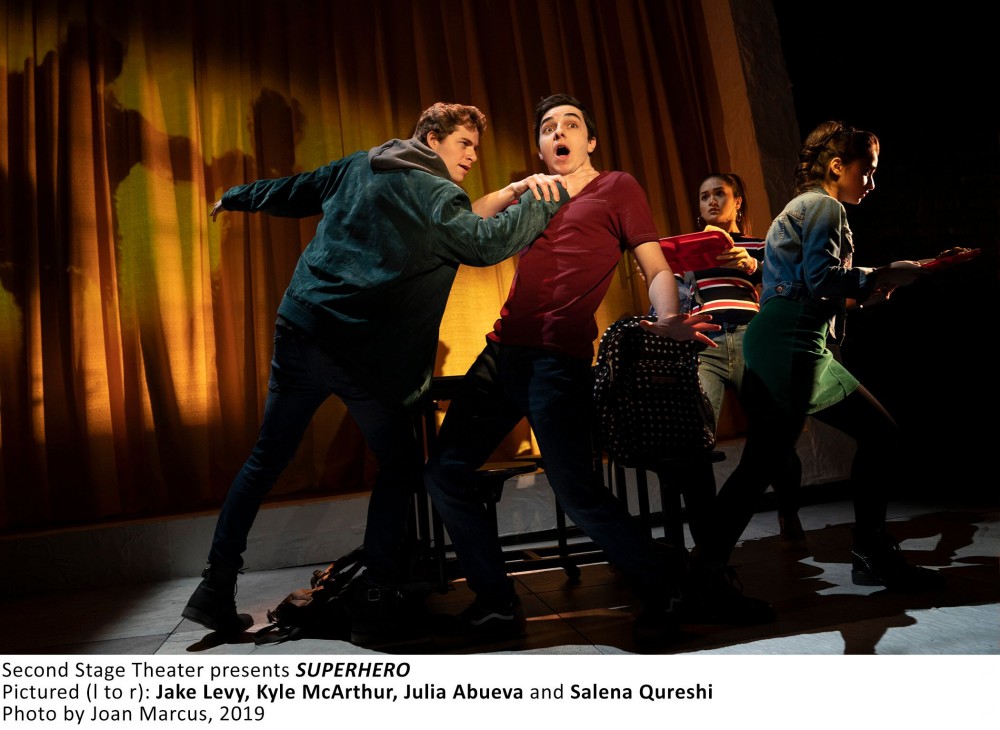 As Simon, McArthur skillfully balances hormone-fueled teenage angst with longing for a hero to worship. Baldwin gives a performance that’s jaw-droppingly grounded with pristine clarity. Pinkham’s Jim is perhaps the most interesting character in terms of development. He goes from being completely withdrawn to believably, if tentatively, social. One small step for man, one giant leap for beings from his home planet.

Beowulf Boritt’s set combines minimalist realism – table and chairs, sofa, fire escape – with a hint of surrealism – large, slightly off-kilter comic book frames that double as windows. Jason Moore’s direction is crisp; he certainly gets the most out of his winning cast. 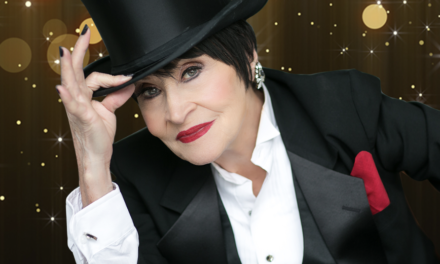 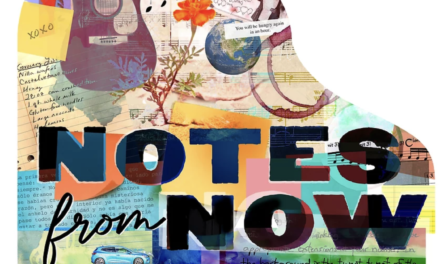