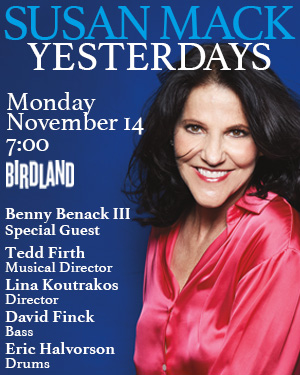 Following her recent sold-out performances, Susan Mack returns to Birdland November 14th @ 7 pm to debut Yesterdays, a new show with a diverse, uplifting and timeless set of Standards.  These songs of yesterday transcend the era in which they were created; their messages and the emotions they elicit are still powerful, relatable, and relevant today.

In Yesterdays, Susan performs selections from the Great American Songbook, including jazz standards and a tribute to Ella Fitzgerald.  Included are songs by Jerome Kern, Duke Ellington and Chick Corea, as well as Stevie Wonder and The Beatles.

Vocalist Susan Mack is a native New Yorker with a lifelong passion for singing and performing. Life initially took her on a different career path but she’s back on track and thriving in her musical Chapter II. Susan was nominated for Best Female Vocalist for the 2022 Annual MAC Awards.  Her 2018 debut show, “Nobody Else But Me”, directed by the legendary Marilyn Maye, was also nominated for a MAC Award for Best Female Debut.

Over the years, Susan has brought her unique combination of jazz and cabaret singing to performance venues around the country including Davenport’s in Chicago, The Jazz Cave in Nashville and New York’s most well-known clubs including Carnegie Hall.