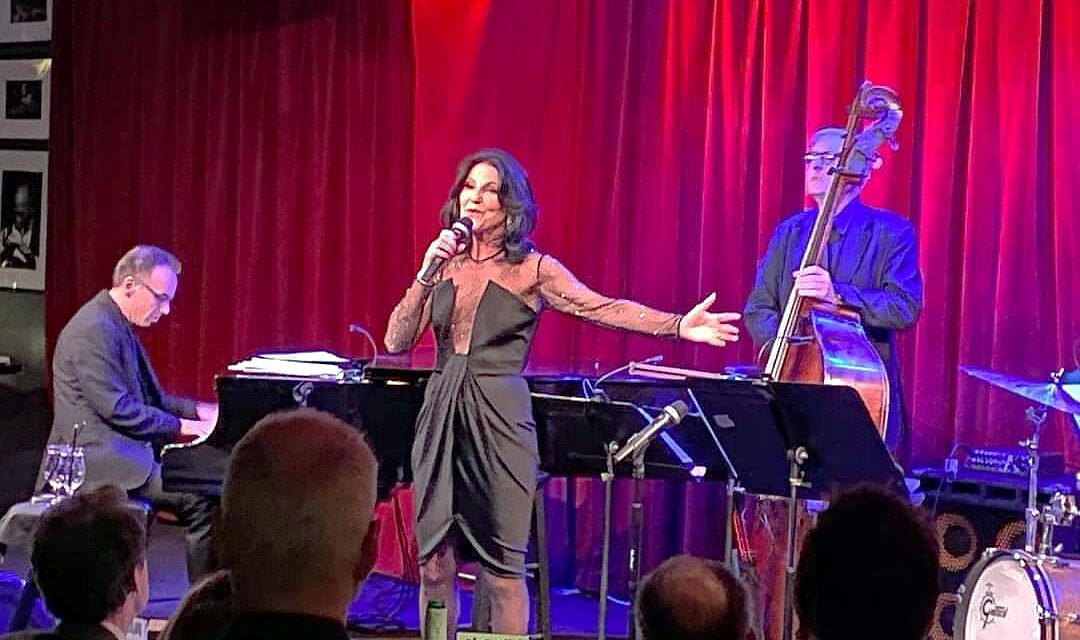 Susan Mack is the living embodiment of the saying, “Hard work pays off.”  Long successful personally and professionally, and beloved in her community, she did not pursue singing professionally until much later in life.  Only a few years ago she was making the rounds at open mics.  Susan took on performing the way she takes on everything and now, she consistently sells out shows at Birdland.  After several capacity shows downstairs at the Theater, she earned a coveted spot in the much bigger main room upstairs.  Once again, she sold every seat in the joint.  Susan has long had an ability to connect with her audience.  Since we last saw her exactly a year ago at Birdland Theater, she has taken giant leaps in her jazz singing, with bold risks that generally earned solid payoffs.

They say “teamwork makes the dream work,” and Susan has an excellent team.  In addition to show director Lina Koutrakos, she was backed once again by the magnificent musical director and pianist Tedd Firth, bassist David Finck, and drummer Eric Halvorson.  For Yesterdays, the young trumpeter and vocalist Benny Benack III joined Susan for several songs.

Susan is a lovely woman, wearing a beautiful, black satin and sheer mesh outfit that complemented her fit and firm figure (another testament to her commitment to excellence).  She got off to a great start with Cole Porter’s “All of You,” which started with a slow verse before swinging with what could be described as a fascinating rhythm and key changes.  Her jazzy vocal choices immediately showed off some newly developed skills.

Reflecting on the show’s title, Susan noted that all the songs were about “yesterday, my yesterdays.”  For the matching song title, “Yesterdays,” the wonderful Benny Benack III joined in on trumpet for the first of several songs throughout the set.  Ballad gave way to swing with a bass-driven rhythm, and Susan and Benny traded riffs in a gem of a surprise.  Ms. Mack seems to have taken note of my comment in our previous review about her reluctance to commit a ballad to heart during a segment of songs she associated with Ella Fitzgerald, starting with “In the Wee Small Hours of the Morning.”  An intense, blues ballad, “Black Coffee,” was hotter than a cup of joe, gradually intensifying in urgency, and melded back into “Wee Small Hours” for its denouement.

Some of Ms. Mack’s best singing came on Duke Ellington’s “Sophisticated Lady,” buttressed by Mr. Firth’s magnificent voicings.  It was also fascinating to learn that Duke was inspired not by a lady in a nightclub, but by several of his grade school teachers who would tour Europe during summer vacations.

Mr. Benack really earned his keep, both singing and playing on a terrific duet of “Pick Yourself Up” from Swingtime, with Benny playing Fred to Susan’s Ginger. When Benny lost a sheet of music, Susan deftly handled the unintentionally funny moment with humor and aplomb.  (Mr. Firth delivered a spare copy of the lost sheet to Benny.)

An interpretive high point came in “Where Do You Start,” the stunning Johnny Mandel breakup song with lyrics by Alan and Marilyn Bergman.  Here, the bass and drums “took five” while Susan and Tedd worked together intimately.  Despite her own long and happy marriage, Ms. Mack was able to effectively inhabit the nuances of the song.

She closed her set with Stevie Wonder’s “Overjoyed” and an enthusiastic standing ovation, garnering an encore of a lovely take on Lennon and McCartney’s “In My Life.”

Susan Mack is a good singer with a warm voice and presence.  At times, her talents are eclipsed by that of her stellar musicians.  While Susan is not a natural, she has clearly worked hard to learn the craft of jazz singing, and she gives the proverbial 110 percent.  In the “four stages of competence,” she has mastered “conscious competency.”  Her growing language of performance skills and vocal mastery feel thoroughly rehearsed and largely impeccable, without being internalized (unconscious competence).  She may sound to most ears as if she is improvising, though even the improvisations seem rehearsed.  This is more evident in her swing numbers, where her timing occasionally falters slightly, while she sounds more natural and connected on the ballads.  Her patter, too, is a little stiff at times.  Some performers, like Marilyn Maye, can make every line and joke sound off the cuff, but that is the result of decades of practice.  That said, I believe Susan has the discipline and sufficient ability to ultimately achieve that level of performance.  Her future in jazz and cabaret looks bright.