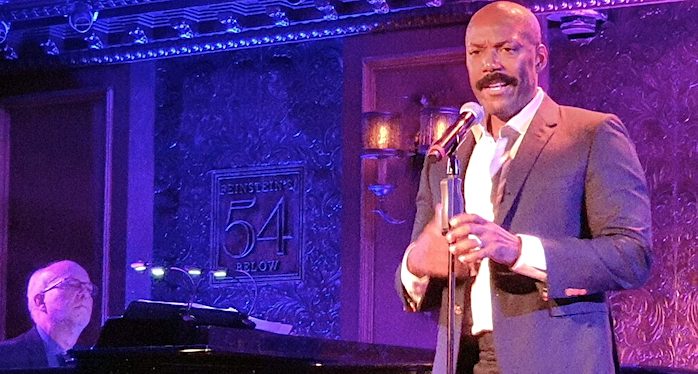 Actor and singer T. Oliver Reid has a long history on Broadway having played some dozens of roles in some 13 shows, often as an understudy or “swing” performer.  He currently stars in Hadestown (he replaced André De Shields as Hermes in June).  Mr. Reid, also a cabaret performer with many awards to his credit, including a Bistro Award, a MAC Award, and the Julie Wilson Award from the Mabel Mercer Foundation, brought his considerable talents and charm to 54 Below with A Sunday Kind of Love, an intimate show backed only by music director Lawrence Yurman on piano.

A Sunday Kind of Love is a collection of primarily “Great American Songbook” material, though Mr. Reid threw in a few newer songs later in the set.  (Surprisingly, the song “A Sunday Kind of Love” did not make it into this show.)  Several of his Hadestown costars were in attendance, including Reeve Carney and Eve Noblezada.

One cannot copywrite a song title, and Mr. Reid sang Harold Arlen and Ted Koehler’s lovely ballad, “Let’s Fall in Love,” as opposed to the mildly risqué Cole Porter song of the same title, which asserts that if such creatures as “educated fleas” can “do it,” then “let’s fall in love.”  This made the next choice, Noel Coward’s “Any Little Fish,” all the more interesting, as it could stand in for the Porter song with lines like:

Mr. Reid cut a sharp appearance in a charcoal suit with brass trimmings over a white, open-necked dress shirt.  He opened with a medley of seemingly disparate songs, “In the Wee Small Hours of the Morning” (Hilliard and Mann) and “Hello Young Lovers” (Rodgers and Hammerstein) in waltz time, his voice soaring in the last part of the medley.

Taking a stool for “The Nearness of You” (Hoagy Carmichael/Ned Washington), and singing the very rarely performed verse, Mr. Reid made this into an intimate saloon song that would have been at home in a Bobby Short show.   The star reached an early highlight through his powerful, emotional reading of “Spring Can Really Hang You Up the Most” (Tommy Wolf/Fran Landesman), with Mr. Yurman’s fake-out intro of “Spring is Here.”  It was one of the finest renditions of this song this reviewer has heard.

When Mr. Reid performed Cole Porter’s “I’ve Got You Under My Skin,” he sang with a certain power and conviction that turned the title into a bold statement.  He added a short solo ballroom dance mid-song that was a sweet addition.  The Cole Porter number led to charming stories about his 12-year relationship with his partner, and their time in France, and a Porter pairing of “I Love Paris” and “You Don’t Know Paree.”

“Summertime” (George and Ira Gershwin) was astonishing because here, Mr. Reid took on the full soprano voice of the female character who sings this lullaby in Porgy and Bess.  With your eyes closed, you might have guessed Leontyne Price was at the mic.

Mr. Reid performed a medley of two songs traditionally done as duets, both with lyrics by Alan and Marilyn Bergman, arguably the greatest lyricist couple of all time.  His rendition of “You Don’t Bring Me Flowers” (music by Neil Diamond) was beautiful and sensitive, effectively conveying the end of the relationship.  Pairing this song with “How Do You Keep the Music Playing” (music by Michel Legrand) seemed a bit inside-out as a narrative, but his powerful voice and interpretation was just right.

The most contemporary number was a medley of “Gravity” (Sara Bareilles) and “All of Me” (John Legend). (This was not the Gerald Marks/Seymour Simons jazz standard of the same name.)  This coupling works both lyrically and musically.

The performance ended with a brief reprise of “In the Wee Small Hours of the Morning” with “So Long, Farewell” (Rodgers and Hammerstein) from The Sound of Music.  Oddly, Mr. Reid insisted early in the evening that the show was “not perfect yet,” but it was pretty darn close.