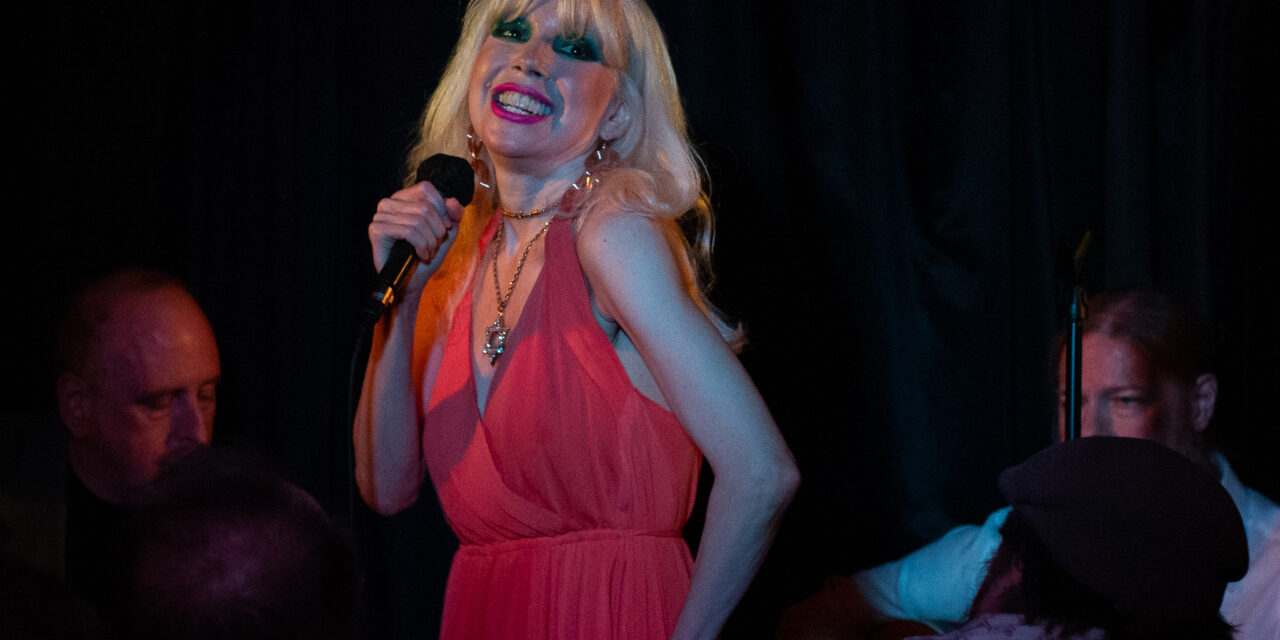 One of the questions that tickled my brain over the past year whilst pouring over countless hours of Britbox and reruns of 1970s game shows, and hoping that creative types were doing the same, but also creating new shows for the post-quarantine world, is what Tammy Faye Starlite’s next cabaret performance at Pangea would look like. For years she has delighted downtown audiences with comprehensive full-album covers of the likes of Nico, the Rolling Stones (a different, classic work every week for a month!) and Marianne Faithfull. Her shows, always a musically perfect paean to the record being covered, were also slyly sardonic, poking fun at the narcissistic divas who filled our heads with incredible music for so much of the 1960s and 70s. So, I wondered, as I gobbled junk food and shouted answers at long since deceased “Match Game” panelists, what would it be?

Well, the wait is over. Tammy Faye has doubled down and created a new character altogether:  Israeli-born singer, actress, and chanteuse, Tamar! and her show, “Yesterday, Today and Tamar!” advance press tells us the “internationally known” Tamar, The Belle of El Al, “is the winner of two Giorgio Awards for Best Spoken Word Disco Performance by a Non-Belarussian Female Solo . . . [and] arrives in the Big Apple after a triumphant three-weeker at The Pink Reef in Coral Gables.” If that doesn’t give you an idea of what you’re in for, nothing will.

Part Andy Kaufman, part Borat, Ms. Starlite’s “Tamar” is a fully blossomed parody, though what she’s a parody of is hard to pinpoint. Arriving on stage in a sleeveless hot pink ball gown highlighted by a sizable diamond-encrusted Star of David, large, cascading gold hoop earrings, and blue eyeshadow so thick it was best suited for a glam raccoon, she greeted the enthusiastic Pangea crowd with . . . “Nights in White Satin”?! The song, a schmaltzy wedding reception favorite by the British progressive rock band The Moody Blues, is popular among Renaissance Fair attendees, and ends with a cringey spoken word poem, “Late Lament” (“Impassioned lovers wrestle as one/Lonely man cries for love and has none.”) which was written by the band’s drummer and sounds like it. Tammy Faye rolled right into the thing, with utter sincerity, much to the astonished howls of delight from the crowd. From the opening number, she established a firm commitment to the bit.

Other lamentable erstwhile hits followed, like “El Condor Pasa,” the Peruvian folk song popularized by Simon and Garfunkel. “That was an ancient Peruvian song appropriated by Jews,” quipped Tamar, “It’s what we do.”

In between songs, Tamar reminisced and name-dropped about past glories—her 159 appearances on the Merv Griffin show; appeals from Scoey Mitchell who told her “America needs you;” and Belgian paramours—then launched into songs in both English and Hebrew. Songs were both surprising, “In the Year 2525,” and romantic “Suzanne” (Leonard Cohen), but most showed off a stunning vocal prowess, including a powerful vibrato that brought a rousing round of applause. While Tamar may have been an absurd character, Tammy Faye was once again an amazing singer.

Directed by Rachel Lichtman, “Yesterday, Today and Tamar” features Starlite’s usual bandmates, Eszter Balint (violin), Richard Feridun (bass), Keith Hartel (guitar), and David Nagler (piano), who’ve been together so long now they’re a smooth-running, flawless outfit. Tickets might not be easy to come by, given that the room is cozy and Starlite now has a rather devoted following. But if you want to finally get out and enjoy some fantastic laughs and even better music, this show is not to be missed. You don’t want to go through the next quarantine wondering why you didn’t see the world-famous Tamar when you had a chance.