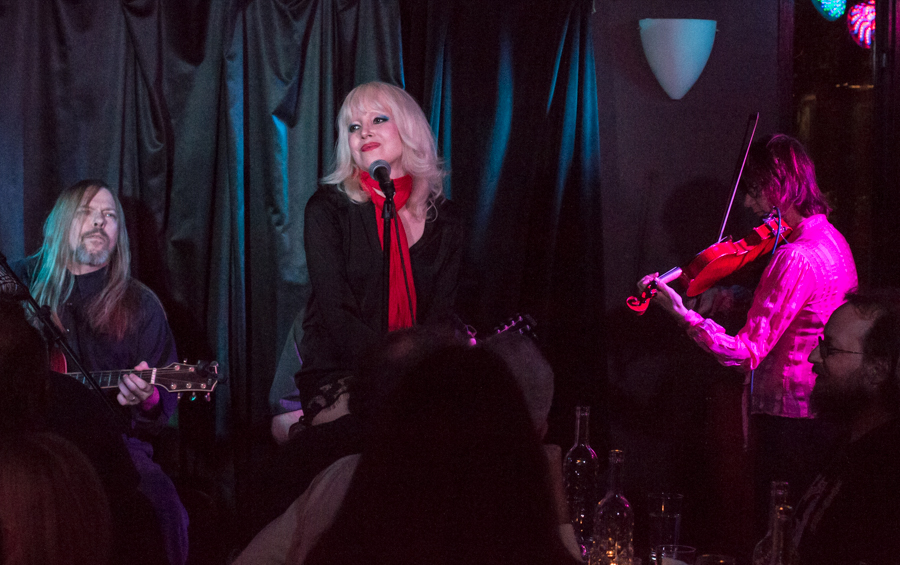 There is no greater sign of a rock and roll cover band’s devotion to an artist than playing one of its albums in its entirety. Tangentially, it’s a true fan that wants to see their favorite album covered, not just hits. So Tammy Faye Starlite’s month-long residency (at Pangea in the East Village) in which she and her band cover a different Rolling Stones album every Thursday in “Just a Kiss Away” is not merely a series of shows, it’s an event. Billing the series as a “rock ’n’ roll Valentine” to Mick and Keith, Starlite has announced her reverence and respect for one of the world’s greatest (and certainly most prolific) rock and roll bands.

The albums Starlite has chosen to perform in their entirety represent, arguably, the “meat” of the Rolling Stones’ oeuvre—what many ardent fans would consider their greatest period, from 1968’s Beggar’s Banquet (performed October 5) to Let It Bleed (October 12), Sticky Fingers (October 19) and (most of) the double LP, Exile on Main Street (October 26). The first album performance of the series, Beggar’s Banquet, which I attended, was classic Tammy Faye and all Rolling Stones. “Not to be too solipsistic,” she winked, referring to her tendency to break her often perfectly performed character (whether it be Nico, Marianne Faithful, or, in this instance, Mick Jagger), to either comment on current events or on the personage themselves: “Excuse this ridiculous accent,” she purred. Was she talking about Mick’s or her impersonation of Mick? Who knows? That’s part of the joy of her performances.

The first track on Banquet is on the all time great Rock and Roll anthems, “Sympathy for the Devil,” a commentary on the evils of society, headily informed by, among others, Baudelaire and Mikhail Bulgakov’s seminal novel The Master and Margarita. Whereas The Stones’ original version is intense and, at times, howling with rage, Tammy Faye deviated, with a slower, loungy version that pointed out, quite unexpectedly, a more melodic side of the song. As with every song that followed, Starlite’s band was spot on, and could’ve stood in for the originals with Keith Hartel on guitar; Richard Ferdun on a Dobro lap guitar providing the albums twangy, country-esque sound; Eszter Balint on violin and David Dunton on piano. (David Nagler plays piano in the October 19 and 26 gigs.) Most of the rest of the album—save for the side two opener, the power hit “Street Fighting Man,” —is more bluesy, and flecked with a country sound in the Stones’ interpretation of the style. Tammy Faye mined it for all its soulfulness, taking songs like “Parachute Woman,” and wandering through the crowd, kissing some of the women as she passed. “All of a sudden I became Richard Dawson,” she cracked.

Tammy Faye’s uncanny ability to both mock and adore the characters she plays is the secret to her performances—aside from her outstanding singing voice and ability to capture what made her characters (in this case Jagger) great. She has the vocal inflections, the half-note hand clap, and the strut. Without a costume, save for a Jagger-esque long red scarf, she becomes Jagger on stage. She’s in his head and not only understands him, but why we love him, and she’s able to pour it into her performance. But here’s the downside to this rave review: after the first show all the remaining nights sold out immediately. Word gets around. It’s an important enough concept that she undoubtedly needs to revive it (soon: over the winter, perhaps) and let more die hard fans (of both Tammy Faye and the Stones) see these truly incredible and important performances. Meanwhile, the final show, “Exile on Main Street” is tonight, Thursday, October 26. Tickets are indeed sold out online, but why not go down and see if you can get in anyway. I know it’s the rock ‘n’ roll way to do things. But I like it.