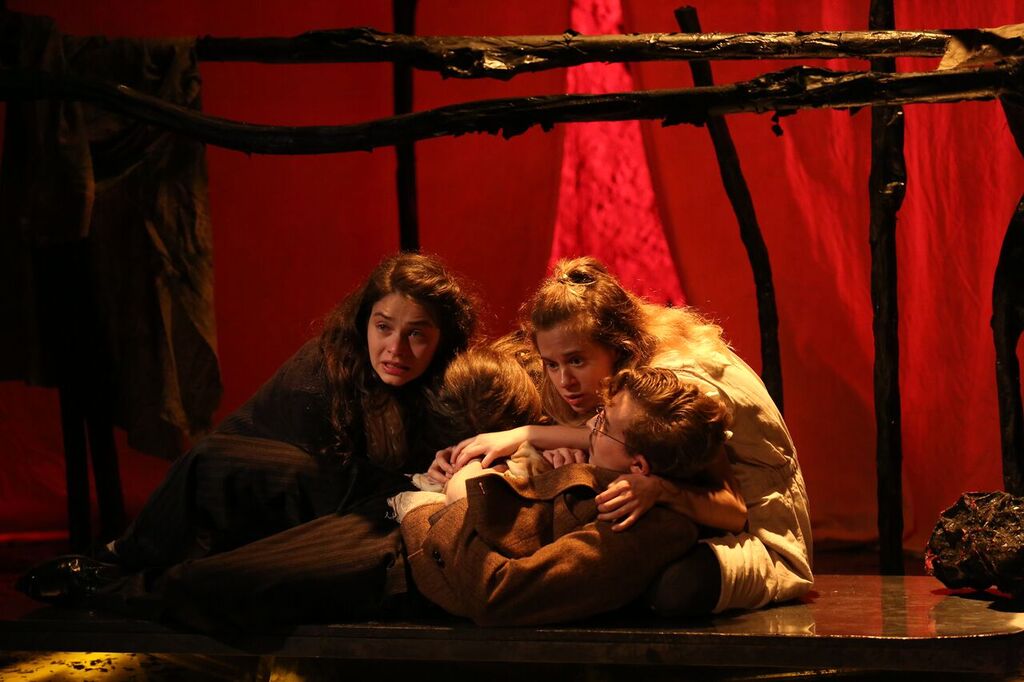 Terezin, a tragedy written and directed by Nicholas Tolkien is in a World Premiere at The Peter Jay Sharp Theater, New York City. The two-act play boasts an international cast and has undertones of expressionism and Brechtian power, thanks to directorial conceptualizations assisted by the talents of Charlotte Bydwell (Choreographer), Amanda Szabo (Lighting/Projection Design), Katy Jarzebowski (Composer/Sound Design) and Anna Driftmier (Scenic Design).

Based in part on The Terezin Diary of Gonda Redlich, Tolkien explores how Alexi (in a heartrending and dynamic portrayal by Natasa Petrovic), and Violet (Sasha K. Gordon is wonderful as the young Violet who watches her parents killed at the hands of the Gestapo) end up together in Terezin. In the play both young girls attempt to survive the horrors of Terezin concentration camp with their love for each other, prescience and inner strength. Before the Nazis converted Terezin into a concentration camp and ghetto in 1941 during World War II, the town which is thirty miles south of Prague in the Czech Republic was once a holiday resort reserved for Czech nobility. Terezin is contained within the walls of the famous fortress Theresienstadt, created in the late 18th century. Its prior reputation as a resort was used by the Nazis to deceive those they rounded up and forced to work as slave laborers until the Final Solution was decreed (1942) and deportations to Auschwitz and other camps in the East eventually became a regularity.

Those who were slave laborers in Terezin were primarily Jews from Czechoslovakia. Many of them were famous musicians, scientists, actors, artists and poets who were with their families and children. Tolkien backdrops the interaction of his protagonists with details of events that occurred especially in the last year of the camp under Commandant Karl Rahm until the liberation by Soviet soldiers. Tens of thousands of German, Dutch, Danish and Austrian Jews were deported to Terezin, 15,000 of them children. There they stayed until more room needed to be made and they were deported to death camps. In Tolkien’s production we are gratified to see that a few of the children are able to make it beyond the high gates of the fortress of hell and damnation that the Nazis created to torture innocents.

What makes Tolkien’s production a mesmerizing work is in how its characters rise above the brutality and sadistic mania of their captors. Two exceptional portrayals are by Michael Leigh Cook (as disturbed camp commander Karl Rahm), and Blake Lewis (as a nefarious SS Platoon Leader). Indeed, the ensemble’s work together (the captors and captives) is just terrific. The themes of Terezin are outstanding. In the extremes of horror there is beauty through art and music. In the face of nihilism and genocide there is the hope of redemption and life. Additional elements that make this production memorable are the stylized and symbolic effects. These cleverly mirror the following themes: the destitution of humanity parallels the human spirit’s ability to have faith; and, the immutable spirits of those who have passed live on in the memories of the living. Tolkien reveals this when characters who have been murdered by the Nazis appear spiritually/in their imagination and give strength to their family members during extreme trials of torture and threats of destruction.

For example Alexi’s mother Isabella (portrayed by the feeling Sophia Davey) a renowned violinist, dies before Commandant Rahm is able to take violin lessons from her. Rahm seeks out daughter Alexi to teach him the violin, a failed endeavor. During a concluding scene between Alexi and Rahm, Isabella returns in spirit/in her imagination to strengthen her daughter for what is to come.

These directorial nuances and choices by the artistic team elevate this work to a fine artistic symmetry and create a poetic dramatic design. The spiritual inner loveliness of the captives is contrasted with the base, vile and demeaned souls of the Nazis throughout. The imagery and expressionism of the set, shadowed lighting (the red light is particularly foreboding), the tortured, iron-looking tree-shapes, the use of wood and sheets to evoke the buildings of Terezin, the barracks and more evoke the terrible world that the victims of the Shoah endured and/or perished in. Tolkien’s production is a memorial to all who lived and died there. 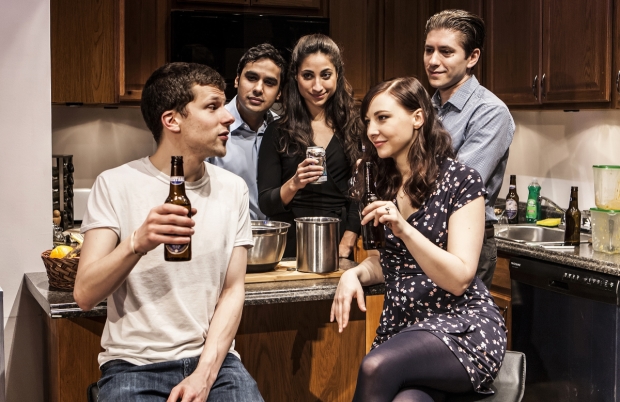 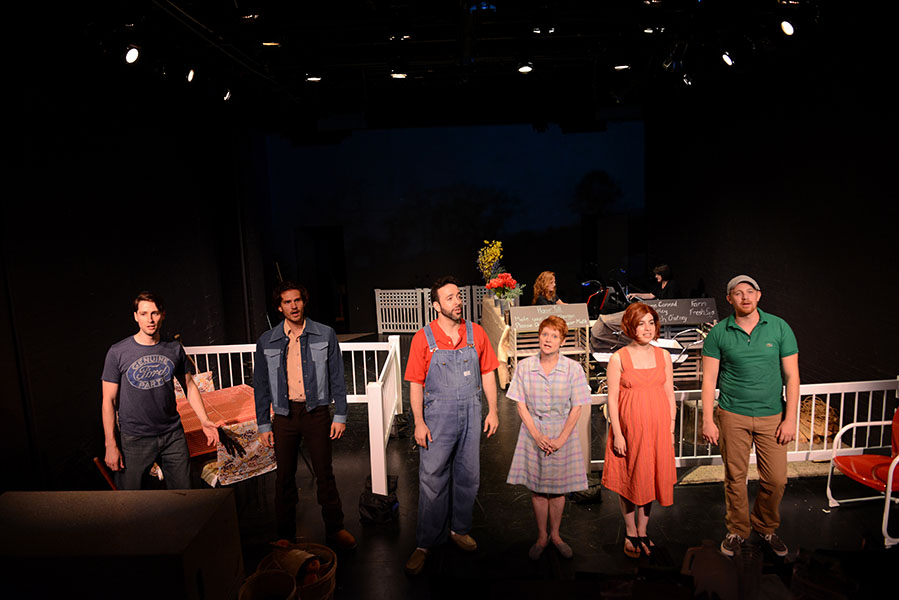 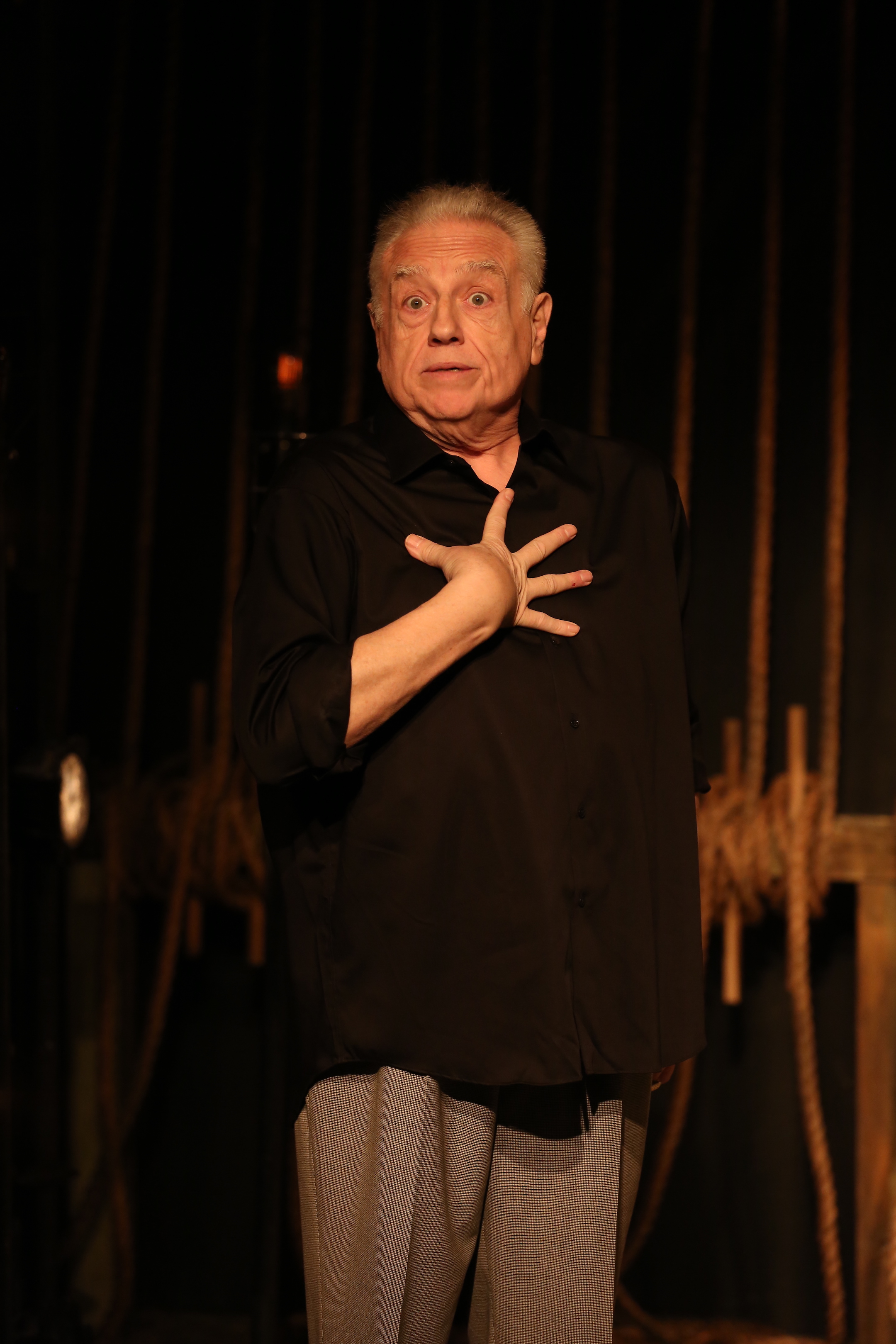 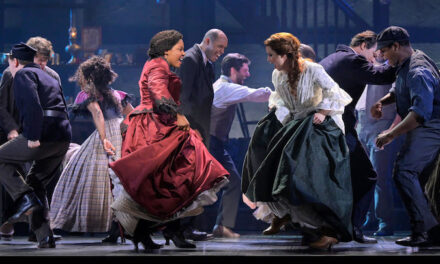